Edge of the World

Routes in Ed and Terry Wall

An exciting lead on the best wall in Rock Canyon.

Climb up a bit to a bolt with a dark gray, painted hanger. Just before the bolt is a decent horn to sling if you choose.

Continue up past another bolt to the left edge of a large flake (Flakes climbs up the other side of this feature).

Climb up to and past a small roof that abuts the flake and then continue to the bottom right of the final roof. Up and over the roof to the first of three modern bolts. Continue on to the chains, trending left just a bit.

Two bolts at the start, and then good gear to the small roof that appears a bit past midway on the route. Three more bolts to the anchors. Being a chicken, I put a supplemental nut between the penultimate and the last bolt.

This is listed in the Ruckman guide as 5.8 R, but I didn't think it was R, or really even PG13. Perhaps it was modern gear, or perhaps just wishful thinking (some of the placements were pretty small, and it is quartzite which does tend to brittleness).

If you plan on lowering off or slingshot toproping Edge of the World it is just barely doable with a 70m rope. Make absolutely sure that the belayer is tied in to the rope, because a 70m probably doesn't reach all the way up and back down (mine was a little more than 10 feet short, but I measured it a while back at 66m unstretched). Have the lowering climber end up left or right of the belayer up the wall just a bit on one of the small ledges.

Rappelling with a 70m would be tricky; I wouldn't risk it.

On the left side of the main Ed and Terry Wall there are two medium-sized, angled roofs. Edge of the World starts on a line just to the right of the place where the upper of the two angled roofs terminates.

The start is pretty obvious because of the bolt with the gray-painted hanger. Note that I have seen two different printed topos for Edge of the World, each with a slightly different start. One shows Edge of the World starting a bit right of the above-mentioned location (i.e., bypassing the starting bolts); why you would start there is a mystery because you would just end up climbing to the left to get on the left side of the large flake mentioned in the description.

Lower (carefully) with a 70m rope, or walk off south from the top, down the gully a ways, then back to the face. 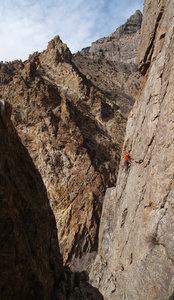 Perin Blanchard starting on Edge of the World.… 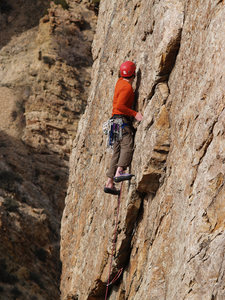 Perin Blanchard above the final, mini-roof on E…

More About Edge of the World