Revenue and Camp Bird Mines have resumed mining activities further up Camp Bird Rd. A new sign posted in February 2013 caused some tension as described in:

Please refrain from blocking the road, yield to oncoming mining vehicle traffic, and be careful of rockfall and icefall. Please share the road to minimize future access issues with the road's multiple user groups.

This is a lesser known little gem in the Skylight area that doesn't appear in the guidebooks. A fair flow forms some moderately steep water ice in a discrete cleft in the rock above Chockstone Chimney.

Climb approximately fifty feet of rarely touched ice to a cruxy top-out in thin ice, snow and rock. Wallow up the gully through the snow to an anchor about one hundred feet up on the right.

Descend by rapping off the anchor with two 60 meter ropes to the base of the climb or by rapping into upper Chockstone Chimney.

Beware of attempting this climb after a night of heavy gin drinking followed by a greased Sysco breakfast at the Silver Nugget... or the 'Skillet' may just have its Revenge! Bring a blue bag if you're prone to such behavior.

After climbing the ice that forms on the left side of Chockstone Chimney, you will find this little gem by wallowing a couple hundred yards up through the snow. This is not the ephemeral ice that forms in upper Chockstone Chimney if you continue up the gully past the giant chockstone. However, in a big snow year, you can access this climb by heading up the gully past the giant chockstone and heading left at the spruce trees. From there, it's only fifty feet until the climb is visible. 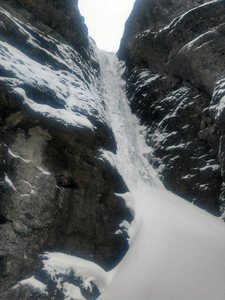 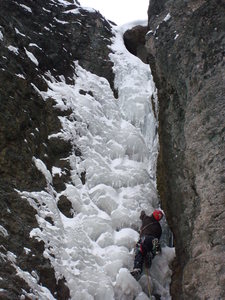 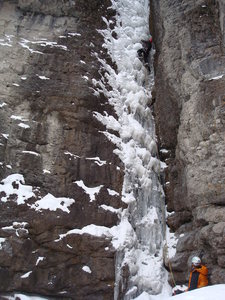 Matt (belaying) just prior to getting clocked w… 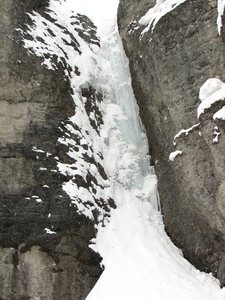