The sandstone here is easily damaged when wet. Please allow at least 24-48 hours before climbing after any precipitation. If the ground is at all damp, please do not climb on any local sandstone. Consider nearby options on basalt, limestone, granite, or plastic instead.

A two-pitch sport climb on crispy varnish features, with a slabby move thrown in here and there.

P1 Climb up to a bulging flake and clip the second bolt. Getting past the second bolt is the most difficult move of the pitch, but a little thought and balance will see it through. After the second bolt trend generally right using varnish knobs and features to the anchor.

P2 Didn't get to climb it, but the pitch starts up from the P1 anchor and trends left to an anchor on top and at the right of the overhang that is above and to your left while at the P1 anchor.

Get to this via the "second tier" ledge in the Sand Dunes area of the Island in the Sky formation.

At the top of the 3rd-class gully that leads to the second tier, head south (right). Pass two bulging buttresses on your left. What's New Pussycat is on the third buttress, just past a gully. There is a drilled pin route (Stranger than Friction) across the gully to the left of this bolted line.

Looking up the midpoint rappel anchor is obvious with its slings.

P1 9 bolts to a two-bolt anchor. The guidebook says 8 bolts.
P2 8 bolts (according to the guidebook).

Rappel from the P2 anchor straight down to a midpoint rappel anchor with slings that lies to the left of the P1 anchor. Rappel from there to the ground.

Rappelling from the P1 anchor is also easy since the hangers are Metolius rap hangers. 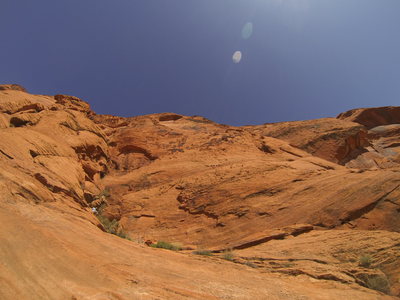 Looking up at Whats New Pussycat from the botto… 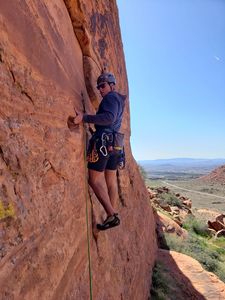 At the first clip 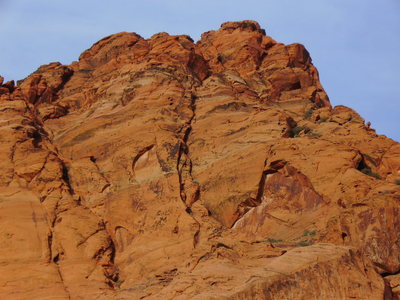 Looking at the Pussycat 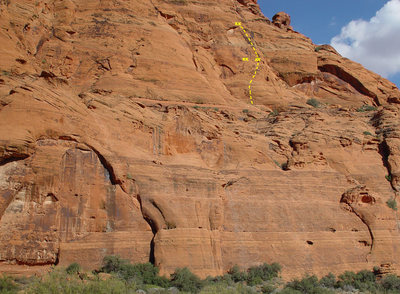 What's New Pussycat 5.10a View from the road.