Park at the new Slesse Memorial trailhead area. Its quite obvious where the road widens for parking and there is a skinny sign post indicating the trail. Follow the easy Slesse Memorial trail to the infamous propeller cairn where most mortals stop to take selfies. Climbers continue north across slabs traversing level across rock slabs then angle downwards along the base of the buttress separating you from the bypass glacier. Find a short gully to scramble up positioning you in a notch that you drop down (4th class, often wet) into the cirque of the bypass glacier. Traverse more cool slabs angling straight up for the bypass ledge at the head of the bowl. Careful overhead for ice fall hazard here. There is a large ledge above (climbers left) as you enter the cirque that holds ice and snow late into the season (you can not see it from below). You do not have much time to react if anything comes down. Move quickly until you are out in the center of the slabs. Normally there is a large remnant piece of glacial ice melting on a ledge at the head of the cirque that provides water to refill your platypus for the climb.

This is an absolute classic route, one of North Americas 50 Classics with excellent climbing, exposure, and adventure. It is not to be underestimated though, as it is also very remote and requires a certain amount of detailed planning and luck with the weather. It can be climbed in a day by very fast climbers, but most parties take 2 long days. Day 1: get an alpine start and hike and climb to the bivy ledge at 2/3rd height. Day 2: get another alpine start and finish the route then descend and hike back to your car at the trailhead. The bivi ledge can sleep up to 6 climbers and there is a seasonal snow patch that provides water otherwise climb with an extra liter of water for the bivi. Additionally, you can bivi on the summit or many places on the descent and along the Crossover Pass descent route.

Be prepared to carry extra water. you can usually refill from melting glacial ice near the bypass ledge start and sometimes melting snow on the bivi ledge. The bivi ledge melt water is short lived and tough to time it right. Its a good idea to climb with an extra liter in reserve.

There is an excellent topo available on NAClassics.com (edit note: this site is no longer active, here's an alternate provided by J.Roatch: lamountaineers.org/NAC/brow…), and Kevin McLane's Alpine Select covers all of the bases. I will provide only a brief description of the climbing here, along with access information.

The Bypass Ledge accessed from the pocket glacier amphitheater avoids the first 6 pitches of the NE Buttress Direct (5.10C).

From the top of the Bypass Ledge follow 4th class, bushy climbers trails upward. The climb generally follows the crest moving back and forth, and going around a prominent gendarme. Many variations are possible. It is a mix of 4th class and moderate (5.7-5.8) 5th class climbing

At approximately pitch 14, there is a 5.10A variation that stays on the crest. The actual route is right of the crest after a short traverse. Making an upward arcing ascent for 3-4 pitches of 5.6 out right then back climbers left to the crest near the top. One more short pitch leads you to the large bivi ledge. This is very enjoyable and well protected climbing. If you stay on the buttress crest it is less well traveled and not as well protected. Depending on timing and conditions there is sometimes a melting snowpatch near the bivi ledge that can provide water otherwise you need to carry extra.

The climbing above the bivi is 4th class for about 3-4 pitches. Early in the season this section holds snow. By the time the bypass glacier has melted or avalanches away, this section is normally dry. The last 6 pitches above the 4th class section are very enjoyable climbing on the crest with massive exposure! The 5.8+ pitch is super fun with great protection and a fixed pin or two. There are several nice ledges to bivi on this upper part of the climb. If the summit looks in sight but the climbers are loosing might, you can bail left just above the first 2-person bivi ledge into 4th class terrain leading to the summit ridge. Look left around the buttress and a small ledge leads into a shallow baisin with all 4th class scrambling to the summit ridge. Strong climbers can simul-climb a lot of the route greatly speeding up an ascent.

You are only half way finished on the summit (maybe less even). The descent for Slesse is the crux. Do not underestimate the time and energy it takes to get back to your car. Plenty of pretty bivi sights exist through the alpine zone as you navigate back to your car. Plan an extra day and if you get tired call it a day and snooze in the alpine.

From the summit head south west along the summit ridge (~200m) to where you can scramble down (skiers right) on 3rd class terrain for a pitch. Continue south west'ish to a 4th class section. Down climb to a large block (~3 pitches below the summit) with slings for rappelling. Make one 30m rap to a scree slope then walk down skiers right to behind a large gendarme. You should be looking somewhat skiers right down a long gully (note: gully skiers left is a big mistake) and the trail steepens into 4th class scrambling. At this point some climbers rap this gully on manky anchors with lots of loose rubble to a point low enough (~6 pitches) where you traverse skiers right on 3rd class terrain and look over the edge to the open west talus bowl. This option will get you home - just be careful of loose rock when you pull your rope rappelling.

The other option from behind the gendarme is to scramble hard skiers right on 4th class terrain to access a ledge system on the west face. Follow these ledges with some 3rd and 4th class sections dropping down at one point ~30m, across the head of a scree gully traversing across to another scree gully that provides easy access to the west side descent trail. Head down the 2nd scree gully picking up the west side trail.

Once on the west side hiking trail follow Jeremy Frimers Crossover Pass PDF beta just until Crossover Pass (not all the way). Recently a landslide wiped out part of the descent trail below a rock face known as "Stumpy" after Crossover Pass. A new descent has been created from in the pass where you rappel a route called Crack Of Noon Club. Once in Crossover Pass follow obvious flagging and cairns leading southward out from the pass to the front of a buttress where you'll find the first rap anchor skiers left on a rock face. 11 raps with a single 60m or 10 raps with a single 70m rope land you on the talus. The raps are all bolted with big ledges and easy to find with flagging. From the bottom, follow cairns and flagging traversing down across the talus into the forest meeting the original descent trail. Once in the talus its 6.5km, ~2hours left to the trailhead (hopefully you stashed some cold beer, flip flops, and a clean t-shirt).

Water: there are opportunities to refill water at melting snowpatches along the Crossover Pass descent depending on the conditions each year. Once finished the rappels you cross full alpine streams with good flow.

Note: you can bail from the route by rappelling but be prepared to leave gear and slings. The route is void of tat with the exception of a few anchors down low. Climbers have self-rescued in bad weather but they all have the same story of leaving half their rack.

The Chilliwack River Valley is 2 hours east of Vancouver on Highway 1 (Trans Canada Highway). Take exit 119 onto Vedder Rd. and go through Sardis/Chilliwack. After about 4.5kms the road comes to a roundabout. Go 1/4 way around the roundabout exiting right for Chilliwack River Rd. Drive 30kms down this road (paved) to the Nesakwatch Creek Forest Service Rd. (gravel) on your right. The turn is just past Riverside Campground (signed) and has signs for the Slesse Memorial Trail. Turn right on the Nesakwatch FSR, cross 2 bridges a short ways in to a t-intersection. Turn right here and continue 7kms up the Nesakwatch FSR to the Mt Slesse Memorial Trailhead Parking. The Nesakwatch FSR condition varies from year-to-year from rough high clearance 4x4 to easy 4x4 or all-wheel drive. Check posts on the South Coast Alpine Facebook page for up-to-date conditions each year.

The Slesse Memorial Trail provides access to climbing routes on the east side of the mountain and leads you directly to the propeller cairn. Its an easy trail to follow with a new'ish bridge over the Nesakwatch river and follows an old logging road for about 1/2 the distance. You'll pass the junction with the Crossover Pass descent trail and then shortly after (~200m) arrive at the Slesse Memorial plaque with excellent views of the route. The hike takes approximately 3 hours from the trailhead to the propeller cairn then up to another 1 hour to reach the start of the bypass ledge.

Continue across easy rock slabs, northward, aiming for a wooded ridge separating you from the bypass glacier cirque. You'll drop down the slabs a short ways as you come up against the wooded ridge. Sticky approach shoes are recommended as the slabs become 3rd to 4th class depending on route finding. Find the fairly obvious gully accessing a notch in the ridge. Once at the top you'll clearly see the route ahead to the start of the bypass ledge.

Note: Steph Abegg's website has a plethora of information detailing this climb.

Depending on your technical climbing ability and your comfort level (5.13 vs 5.10) you might be fine with a single rack to 3" (plus a few doubles) and a single skinny 60m rope. Alternatively, take 60m 1/2 ropes or twins and carry a double rack to 3". Pepper your rack with 3-4 quickdraws and 3-4 alpine draws and you are ready. The preferred footwear is sticky approach shoes to handle the technical scrambling and slabs but go with your experience. If the route and descent is mostly dry you can get away with very little else except maybe lightweight bivi gear. If your investigations report snow patches that are of concern then you might want microspikes or aluminum crampons and an axe (nut tool can double in a pinch).

Note: you can get cell service from the summit and from sections along the Crossover Pass descent (depending on your provider) for emergencies and updating social media. 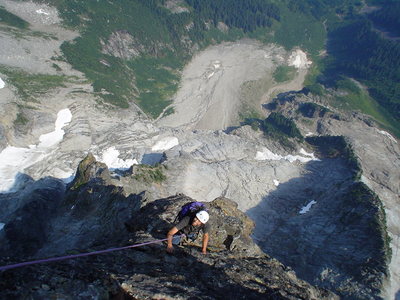 Flex romping up the upper buttress photo by Je… 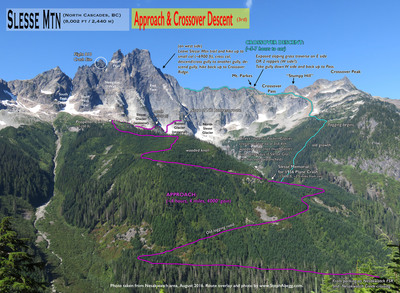 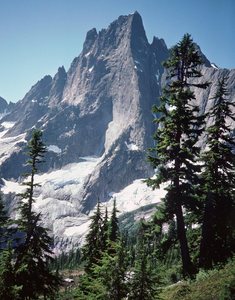 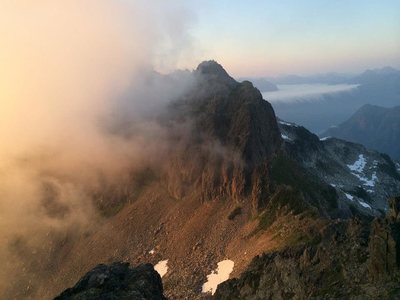 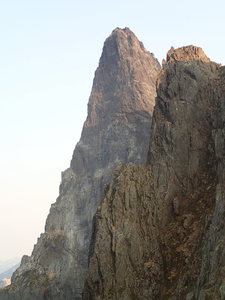 North ridge of slesse looking south from the cr… 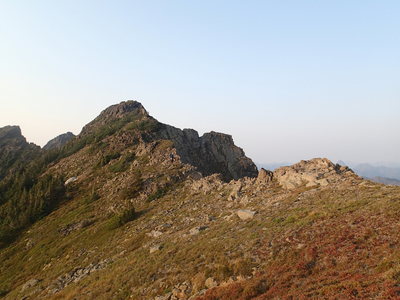 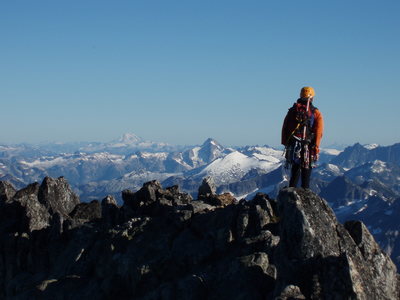 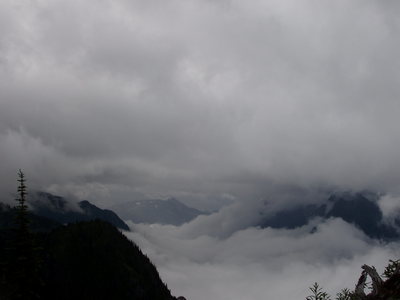 The next day, morning at the forested knoll on… 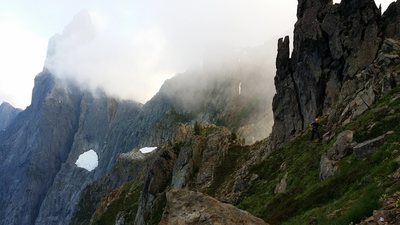 On the Crossover Pass descent. 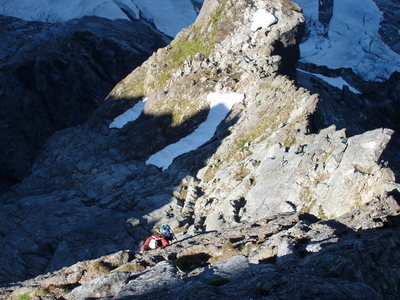 Looking back down to the bivouac ledge. 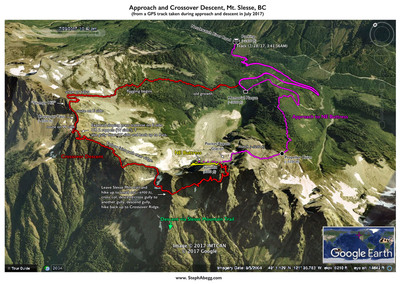 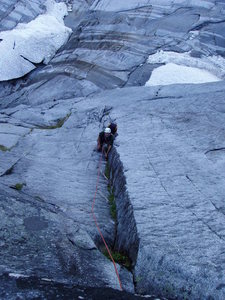