El Sendero Luminoso (The Shining Path) is one of the most famous and coveted climbs in Potrero Chico - and deservedly so. Visible from miles away as one looks southwest towards Potrero Chico, it is a stunning, sinewy line of clean rock that winds its way from the ground to the top of a prominent pinnacle directly beneath the true summit of El Toro in 15 wonderful pitches. Considering how much vertical terrain it covers, the fact that it not only has very little vegetation or loose rock, but also such sustained and high-quality climbing makes it a truly world-class route. This is the area's king line (with Time for Livin', perhaps, being the queen line). The route was originally rated 5.12d but many feel this is a very inflated grade. My understanding is that it tends to reward the technically proficient climber and to deal out some punishment to those who aren't dialed with their footwork (in fact a common complaint/excuse cited for bailing is foot pain - I recommend stiff shoes). I'm going to assign my personal opinions on pitch grades - take them with a grain of salt but at least they aren't as sandbagged as Alex Honnold's. Sendero is also, in my opinion, bolted in such a fashion that you will often be forced to do difficult climbing well above bolts. The potential for legitimate falls throughout the climb is real. I don't know much about the history of how it was established, but surely it was bolted on rappel as I frequently found myself critical of the locations of bolts and belays (or lack thereof)... Expect a certain "bold" feel despite it being reasonably safe.

Some other considerations: During prime season, the wall receives zero sun so it can often be climbed comfortably in warmer conditions with minimal water. On the other hand, in cold or inclement weather conditions can be pretty unpleasant with a constant up-draft of cold, damp air. The approach takes about 25 minutes. The climbing is divided neatly into two halves by a bivy ledge (La Quinta Santa Graciela) which can sleep up to four in relative comfort (bring WAG bags and don't even think about leaving human waste on this ledge). Five long pitches - the most difficult of the route - lead to this ledge, and then another ten - shorter, with more brief cruxes - continue from the ledge to the top. The upper pitches can be rapped with a single 70m rope whereas the lower five require two ropes or an 80m rope and some shenanigans. A common and logical strategy is to climb with a lead line and a tag, hauling a light pack, to the bivy ledge and then leave the bag and tag there while blasting the upper half. There are many uncomfortable hanging belays - a belay seat and/or your approach shoes would be luxuries.

Editor's Note: This page has been on MP for over 12 years with very little/inaccurate beta, so I've adopted it to provide better info. Please forgive me if your comments have been incorporated, edited, or deleted and accept my gratitude for the beta they provided.

P1 (5.12a, 140’, 14x bolts): One of the longest and hardest pitches on the route. Easy 5.11 climbing for the first half, then hard and insecure climbing up fingercracks and sidepulls for the second half. Hanging belay.

P2 (5.12c, 115’, 14x bolts): The crux. Again easier 5.11 climbing for the first half with a few good rests to a crux followed by sustained climbing trending left on fingerlocks and sidepulls. Hanging belay.

P3 (5.12a, 100’, 9x bolts): Easier than the first and second pitches but still hard. Intricate face climbing up crimps and sidepulls. Stance belay.

From here, there are still a lot of hard pitches but they are shorter and generally have more brief cruxes than the previous pitches. Put another way, this is basically the halfway point in terms of effort.

P7 (5.11c, 70’, 9x bolts): Drop down and traverse left then back up (scary - if the bolt off the belay on this pitch is replaced it should be moved up and left a couple meters - it would still be easy to clip from the belay and would make this section much safer). There are a few good stances before busting a boulder problem traversing right, across a bulge, to a crack which is liebacked to the anchor. Poor stance belay. Hint: If you do it the way Honnold does it this pitch is 5.12, but there's a trick that makes this pitch much easier!

The next two pitches ascend a beautiful grey slab dubbed "Homero's Finger". Link them to avoid a hanging belay, but prepare for battle.

P8 (5.12a, 110’, 9x bolts): Climb some slightly steeper blocky rock (awesome and a taste of things to come) to a small roof. The crux is establishing over this roof - you can go left, right, or straight up. Climb a sustained thin face on immaculate rock. Poor stance belay.

P9 (5.11b, 100’, 7x bolts): A hard move off the belay leads to incredible thin face climbing on perfect rock. Link with previous (P8) to avoid a hanging belay or next (P10) which is short and easy. Good ledge belay.

The route moves out left here to climb wildly exposed, beautiful red rock that is slightly different in character from all the climbing below but just as excellent.

P11 (5.11c, 100’, 12x bolts): The Kung Fu Farm: Work out left (consider long draws or back cleaning) and then up a cool feature with blocky sidepulls to a roof. Pull the roof on decent holds. Stance belay. Remember you don’t rap to this anchor: Scope out the rap anchor on the wall out right while here.

P12 (5.12b, 90’, 10x bolts): El Naranjo: Sustained, insecure climbing with slopey feet and weird sidepulls on red lichen and dark gray rock. Beautiful climbing that gets the grade because of how relentless it is. Climb to the roof (crux) then do two traverse boulder problems working right towards a crack. Good stance belay.

Front and center on the north face of El Toro. Park in the large gravel lot just before entering the park. Wander down a short gravel road towards some fenced in private property and skirt around the far left corner of the fence. Do not head straight up here (towards Satori) but drop down a few steps and pick up a trail heading west. Take the second left which heads up a steep, narrow wash directly towards the wall. A few fixed lines or easy scrambles will lead to the start.

I took some time to record the status of fixed hardware (as of January 2020) so as to help with future replacement efforts. Generally speaking, the first five pitches have been fully replaced with a few exceptions. On the first half most anchors have been replaced with glue-ins, however lowering hardware (quicklinks/rings) should be added as presently your only option is to thread the bolts directly which will eventually wear them out. The upper ten pitches have aging bolts that will need replacement (mostly 3/8" plated steel 5-piece bolts with stainless hangers). Here's a specific breakdown: 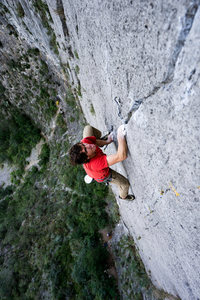 Incredible think crack moves near the top of Pi… 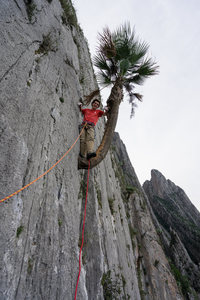 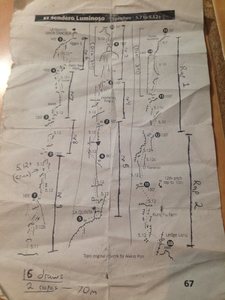 Older topo given to us by Magic Ed, with some e… 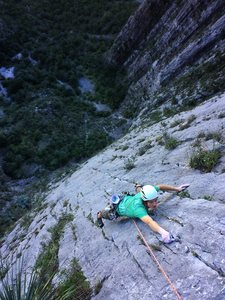 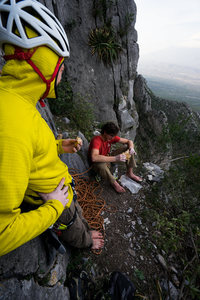 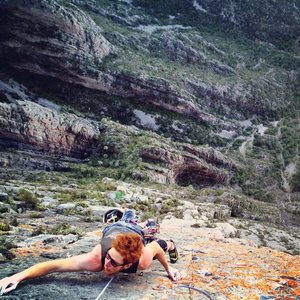 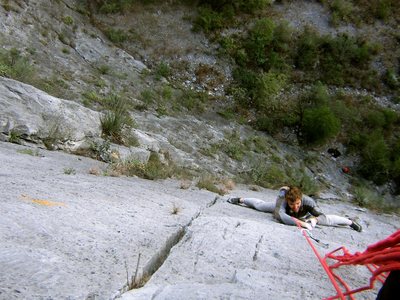 Cody on the first pitch. For more information… 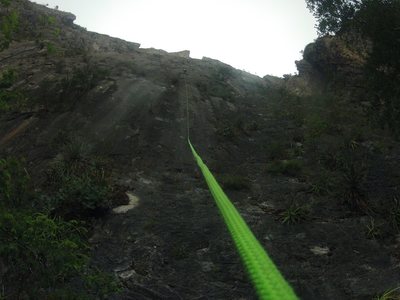 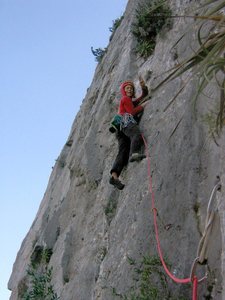