This is a fun, inviting pitch with a grungier direct finish or more interesting variation finish to the right. We stumbled upon this after climbing Ashley's Roof on an explore day. Communicating with Kent Lugbill and Greg Hand, we were perhaps the 2nd group on the face.

Ascend a fun slab to a triangular stance. Continue up with natural pro opportunities that seem to just appear almost whenever you think you want it. At ~70' up, there is a comfy ledge. You can continue straight up (scruffy with a 5.7 move near the top) or traverse right ~20 feet (stay low to avoid a loose block), and then move out onto a fun, bulbous face to a tree on a big ledge.

Scramble off down and right into a gully and back to the base. You can apparently continue above to another pitch or two.

This is down and left from the 3 bunches pitches of Lost Rock. It is only perhaps 100 feet from the river and probably only 20' above water level.

Wires to a #2 Camalot. Tiny cams are useful. Doubles of #0.75 Camalot size may be handy. 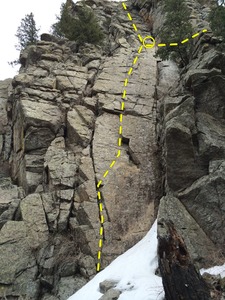 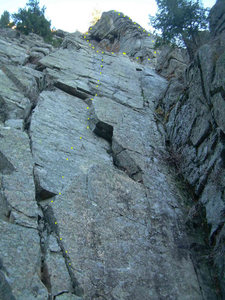