Although much of Red Rocks climbing is indistinguishable and unmemorable, every once in awhile I chance upon a gem of unprecedented quality. Drifting is one such route, and given that it is relatively new, it proves that Red Rocks still has much untapped potential. The route is largely up perfect rock, has a lot of variety, and a few outrageous sections. Bolted right where it needs to be, this route has demanding climbing both mentally and physically, and is thoroughly enjoyable.

Begin on the large, open face just right of the main Jet Stream Wall at a pine tree growing near the base of the route. Scramble up a right-leaning ramp past an obvious bush to a bolted belay atop a flake and below a small roof.

P1: Pull the roof to a stance, and perform a difficult, inobvious sequence up incredible features to a stance below a bulge. Climb out right under this to a bolted anchor. 8 bolts, 80', 5.11c.

P2: Step left off the anchor to a tips lieback and punch it up to a bolt (small RP protects run to the first bolt). Three more bolts leads to a stance and a traverse left to gain a hidden seam. Ascend the seam 10' to bomber gear (this whole bit is run out). Continue up the seam with good gear to an overlap, then traverse left on fragile holds to a bolt. A pair of small wires protect this 25' stretch of climbing. A couple thin moves left past the bolt to reach an easy flake with poor gear that leads to a bolted anchor on the ledge. Bring the full rack, runner things well. 150', 5.11c.

P3: Climb easy rock up off the belay to a stance on a ledge at the base of a leaning, left-facing corner. Clip a bolt, step up off the ledge and climb the arete (makes up the right side of the corner) on thin, difficult holds past a few more bolts. At the top of the corner, step left and follow a hand crack up to a belay in a loose alcove below the huge roofs. 100', 5.11b.

P4: Step around right and tip toe up the wedged flakes to a steep, left-leaning, left-facing corner. Use long draws on the gear in this, then step wildly out of the corner to the right and clip a bolt. Pull the roof above on a jug and edge up the steep face to a reasonably comfortable semi-hanging belay. Exposed and crazy! 100', 5.11a.

P5: Step left off the belay and climb the flawless varnished face past six bolts to a bolted anchor. 100', 5.11c.

The route can be rapped with a single 70m rope, but be very careful!

Rap 2: Down over the roof and into the alcove. This one is very close and you have to keep swinging in order to prevent getting stranded in space. Also, this rap requires a difficult pendulum to reach the anchors. Use an autoblock for this rap and tie knots in the ends! Also, bring quicklinks for this anchor as it is the only one without rings and twists the ropes annoyingly (really, a separate rap station directly under the rope line would be nice here).

Rap 4: Straight down the the face to a dedicated rap station that is invisible from above. Very close; consider tying knots.

Rap 5: No big deal down to terra firma.

A dozen draws and slings, a single set of cams from purple TCU to #3 Camalot. Wires, RP's. A 70 meter rope. 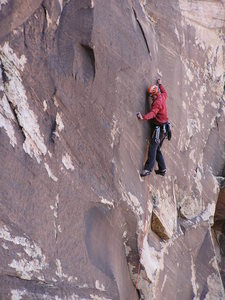 Josh is setting up for the crux on P1. On a co… 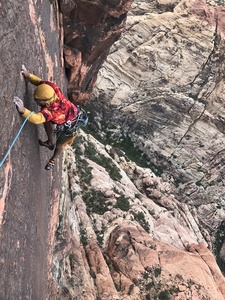 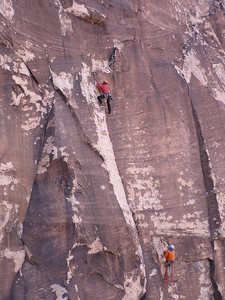 Josh is at the end of the powerful 5.11c sectio… 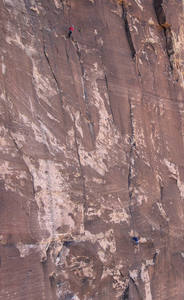 Adrift on the long second pitch 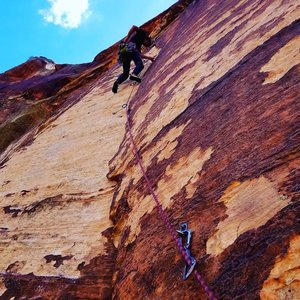 Skylar C. on the incredible start of p2 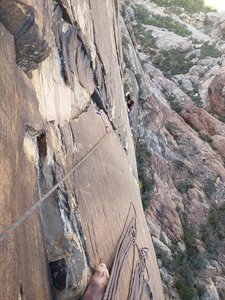 Pitch 2 is pretty much all time 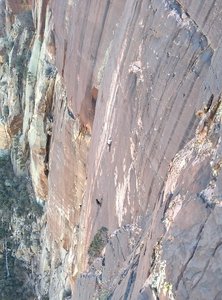 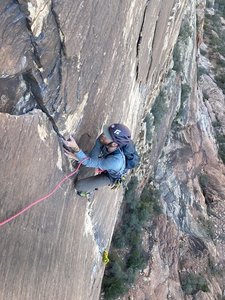 Cam at the end of pitch 2 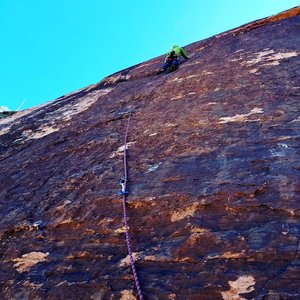 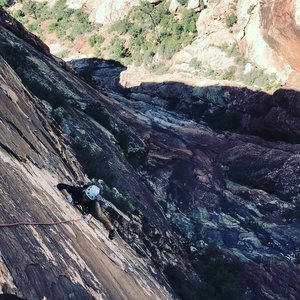 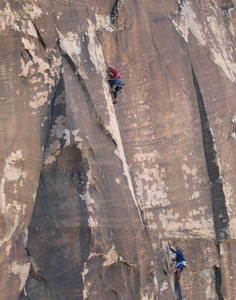 Near the top of the tips layback on P2