Mount Baker's Coleman Glacier route is my favorite ski mountaineering route. The approach trail through the forest is a cut above the other volcano's flora and the views of big ice are even more blue than Rainier. Most of the skiing is cruiser, but the crest of the Roman Wall is a serious place for turns.

Follow the trail to the bivy sites, that's were the snow climbing starts. We kicked steps up the initial snow for close to 1,000 feet before the snow leveled out enough for skins. These initial slopes were about 25 to 30 degrees and a blast on the way down.

Traverse under the Black Buttes, eventually aiming for the saddle between the Buttes and Baker. See Panorama photo, red line. This long easy glacier was mostly smooth and fast to ski, except for the short bit of icefall debris.

There is serac avalanche danger! Zoom in on the Serac Hazard Photo. The packed trail crossed major slide debris under a huge ice-fall lurking just up from the Black Buttes.

After grunting ASAP past the hazard area, a few large crevasses are threaded before reaching the saddle.

From the saddle, the dry skree of the pumice ridge must be endured up to the base of the Roman Wall. After skiing the Roman wall, we also carried our skis down the pumice ridge. Too many crevasses on the Demming side of the ridge for safe skiing and way too steep and crevassed on the Coleman side.

The Roman Wall is a ramp of snow between towers of rock that is climbed from the top of the pumice ridge up to the summit flats. It is 30 to 35 degrees and known to slide and cause trouble.

Once the Roman Wall has been climbed, it is a long flat skin east across the summit plateau to the true summit. The real skiing doesn't start until after recrossing the summit flats, back to the top of the Roman Wall.

Late in the day we found 6" inches of slush over the slippery wet ice of the Roman Wall. The first turn past the summit mini-schrund set of a point release that slithered a good 1,000 feet down the Demming side of the pumice ridge. Eventually it all slurped into a crevasse, leaving behind a choice; either ski the newly exposed ice or cut loose more slides skiing the smoother slush. I think we went with the slush it only slid a little more. After walking down the skree to the saddle, the Coleman Glacier to the bivouac skis very fast.

By comparison, this mountain is much easier than either Rainer or Hood to ski. The Roman Wall is a tiny bit more intense than the first turns off the piker's summit of Mount Adams.

The first descent party was found in Lou Dawson's book, Wild Snow. I'm not sure which route they did. The main thing is they bagged this mountain.

Drive Hwy 542 to the small town of Glacier and pony up for a parking permit at the ranger station. A couple klicks further up hwy 542, turn right on the forest road 39. The access road begins as pothole infested pavement on the east side of Glacier Creek. After a bridge, the dirt road switchbacks up to the Coleman Glacier trailhead.

It would be nice to be able to camp at the trailhead, about 3,000 feet above sea level, but there are no official sites. The bush is often yucky-wet for tenting. A van or camper might be best.

We stayed at the motel in Glacier. Even after waiting out several days of bad weather at Glacier's disappointingly low altitude, we were still able to daytrip the peak. All the other parties we saw on Mount Baker bivouaced at timberline.

The trail up to treeline gains 2,000 feet through excellent old forest. The trail has a tough creek crossing close to the parking. We used extra running shoes to wade across in the 2am dark.

We carried self arrest ski poles and one axe each. No crampons, just AT boots, Ramer bindings (free heel on descents) and Ramer skis. We roped up for the ascent with a short 8mm, prusiks, and sport harnesses. The crevasses were not hard to avoid.

We wore only a Poly-pro shirt, windstopper jacket, and windstopper pants. No Gortex or other heavy clothes except for the Black Diamond I-tent which we carried as ski injury insurance. 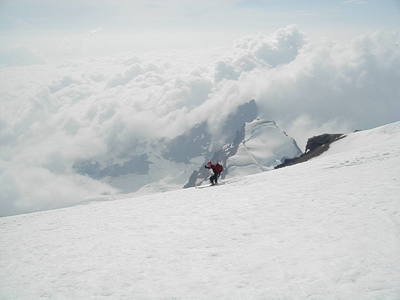 Starting the descent of the Roman Wall. Pho… 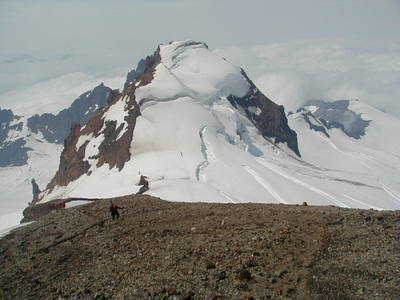 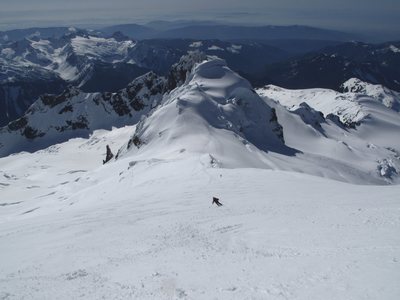 Goran, finishing up the Roman Wall and heading… 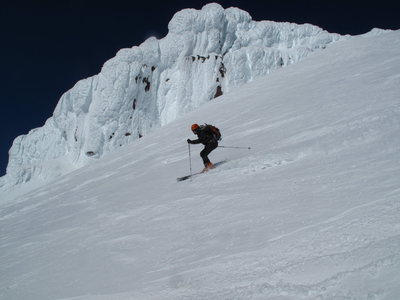 Goran, starting down the Roman Wall 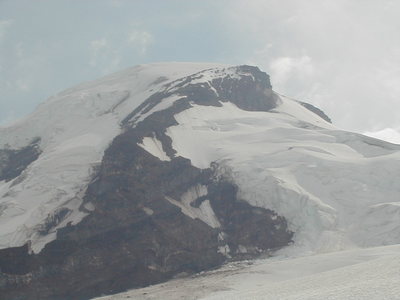 The climber trail on the Roman Wall is visible.

Coleman Glacier from trail to Bivvy. Photo b… 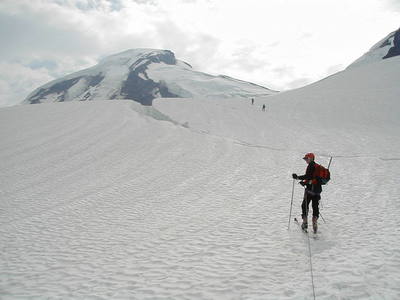 Below the Black Buttes on skins. The party abo… 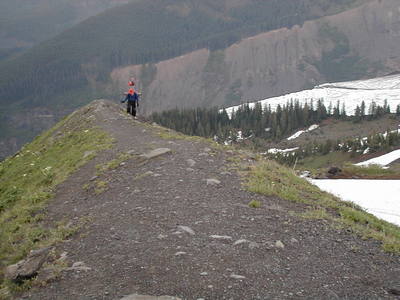 Getting close to the popular bivouac site at da… 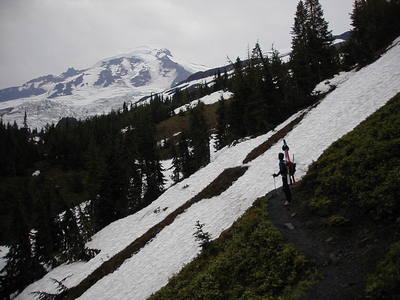 Dawn at the point where skiable snow met the of…

Panorama of Mount Baker's north side. The red…