From the notch above the Stuart Glacier, 11(ish, depends on how you do it) pitches of low/mid 5th class with one move of 5.7 will take you to the base of the Gendarme. This involves a lot of fun, exposed, easy climbing on bomber rock. Despite this, the best pitches are on the Gendarme. Above the base of the pillar, are two crux 5.9 pitches. The first one is a steep fingers and hands dihedral with good rests between harder sections of climbing. From here, traverse to the offwidth and grunt up it. After this, there's one more pitch of 5.8-5.9 before the final three pitches of low 5th.

This route is amazing. A must do for anyone comfortable on alpine rock of the grade. When we did it, we approached via Ingalls Lake and Goat Pass, this wasn't too bad but meant we had to descend Cascadian Coulior which was one of the worst climbing experiences me and my partner had ever had.

There are multiple approach options for this route. Both have their pros and cons. You can approach from the south via Longs Pass TH or from the north via Mountaineer Creek. I recommend you buy a topographic map and figure it out for yourself.

When we did it, we approached via LPTH. From LPTH, head up to Ingalls Lake, traverse ledges around the east side of the lake and follow the trail to Stuart Pass. From here, descend northwest on talus, traverse, and then ascend more talus to the pass between Pt. 7893 on Jack Ridge and Stuart's West Ridge (aka Goat Pass) there are potential bivy sites here. Finally, traverse the Stuart Glacier to the 4th class gully leading to the prominent notch in the North Ridge. There are two good bivy sites here and many more mediocre ones. This is the beginning of the upper ridge.

If you approach from the South and wish to descend that way as well, (LPTH) to descend from the summit, head down and east towards the false summit via blocky 3rd and 4th on the south side of the summit. Once at the summit, follow cairns and a ledge system east to the western edge of a large snowfield. This is the top of the Cascadian Coulior. Without crossing the snowfield, follow it down into blocky, loose 3rd class terrain that will go on forever. Descend the coulior for a very very very long time occasionally venturing to the hillside on the side of the gully. This will take you down to Ingalls Creek.

Pretty subjective. People do it with no gear, people do it with lots of gear. Bring whatever you normally bring on a long alpine rock route plus 1 3.5" piece for the offwidth. (more if you want the security of stitching up a short 5.9 offwidth) 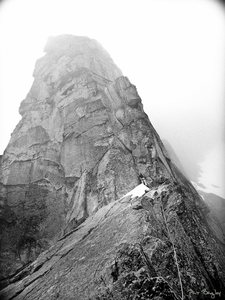 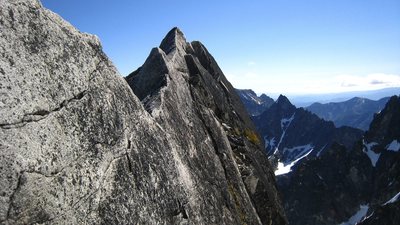 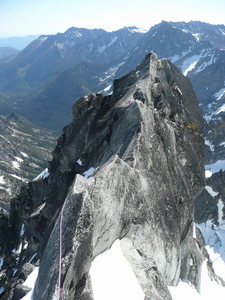 Justus on the knife-edge section of the ridge. 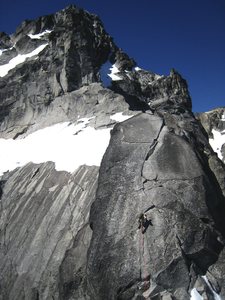 The 'slab with crack' pitch below the Great Gen… 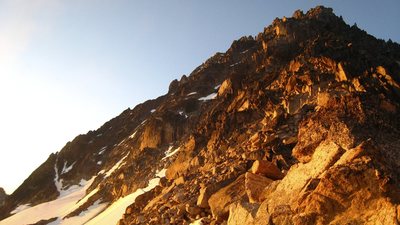 The view of the Upper North Ridge from near Goa… 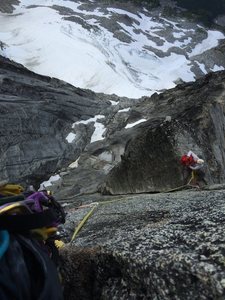 After the offwidth at a rest above the fixed 4.… 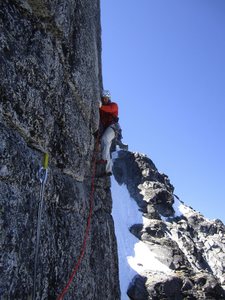 Beginning the wide crack crux on the gendarme.… 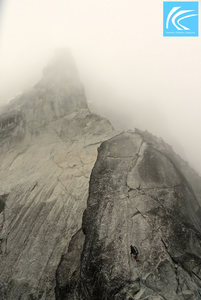 Beneath the slab pitch and the Great Gendarme a… 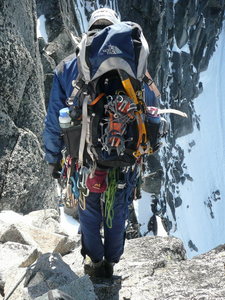 A typical rack for a June(uary) ascent.. 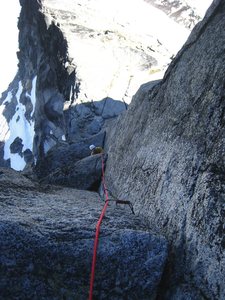 Looking down the 1st 5.9 gendarme pitch 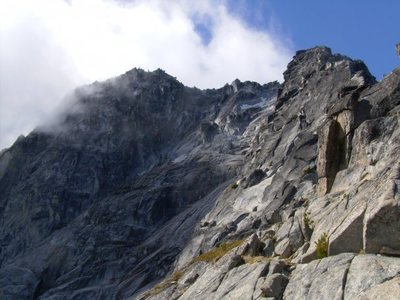 Midway through the route 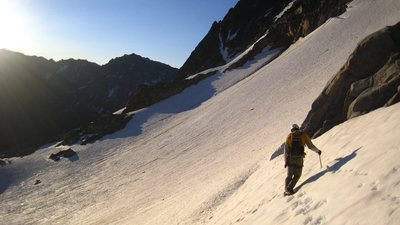