A quarter mile past Lake Como a cairn marks a path south up a steep rocky couloir to the ridge crest. This couloir is rather unpleasant and loose and ends at a saddle at 12,580'. From here, either head up the ridge (east) or cross the saddle and immediately turn east, contouring across the south face, following a cairned traverse.

The first option puts you on top of pt. 12,980'. Drop down to the next saddle and then pick up a cairned route which traverses across and up the south and then southwest face to the base of the Hourglass Couloir, which lies on the SW face of Little Bear. The second option leads to the same place without going over the top of pt. 12,980'.

You are now ready to enter the Hourglass. Beware! It would be difficult to design a more dangerous route from the perspective of rockfall. Any rock which is knocked off the upper 500' of the route is channeled straight through the Hourglass, which is only about 10' wide at the narrowest point. Thus, climbing this couloir with another party above you is akin to playing Russian Roulette. I would heed Lou Dawson's advice and plan to climb this monster on a week day. You can start early and try to beat everyone else, but you may still have to deal with them on the way down (which is a good reason to do the traverse).

The bottom of the Hourglass is a smooth slab and comprises the crux of the route. Avoid grabbing the fixed ropes or you will have to record your ascent as 4th class, A0 (just kidding, you can do whatever you like). This section is not difficult when dry. Unfortunately snow, ice, and water tend to linger here. At the neck of the Hourglass, look for numerous scars in the rock where high speed boulders have impacted. There is nobody above, right?

Soon after passing through the neck of the Hourglass you reach a big ledge with the anchoring for the fixed ropes (was the rappel anchor). From here on the climbing is only 3rd class, however extreme caution is required to avoid knocking rocks on people below you. At this point, you can climb up and right, or left and then more or less straight up. We chose the latter option which heads directly to the summit after about 400 vertical feet.

Despite all the warnings, I found this to be an enjoyable route -- since there was nobody above us. It may be the best route on the mountain if you are lucky enough to find it unoccupied.

Helmets! As of 2007, there are two fixed ropes on the 4th class crux. I gather from earlier trip reports that these fixed ropes are a recent addition. On one hand they make an ascent more convenient because you no longer need to take a rope (for getting down, at least). But they may also make the route more popular which is a very bad thing on this route.

Since the Hourglass faces mostly west, snow and water tend to linger in it. It is quite common to encounter verglas here, and September snowstorms can increase the difficulty substantially. If there is enough snow or ice, the fixed ropes will be buried! 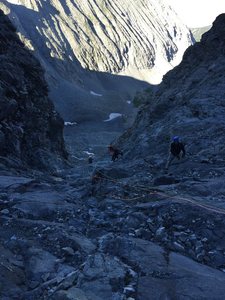 Above The Hourglass, navigating the loose slope… 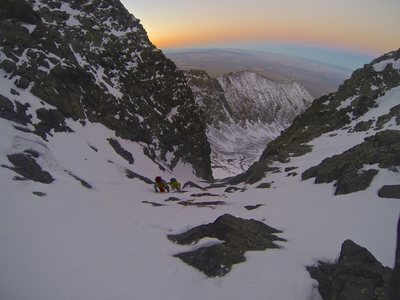 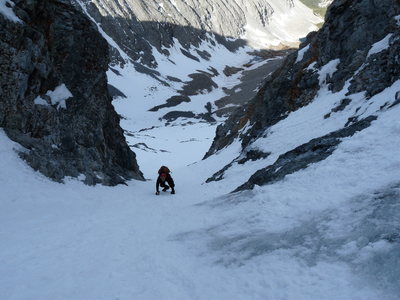 If you can, climb this route in spring/summer w… 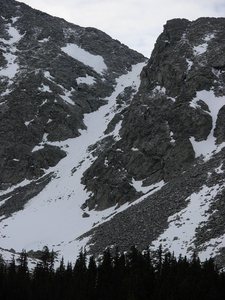 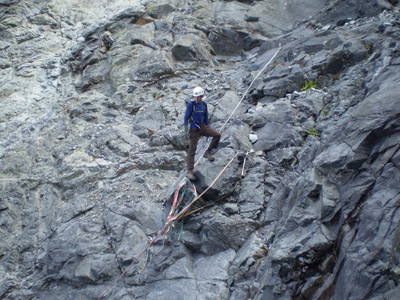 The messy anchor above the hourglass. Septembe… 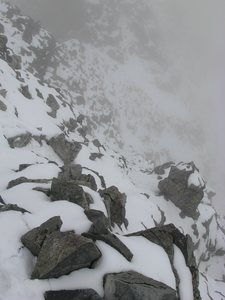 Area above the fixed lines in snow. 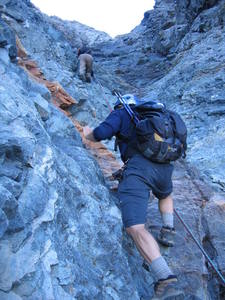 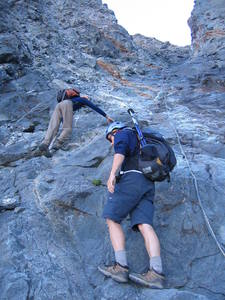 Kurt and Martin enter the crux Hourglass, with… 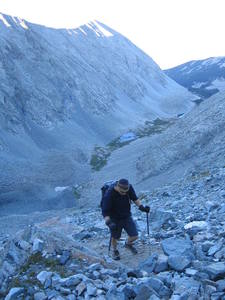 Kurt Mensch on the long rising traverse to the…