Generally, people do the traverse from South to North. This is because the crest slopes upwards in that direction and therefore you will end up at a higher elevation. Doing it North to South would involve more downclimbing.

Probably best to Simul or Solo much of the route. To rope up for every single pitch would take a horrendous amount of time.

Start the climb at the South face above a patch of pine trees and stay a bit left. The climbing is <5.6 here and climbs very textured / featured rock upwards onto the ridge. Follow the path of least resistance. Once on the crest itself, just follow it along. When in doubt, check out both sides of the crest and traverse along the easier one. The crux of the climb comes on the left side (West) of the crest directly below the South Summit. Strenuous and physical climbing up a good crack leads to easier climbing and then the summit. Sign the register.

From the South Summit: Do not rap, but rather climb back down the ridgetop for 100' and traverse past on easy ledges on the East side of the South Summit. Trying to rap often results in snagged ropes here.
OR
Simply continue the traverse and downclimb the next section, placing pro for the follower.

Down into the notch between the two summits, then some 5.7 moves to get up onto the (higher) North summit.

Some parties stop at the notch between the two summits and rappel down the very wide gully on the west side of the notch, straightforward with a single 60-meter rope. There are rock horns along the south side (descender's left). Might be slings/cord already in place, but safer to bring your own webbing/cord material and rappel rings.

From the North Summit: Many parties stop here and rappel off the crest. Two double-rope rappels on the West side is easiest, but many parties have done it by three or four rappels with a single 60-meter rope -- see Comments on the route North Ridge of Matthes Crest).

Some of the rappels are on natural anchors, so bring some webbing/sling/cord (and rappel rings) in case the stations need new webbing.

Continuing the climb offers great climbing, but the climbing difficulty increases so it is recommended you be solid at the grade. I'd say some of the downclimbing was 5.8.

Retreat:
It is probably best to bail off the West side at just about any point. There appear to be many rap stations at random intervals on the face. Multiple short rappels are best. Be prepared to leave slings and or gear.

Start at the extreme south end right above a patch of pine trees. Climb the face to the ridge then continue either to the North Summit or the end. 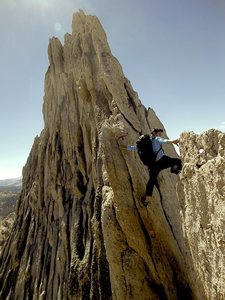 Michelle on the step across (photo by Daniel) 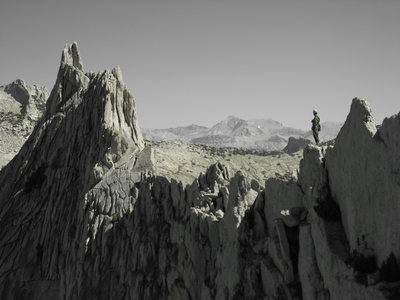 Soon after gaining the Crest 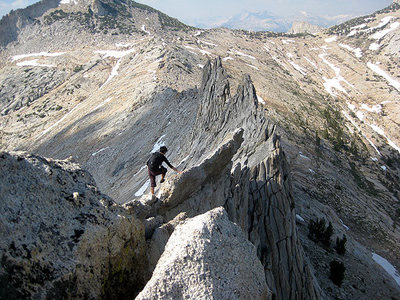 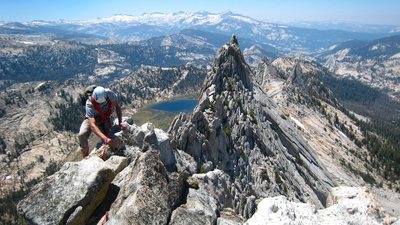 Nearing the South summit on the Mathes Crest tr… 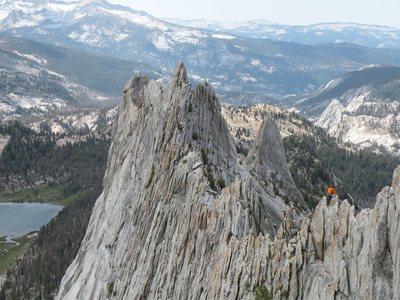 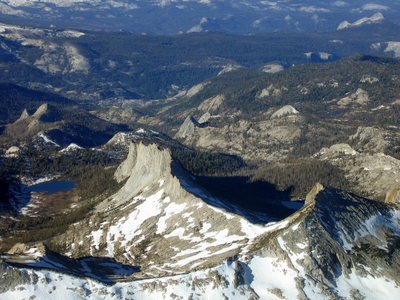 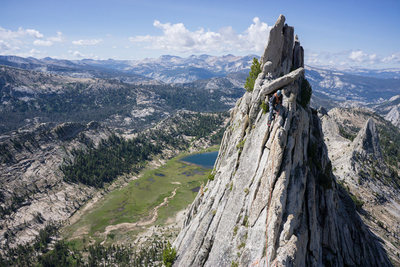 Pablo on fun part of a ridge 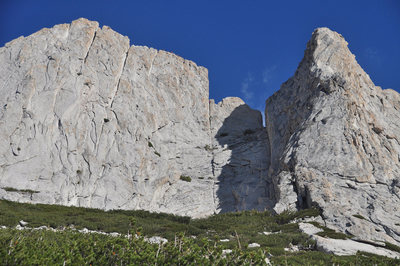 Climbers on the north tower. 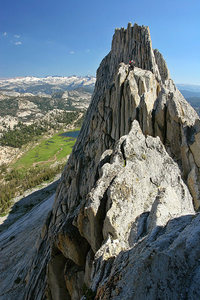 Looking back at the North summit from the 2nd h… 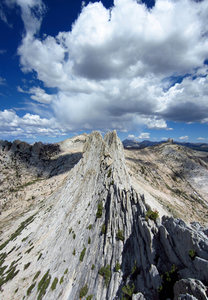