'Till Broad Daylight is a five pitch route that ascends a line at the far right edge of The Great Arch feature on Three O'Clock Rock's south buttress. All the old rusty buttonheads have been replaced.

The first two pitches of "Till Broad Daylight"(established as two pitches with an anchor at midpoint, but often done as just one pitch) offer an excellent introduction to Darrington rock. With only a single 60 meter rope, you can rappel these initial pitches, but for more knobby face climbing, continue on.

Pitch three climbs up a corner and heads left across a short slab to a set of anchors. Pitch 4 starts by stepping left and climbing up and over a small overlap, and trending left to a bolted belay. Pitches three and four can be easily combined into one moderate length pitch.

Pitch five climbs straight up on steep knobs to join "The Kone," which trends up and left to a chain belay. Note that the first ascent party on 'Till Broad Daylight avoided intersecting The Kone route and instead followed a line of old bolts heading left just before the point where most climbers join The Kone.

DESCENT: Two ropes are required to rappel, following the line of a route called Tidbits. This will place you on the ground about 200 yards south of where you began. An alternative is to rappel with a 70m line by abseiling the Gastroblast route. A 60m rope will come up short to reach the top of the first pitch on Gastroblast by about 10-15 feet. 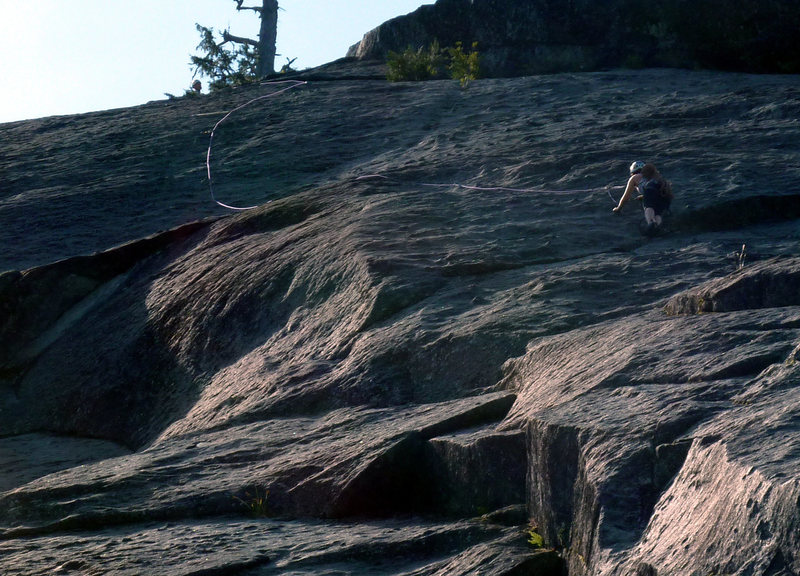 This outstanding pitch has great exposure and wild knobs.

To reach Three O'Clock Rock, drive five miles up the Clear Creek logging road (Forest Service 2060) which departs the Mountain Loop Highway three miles southeast of Darrington and directly across from Clear Creek Campground. Stay to the right where the road forks and about a mile further reach the Eightmile Creek trailhead. Park appropriately and don't block the road, there is a trail sign/bulletin board and backcountry registration at the trailhead.

Hike the Eightmile Creek trail uphill through second growth and then tall timber, to where it exits the trees and crosses an old overgrown talus slope about 30 minutes from the car. A climbers trail leaves the hiking trail partway across this open area, about 100 feet before the trail reaches the rock slabs of the North Buttress of Three O'Clock Rock. Head up through vine maple, bearing left at and in a couple hundred yards the trail meets the South Buttress of Three O'Clock Rock.

'Till Broad Daylight starts on a bushy bench, twenty feet up and at the right side below the Great Arch. Scramble up and right from the base of the Arch, or head back along the access trail and scramble up and left to reach the same point (slightly friendlier).

The Cornucopia Flake is an obvious left facing corner rising from the right end of this bench. This is an excellent, though somewhat run out 5.9 route with a fun 5.5 first pitch (chains, 40m, a good top-rope). There are three or four bolted routes beneath the Great Arch that offer good knob climbing with the one on the right being the easiest (5.7).

Bring a light rack to 1 1/2" and a dozen runners and draws (the route zig zags enough that you'll want several longer runners along with standard quick draws). 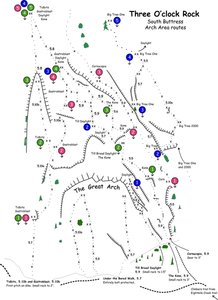 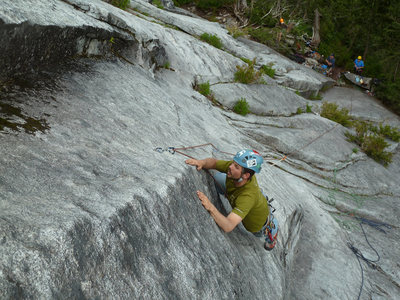 Daniel Coltrane on 'till Broad Daylight. 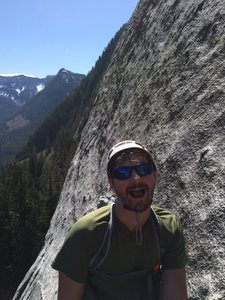 Travis was clearly excited about the steeper se… 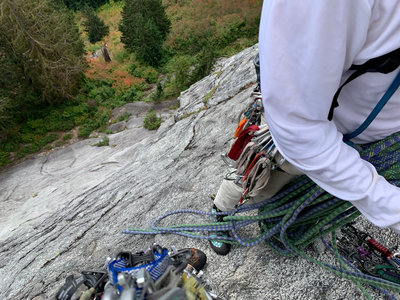 Looking down from over the top of the Great Arc… 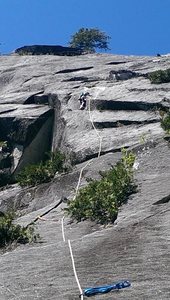 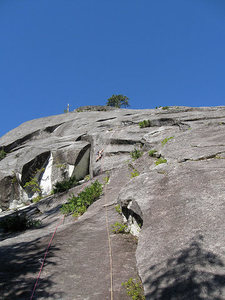 1st pitch of Till Broad Daylight.

More About Till Broad Daylight