Depending on your level of comfort, you can scramble fairy high up the skirts of the west face, but it likely wont change the location of Pitch 1 belay.

P1 (150 ft): Looking up, locate an obvious buttress in lower part of the face. Pitch 1 belay will be on top of it. Notice a horizontal shelf going left from the foot of the buttress. Head up the slabby terrain toward the left end of this shelf, climb up onto it, and traverse right to the base of the buttress. (Do not get seduced by the corner on the left. Its about 5.10 and not protectable higher up.) Once all the way to the right, climb up into the left-facing corner and follow it. When there is an opening to the right on a steep and fractured rock, take it to a comfortable ledge. There should be a rap sling around one of the boulders, but a better anchor is in a crack which takes 0.4 to 0.5 cams.

P2 (100 ft): Looking up and to the left, you will see three green, lichen-covered, boulder-like projections one above the other. The route goes to the right of the first one, left of the second, and right of the third. The crux of the pitch is the slab below the first "boulder." To avoid stuck ropes, protecting is best done on the outside of the first boulder rather than in the corner to the right of it. Once past the third boulder, you should see a tree to your right.

P3 (170 ft): Go up the easy draw above you, left along a pair of parallel cracks/seams, right along a thin crack. The rest of the pitch heads left, mostly up easy slabs, all the way to where the head wall reaches the north face of Middle Rabbit Ear with the impressive Church Key clearly visible. You have arrived when you see a chest-high piton testifying that you are indeed on the old route.

P4 (80 ft): Start up the ridge line. After about 20 feet you encounter another piton. With your feet just barely above it, start to traverse right for a very short distance until you encounter a bulge on the outside of the crack you are following. Step up onto the bulge. (This awkward move is the crux of the route.) Directly above you will see a well-defined corner with some small bushes inside it. Go up the corner to its end, then exist up its steep right wall. Cross the gully you find yourself in and continue right to a good ledge.

P5 (90 ft:) Step up onto the slab on the right. Go up past another comfy ledge then sharply left all the way to a short, steep, right-facing corner. Go up the corner (takes #3) and then a bit right to a nice and shady belay spot.

P6 (80 ft): Traverse right on a trivial ledge. (Protect it anyway, to avoid having ropes stuck below it.) When you can, head up the slab to a third class terrain.

As you go up Rabbit Ears Canyon, eventually there will be a lesser gully that branches off to the left leading up towards the lowest rock on Middle Rabbit Ear. Follow an indistinct trail which goes up this gully or climbs next to it on its south side. Once on rocky terrain, head one gully over to the left an you'll be at the base of the West Face of the Middle Rabbit Ear.

A double rack, especially in small cams, with plenty of long runners to reduce rope drag. Aside from the two pitons, no fixed gear/anchors are found on this route.

There is a rap line down past Church Key. It starts with a sling on a tree near the summit. A single 70m rope will reach the Church Key Saddle. Scramble down the steep, west-side gully and down a hole to a ledge with a two-bolt rap anchor. Two rope rap (60m ropes okay) will reach a similar ledge with another anchor. A second two-rope rap will reach ground. Both rappels have a tendency to twist ropes on pull.

From the bottom of rappel, head UP east over a small saddle. Scramble down into the gully between Middle and North Rabbit Ears. Continue down until the rocky rib on the left disappears, then head left to the base of the West Face.

One of the true classics of the Organs. Climb up the bottom of the West Face for 100 feet or so unroped to a good belay spot. The route goes up the northern half of the face. (P1) Climb up 60 or 70 feet, traverse right on a steep slab, go up a little open book, step far left into a dish foothold and muscle up steep rock with finger holds. Another 30 feet up belay from the top of a pillar. (P2) Next go directly up a steep slab behind you with small footholds. Then head left and finally back to the right on easy rock to a great concave place about 1/3 of the way up the face. (P3) Now climb up fairly easy rock on the left (rather than going to the cracks at the rear of the hollow) to a stance just below a slight overhang above which is a long, smooth slab. Step up over this using good finger holds and run the rope out. This puts you on the Shoulder, where the West Face runs into the perfect vertical slab of the North Face. The sight from here toward Sierra Blanca, past the vast suspended bulk of the Church Key, is one of the great sights of the Organs. (P4) Take to the vertical rock at this corner and bear up and right, around an airy hand traverse to a belay about 120 feet up. (P5+6) Then bear up for two more pitches, staying left in general to keep it easy, to the top. Everyone likes this climb, but no two people agree on the crux pitch. The route described has been varied in too many minor ways to mention in detail. 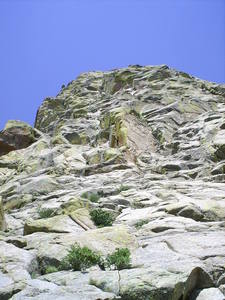 The route takes the left side of the two promin… 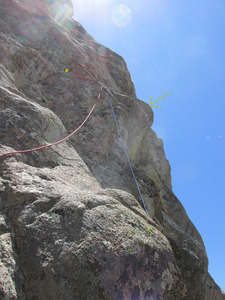 Start of Pitch 4. The "bulge" in the descriptio… 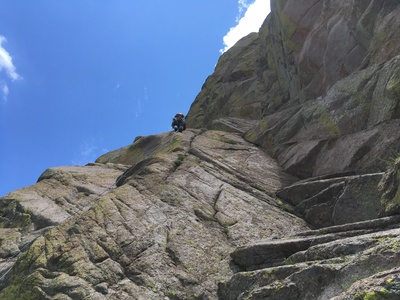 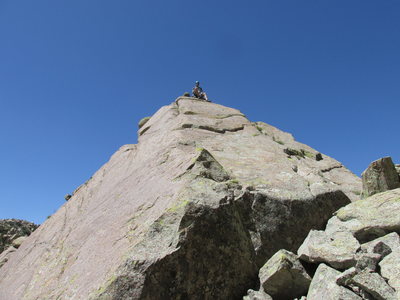 Jake on top of Church Key. 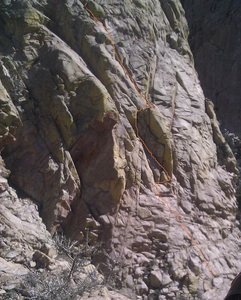 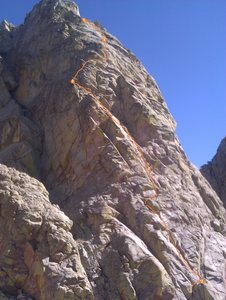 Upper pitches as seen from midway up North Rabb… 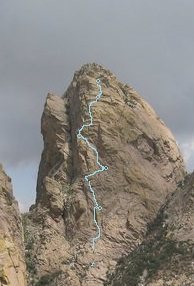 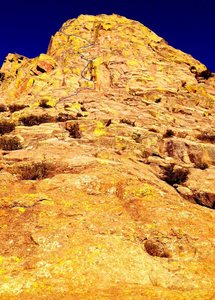