On the left side of the trunk there is an obvious tree ledge splitting the cliff, climb\scramble up to a ledge with a tree growing out of it, pull up over this and climb straight up over a incipient vertical crack system, past a fixed pin with good gear to a bolt stud that you can loop with a small nut and a huge ring bolt anchor.....

[ Admninistrator's NOTE: From the photo in "Left Variant" it appears the climber is on the middle of the 3 routes sketched on the "topo" of the "North"/"West" face. However, I've never seen a pin on this climb, which goes straight up from the flat ledge with a pine tree on it, i.e. directly below the bolts on top. THIS climb is fairly unprotectable.

However, if one scrambles [the usual technique is to chimney with your back to the tree] up 6-8 ft to the next higher ledge above the "tree-ledge" (more of a dirt ramp when you get there) there is an angle piton in the crack about 12 ft up, and THIS climb is quite protectable as it follows one of the only continuous cracks on this side of the cliff.
Thus, I'm not sure WHICH climb is being called "Left Variant". R Hall, May 2015 ] 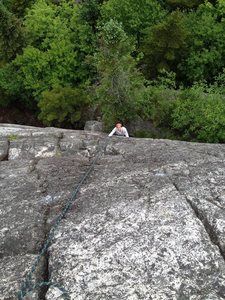