Routes in Below The Old New Place

A beautiful, slightly-overhanging finger crack with just enough footholds and pockets on the faces. Shake out at the hand jam rest before a couple of thin, cruxy face moves to easier terrain at the top. Bear to the right up high to reach the anchors.

Originally rated 5.11c/d, but general consensus is that this is a notch or two easier. Still, it's sustained (for White Rock), with no great rests.  A great first WR 5.11 crack, because it can be sewn up with finger-size cams.

At least 2 longtime LA climbers swear this crack was not called Manic Crack back in the day; that this and the crack to its right (now called Lost Nerve in the guidebooks) were referred to as the "Twin Cracks". This makes sense, that the "Manic Crack" name resulted from its nearness to the sport climb "Manic Nirvana", which was bolted in '89 or '90, but most of the cracks here and even some of the faces had been climbed earlier, on TR if not on lead.

Rack of cams from a #0.3 camalot to a #2 camalot; some may want 1-3 extras of #0.4 camalot size. Nuts also may be useful, though they're harder to place from pumpy stances.
At the top, angle to the right from the top to the 2-bolt anchor for Manic Nirvana (the sport climb just to the right). 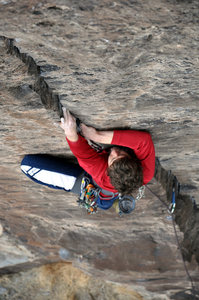 Solid finger locks are the norm on the route. M… 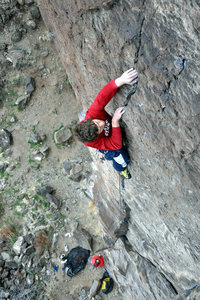 When the finger crack ends it's on to the tiny… 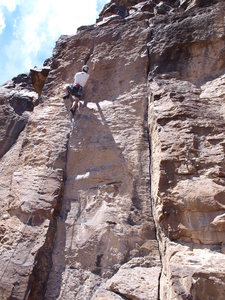 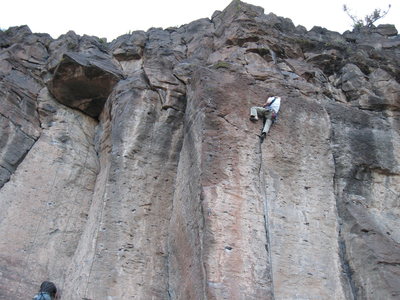 George Perkins placing a piece to protect the c… 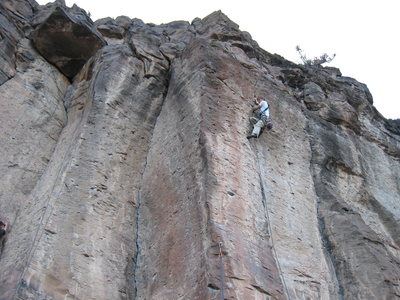