This eliminate problem climbs a difficult but contrived start (at the bottom stay direct and avoid the better holds to the left and right) but quickly eases and gives way to easy but fun moves up the slab - not a classic by any means but perhaps worth doing after climbing the neighboring routes.

Belleville, named after Belle Van Dusen, was the name of the original mining town that started out in Holcomb Valley in the spring of 1860. When elections were held later that same year, to determine the location of the county seat, Belleville narrowly lost out to the city of San Bernardino by a mere 2 votes, and yet two years later it was almost a ghost town.

Located between Shantytown Swing on the right and Psychedelic Sluice on the left. 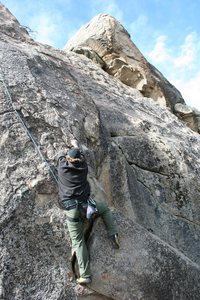 I think this is Belleville? 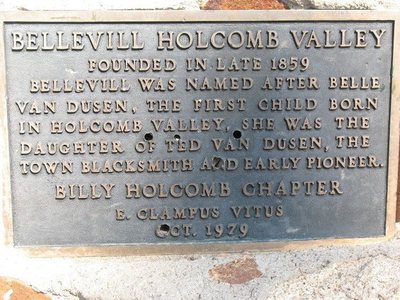