This is the finest multipitch free-climb of its grade in the Southeast. If you want sustained climbing with big air and on perfect granite, this is the route for you. The Glass Menagerie is the obvious overhanging line up the center of the North Face of Looking Glass. It is equally good as an aid climb, as it is a free climb. Its cruxes are well protected and the rock is almost always stellar. Please be courteous to other parties if you are trying to work out the free moves. This route gets plenty of traffic and you will likely be sharing the route with other climbers if you try it during peak season.

Start climbing up the easy face towards the obvious shallow right facing corner. You will eventually be faced with some 5.11 moves on great rock with mostly bolts for pro. You will then encounter a funky steep section that is protected with some pretty rusty bolts and sort of rotten granite. This is short lived and eventually you will traverse out far right on a ledge system (5.8? rotten) that will take you to a bolted belay. Two nice bolts and an angle for the belay. If you are hauling make sure you put your haulbag in the proper location for takeoff on the deck.

This is one fine pitch of climbing. Start cranking hard moves right off the belay eventually scoring a nice kneebar rest under a shallow roof. Get ready for some thin face. Climb out past the roof and up past several bolts onto the beautiful face and end up finishing by traversing onto the exposed face placing a few cams to gain a nice little ledge belay below a flaring corner with a splitter crack in the back. Two bomber bolts will make your belay.

After a little rest, rack up with some cams and stoppers for this pitch. You will have a hard time with this one if you don't like rattly fingers. Climb a short crack in a left facing corner with great pro to a decent ledge with at least two bomber bolts for your anchor.

This is the money pitch. Get amped right off the bat because you will be loving the climbing here. Make some face moves off the belay. Then break out left through the improbable looking roof. You will encounter jugs, laybacks, and crimps out of this masterpiece. Keep cool for the first thirty feet off the belay. There is big air with bolts for pro and only 5.12 moves till you reach the lip of the roof. It suits the route that the hardest move is at the steepest part of the whole wall. Try and get a breather before you pull the crux. There are good bolts in between the bad ones for the whole roof. Once at the lip, pull a pretty dang hard boulder problem (V6?) and gain a thin lichen covered face. This face is about 5.10+, but it only has two bolts for pro. They are painted black so if you don't see them just keep lookin. Once you've pulled through the face you will find a two bolt belay for your anchor.

This pitch is only part of the free route. The aid line went up and left out of the roof, while the free variation goes up straight past the two bolts described in the previous pitch. Down climb down and left off the belay with only one bolt for pro. You may be able to get some small wires or aliens in as well. You will be angling down and left at about 7 o'clock off the belay. There was a fixed runner off the bolt when we were up there. This pitch will be sort of scary for the leader but terrifying for the second, as he will actually be doing the lead climbing. You will encounter a 2-bolt belay about twenty feet above the lip of the roof proper here.

As Mike says below, you can link pitch 5 and 6 and save your second from doing the heinous down climb of pitch five with a semi-top rope. Either way you do it you will climb a splitter hand crack up and eventually gain a fixed nut anchor at a little roof. Traverse out left a few feet to regain the crack (crux 11.c?). Climb the hand crack that will turn into a reasonable off width that overhangs slightly and ends with a slabby right leaning finish to gain yet another two bolt anchor.

Climb up off the belay pulling through some thin hands past a bulge and then on to finish the crack up on a slab. You will eventually run out of crack and slab climb up to the top on easy terrain which can be wet if it has rained recently.

I hope this topo information is helpful to all that use this site. Remember, this is how we did it and you may do it differently so you may disagree with my beta.

North Face of Looking Glass. Hike in from the obvious trailhead at the parking area heading south towards the North Face. It will be the first route you come to once at the wall.

It is possible to retreat from any pitch but you may have to leave some biners on the raw bolts. Walk off from the top.  Crash the rhodos heading climbers left. You’re aiming for a gully between the North Face and the Hidden Wall.  Follow the gully down and wrap around the base back to the bottom of GM.

We took a pretty full kit so we could work out the free moves. A nice set of cams along with some stoppers and offsets+brass will suffice. Bring along a lot of runners and at least 8 draws. We took some light weight steps to aid the roof and clean the holds before we free climbed it. A portaledge is nice to rest on if you are trying hard to redpoint. Hauling is a breeze due to the steep nature of the wall. 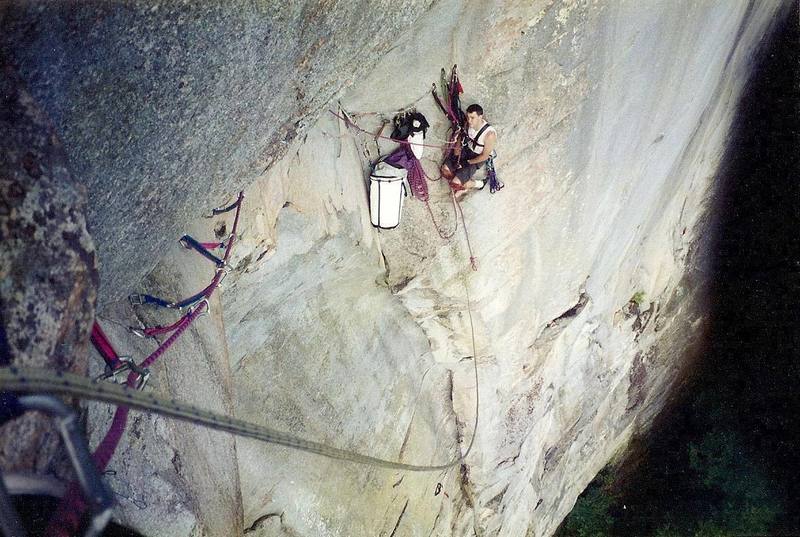 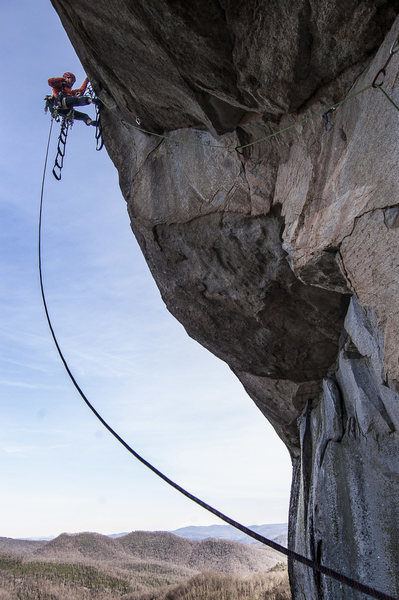 [Hide Photo] Aiding out the Roof 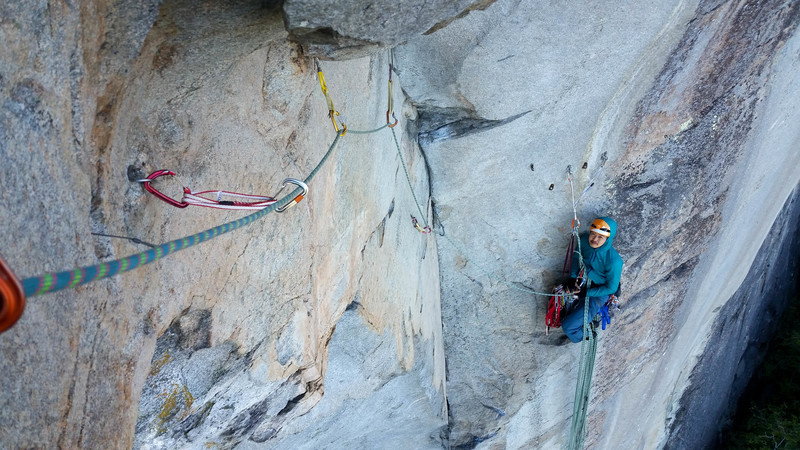 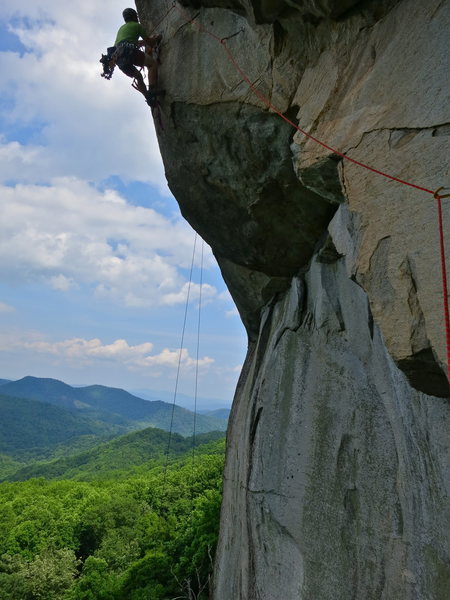 [Hide Photo] For those of us not cranking 5.13 this still makes a great aid line. 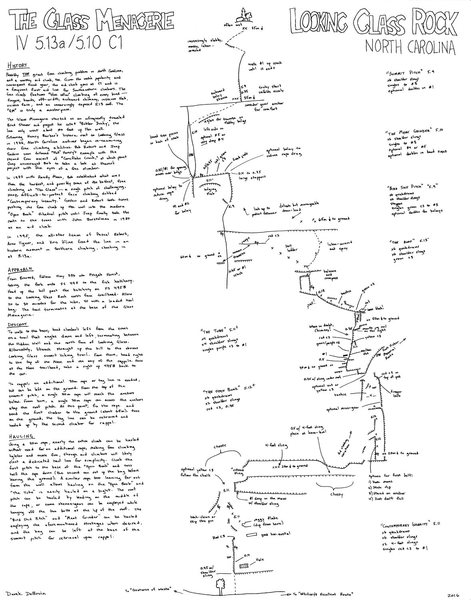 [Hide Photo] Free climbing topo for the GM, though there should be enough beta for an aid climber to make a solid go of it as well. 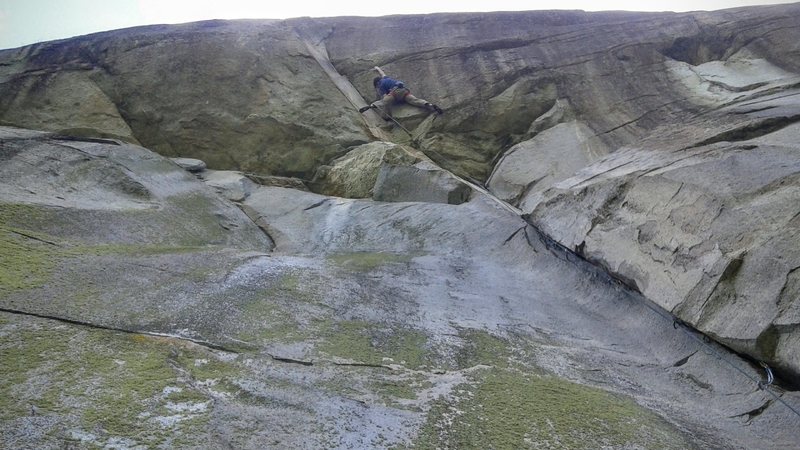 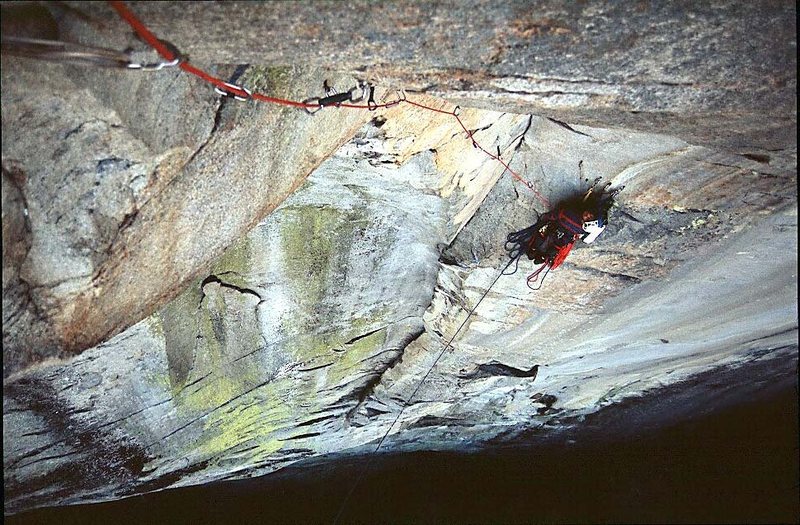 [Hide Photo] Fritz luxuriates at the belay. (We were a bunch of nancy boys and aided the route) 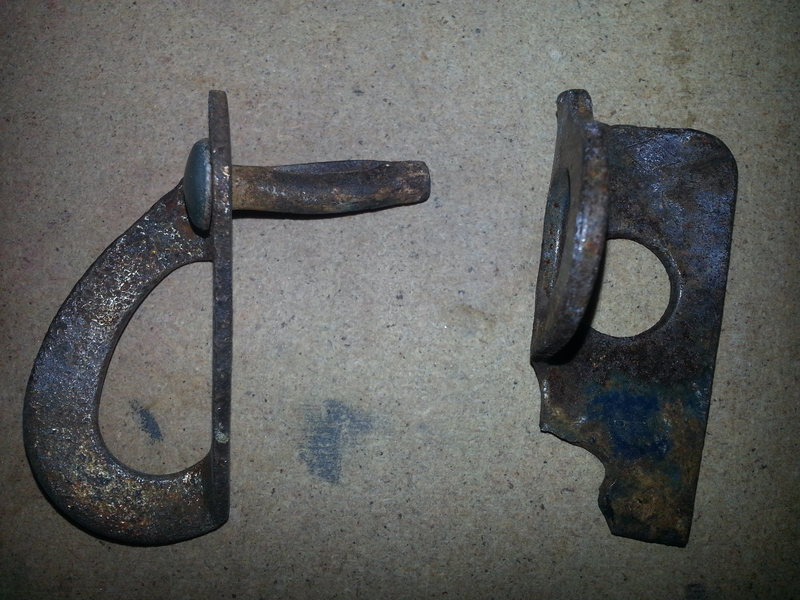 [Hide Photo] Some of the older fixed pro on P-1. The pin is definitely not an original but it still broke with only a tap or two as it was being removed. A single bolt (#2) was used to replace these two pieces… 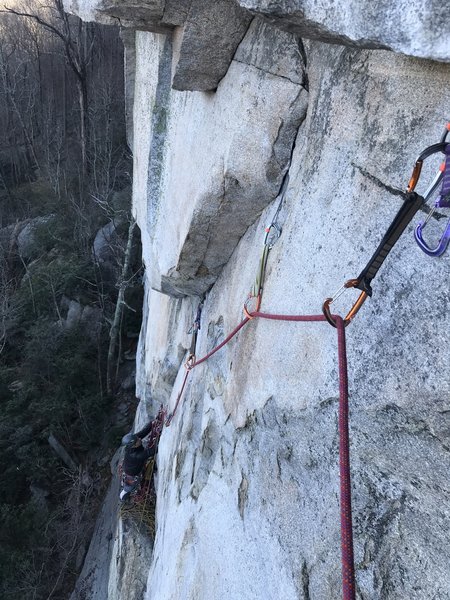 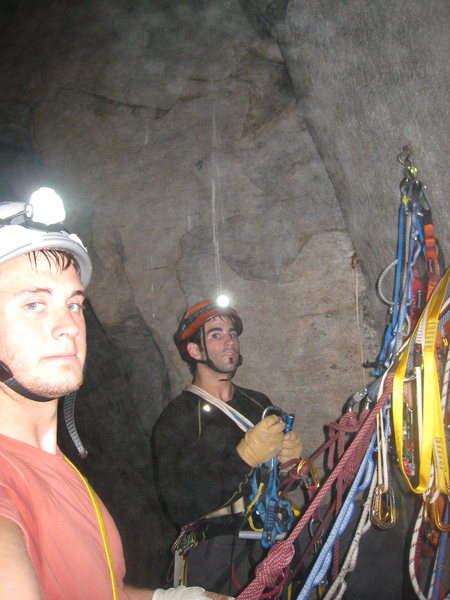 [Hide Photo] start p5 in the dark while its raining 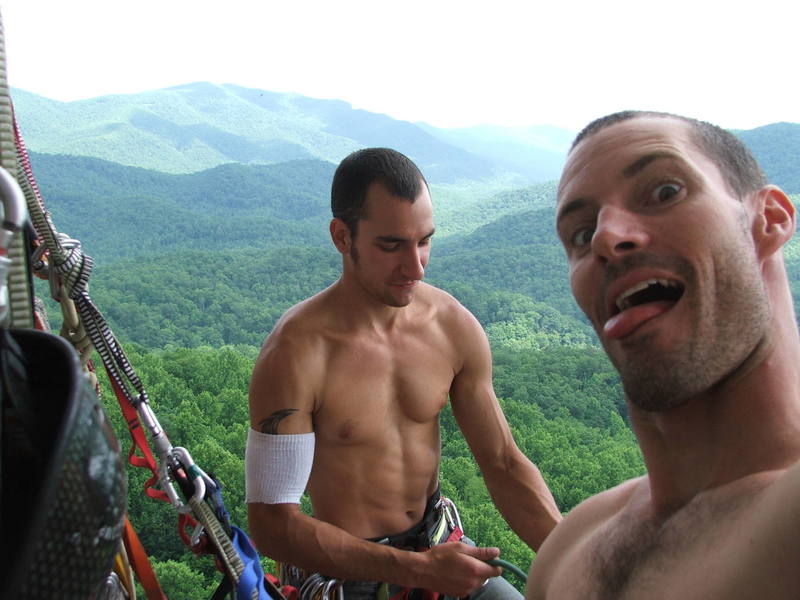 [Hide Photo] Chad and Lee racking up for a go on the crux 5.13 pitch of the Menagerie. Lee cruised this pitch second go. 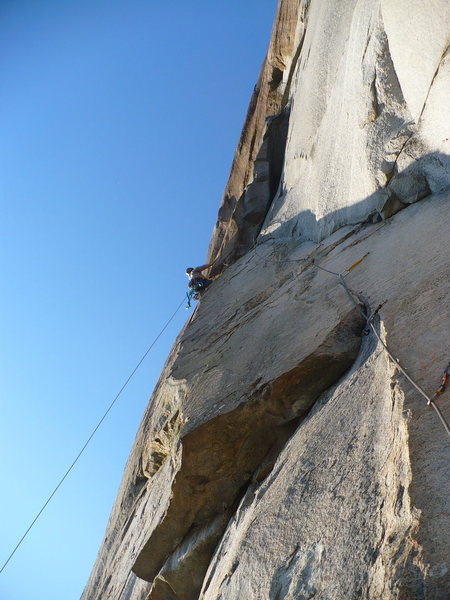