Routes in The Thumb

Courtesy of George Perkins: "The long NW ridge of the Thumb is one of the two great ridge routes in the Sandias. Although the climbing itself is mediocre, the position the climber finds his or herself in is memorable, as one climbs up on an exposed ridge with great views of Upper La Cueva Canyon to the left and the Rio Grande valley to the right.

"Generally, multiple variations are possible on the 5th class pitches, with the easiest passage being marked by the lack of 'rock lettuce'.

"Although one guidebook warns to allow a full day for this climb, a competent party comfortable simulclimbing or soloing on easier terrain will be able to complete this route in a few hours. Retreat from this route would be time- and gear-consuming; in most instances, continuing over the top and down the standard descent Southeast Ridge (a.k.a., standard descent) would be recommended."

Courtesy of George Perkins: "The Thumb is the prominent twin summited rock south of the La Luz Trail; the NW ridge ascents the right skyline as viewed from the upper parts of the La Luz. Hike down the La Luz ~1hr to the last West facing switchback before the trail crosses from the S to the N side of La Cueva Canyon. Follow a small trail west (if you cross some rusty water pipes in the first 30', you're at the right place) and ascend to a large ledge and tree directly on the NW ridge, where the route begins. A direct start 150' lower is possible as well."

The described first pitch starts on a smaller ledge with a small tree after about a 15 foot scramble past the end of the wide ramp.

Revised this description June 2014 after climbing it a second time. It now matches well with that shown in the topo in Hill's guide (pg 163, 3rd ed). Also see the below marked photo which has been updated. 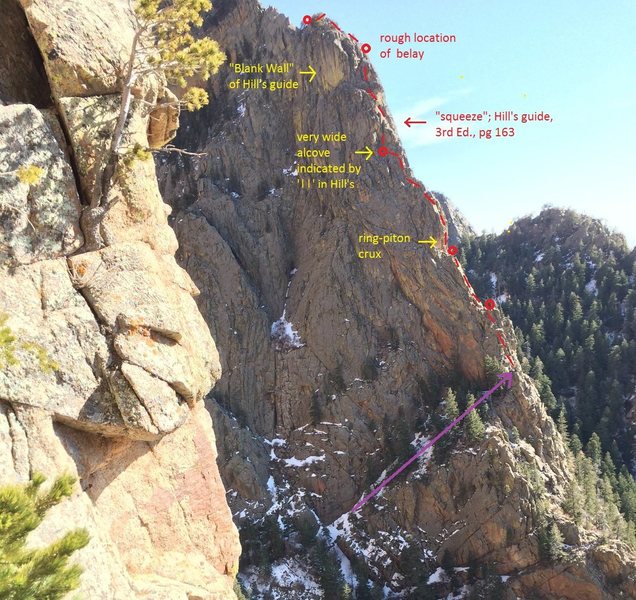 I believe this markup very closely follows Mike Hill's guide, page 163, 3rd edition. This photo replaces an earlier markup 2011 version that missed P2 and much of P3. Omitted is the P4 ring-piton variation (pin pulled out). There are many other ways to do the route but this is a very nice line.

Pitch 1: At the smaller ledge, head straight up cracks, on or just left of the ridge line. Some choss in the latter part of the pitch. At about 100 feet, look to the right side of the ridge for a south-facing slab. Theres a ~7 inch diameter tree on the far side of the slab top. Belay near here. 5.5, ~100 feet.

Pitch 2: Continue straight up the ridge, face climbing up the middle of the wall above or ascend it's left-most edge. Continue to a minor notch below a ring piton (hard to see if you are tucked into the notch/pod). 5.5, ~100 feet,

Pitch 3: Continue up the ridge, almost immediately ascending straight up past the ring piton (route's crux); piton might be backed up with a small slider nut? After 20 feet or so, cross slightly right and then continue up cracks through relatively-lichen-free rock. The steepness levels off before steepening again up a 25 foot (?) hand / finger crack that trends slightly left. At the top of the crack, jog left to a large alcove and belay. 5.6, ~140 feet.

Pitch 4, squeeze pitch: Start up the dihedral in the back of the very wide alcove and then jog right a few feet past a bush and up through the squeeze or chimney (a "V" notch as viewed from the very wide alcove; the topo in Hill's guide calls it a "squeeze").

At the top of the squeeze, trend up and right and then up a chimney followed by easy broken terrain trending right. Eventually find a short dihedral (10 feet tall?) topped by nice ledge to the right with a small dead tree above it (6/2014). If rope drag permits, continue another 10 or 20 feet to a broader ledge. 5.4, ~185 feet.

Also from the top of the squeeze, one can head left and then back up, eventually finding the short dihedral and ledges above. I find this way unappealing and includes a spooky ~3 foot tall block one is tempted to stand upon.

Note: There was / is a separate variation to P4 to climber's left, which included a ring piton. The piton pulled during a lead fall and inquiries here about replacing it were not affirmed.

After pitch 4, scramble directly up through blocky terrain to a minor summit and drop into a notch with a big tree. 4th class, ~100 feet.

Roughly 1000 feet to summit: There may be a bit of low 5th class immediately after the above minor peak. Start simul-climbing or free soloing as soon as reasonable. From George Perkins: There is "... 1000' of scrambling up mostly 3rd class, with occasional 4th class moves remains, with precipitous drops to enjoy on either side. When you reach the first false summit (the West summit), drop down into the notch beyond it, and a 30' section of 4th class gains the higher (East) summit.

Courtesy of George Perkins, and I agree: "Standard Sandia rack, most will be fine with a single rack up to 3". Long runners are recommended to minimize rope drag. An ancient ring-pin at one time 'protected' the crux move" of P4's ring-pin variation "(and could be backed up with gear)." However, the ring-pin of the P4 var is no longer there. Also, the describe route eats hexes. 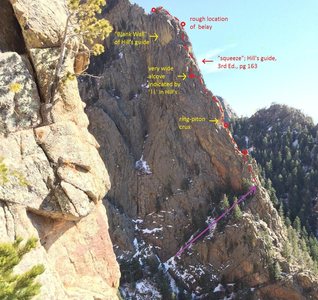 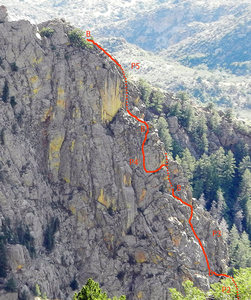 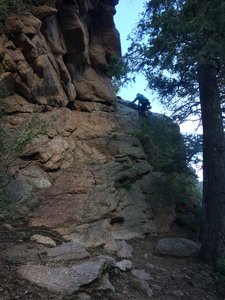 The start of P1 is up this small ramp and aroun… 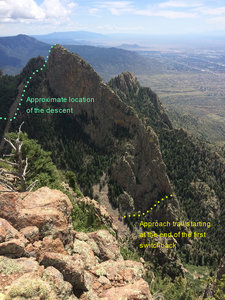 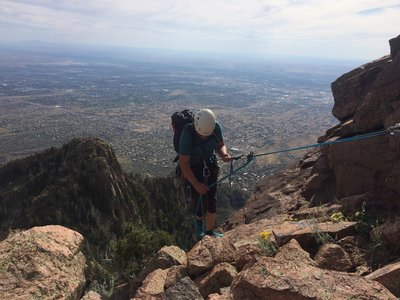 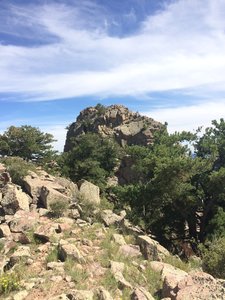 Last traverse on easy terrain before the summit… 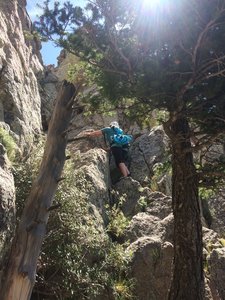 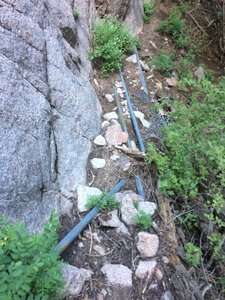 The water pipes, visible just after getting off… Below the pitch 3 crux, showing my first 2 gear… 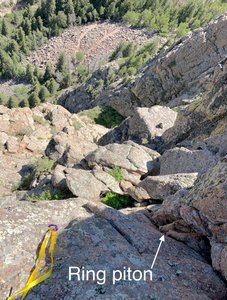 Above the crux on pitch 3 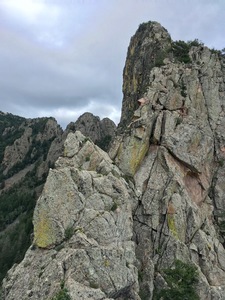 The ridge above Pitch 4