Check status and details at: nps.gov/arch/planyourvisit/…
-Read about Anchor Replacement and Restrictionsmountainproject.com/v/utah/… in Arches National Park

The route is located at the very north east end of the south wall of Park Avenue. Park over by the organ and hike up to it via the Park avenue trail and then a ridge of harder rock above. Heart of the Desert is located on the same buttress but about 100 yds further to the west.
The route has a burley start move, then it eases off. By and large its wide hands to OW, but the OW is relatively easy as its low angle.
Both anchors on the route were added after the first ascent. According to Bjornstads book, the FA was done to the ledge above. However, the rock was so soft up there it would not hold an anchor. Over time, climbers added an anchor down lower in the better rock and this has been used for years. An even lower anchor exists below this one and before the widest part of the crack. When I replaced the anchors, I replaced both. The logic being that people would eventually put in another one down low and then we would still have a tat anchor uglifying the cliff (What the Park does not want).
If you want to do the original line, go to the ledge.

At the end of the South Park Avenue wall facing the Courthouse. Pretty location. 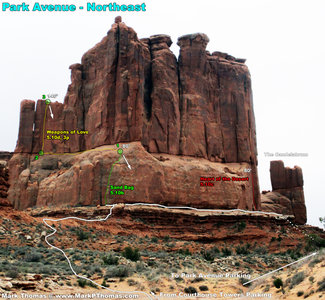 Route topo of the northeast area of Park Avenue. 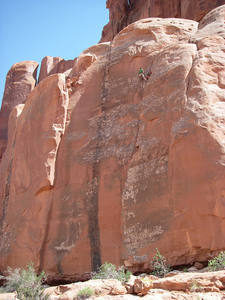 Anchor replacement on Sandbag. Photo by The Mini.