Routes in The Pulpit

Effective July 1, 2020, please do not travel into New Mexico to climb.

On July 1, 2020, the New Mexico state governor issued an executive order (cv.nmhealth.org/wp-content/…) requiring all visitors from out of state to self-isolate or self-quarantine for a period of at least 14 days from the date of their entry into the State of New Mexico or for the duration of their presence in the State, whichever is shorter. The terms "self-isolate" or "self-quarantine" refer the voluntary physical separation of a person or group of people in a residence or other place of lodging. Any person who is self-isolating or self-quarantining may only leave a residence or place of lodging to receive medical care and should not allow others into the residence or place of lodging except for those providing medical care, emergency response, or other individuals designated by the New Mexico Department of Health.

Additionally, NM state guidance requires all persons to wear a mask anytime they are out in public, including outdoor recreation areas.

This route ascends the West Face of the Pulpit, and passes a cave in the cliff at mid-height. I didn't find the cave to be too exciting, but apparently that is the main attraction to the Pulpit. This route would almost qualify as a waste of time, if not for the excellent 3rd pitch, which is very interesting on great rock, with just the right amount of gear.

This route is most frequently described as having 4 pitches, although we climbed it in two pitches (with a 60m rope) with little difficulty.

Begin directly below the cave, at the far right end of a small ledge with several trees.

P1: 5.7 or 5.8+ There are two options here. The original route climbs a 5.7 chimney. A newer variation climbs up a right-facing dihedral to sketchy face climbing at 5.8+. Numerous haphazard rap stations remain as a testament to the lunacy of this variation. Unfortunately I followed the variation, so I can't accurately describe the 5.7 version.

P2: 5.8+ or 5.7, From either variation, climb up to a large ledge where the two options merge. Follow mellow, low-angled rock in a large cleft into the cave. Explore the cave, then downclimb 10 feet. Traverse right around a rib to a spacious ledge and two brand new bolts.

P3: 5.7+, The crux lead. Above the belay is a series of three right-facing dihedrals. The two right-most (southern-most) extend down to the belay ledge, while the furthest north only appears 15 feet above the ledge. Begin up the middle dihedral, (or the left-most of the two that start off the ledge), with a few powerful moves over the slight bulge. Continue easily until its possible to traverse left to the next dihedral. Follow this to its end, then traverse further left, past a bolt that is nearing its 40th birthday, along a slightly runout face to easier terrain. Head straight up to a good ledge below a huge, leaning, right-facing dihedral.

P4: 5.6, cruise up the dihedral to a belay tree below the summit.

Descent: Continue E to the summit. There are 3 possible rap anchors, depending on your level of daring. The safest is right at the summit, but may require two ropes. If you have one 60m rope and are brave, downclimb NE over exposed rocks and shrubbery to a tree with rap anchors. Rap down the gully. One 60m rope will not reach to the next anchor, so TIE A KNOT in the end of your rope. An easy 30 foot down climb to the NE leads to the next anchor, where a 60 foot rap reaches the ground. Scramble down the base of the cliff for ~100 feet to the base of the Cave Route.

Gear to 3 inches, many small pieces. 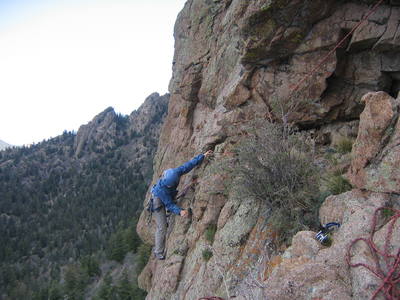 Approaching the mid-way anchor. The Cave is be… 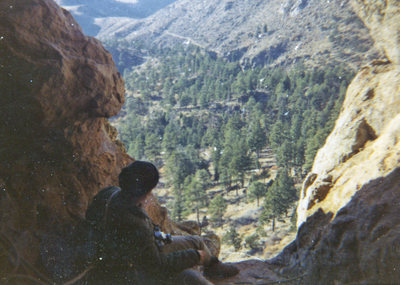 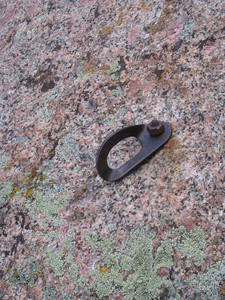 The ancient bolt on pitch 3. Bomber! 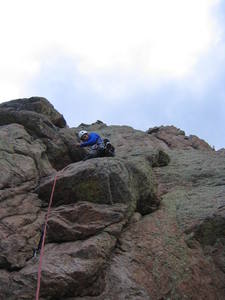 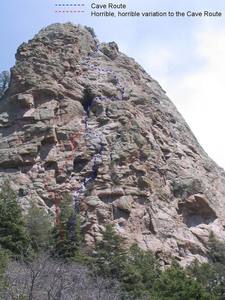 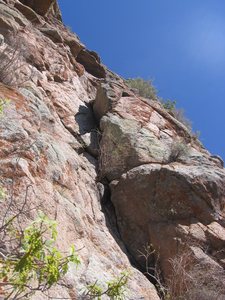 Start of the 5.7 cave route climb. 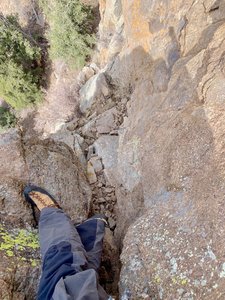 Just above the OW slot on pitch 1, and just bel… 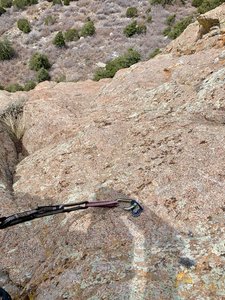 View down from the fairly new bolt on pitch 3 -… 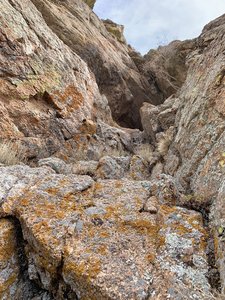 After the traverse on pitch 2 - the cave is dir… 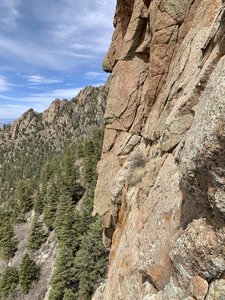 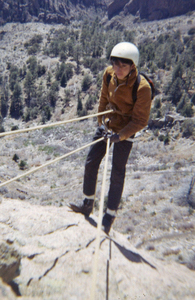 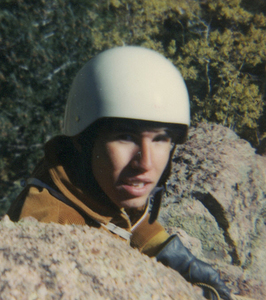 Mike Roybal on the Pulpit 1968

More About The Cave Route