Routes in The Taipan Wall

Described by the local guidebook as, 'the premier pitch in the country', Serpentine's 2nd pitch is an absolute must-do if you climb at the grade. This is the Taipan Wall's centerpiece route, and each year hard-men from around the world flock to this cliff to attempt this mega-classic. Undoubtedly the best route in the Grampians, and clearly the best 'hard' route in the country. Featuring a bit of everything, from technical stemming, to roof-thuggery, endurance crimping, and arete slapping. If you only do one route in Australia--this is the one!

This route was orginally given the aussie grade 31 (13d). At the time, HB felt it was the hardest route he had done, after spending 8 days working for the redpoint. However, during this era it was customary to remove all of the fixed gear between attempts, a practice ignored by all modern suitors, which must have affected the perceived difficulty. Over the years the grade has settled in at 29 (~13b), though some will claim the 30 grade for a 'true redpoint'. This route was first flashed by the legendary Jerry Moffat, but locals are unaware of the route ever having received an on sight ascent (placing gear).

Although the route features a bit of everything, its ultimately an endurance test, at over 35m in length, split by several good rests.

P1: 5.12a/d, 30m, The approach pitch. Often folks will "send" the route without sending this pitch, due to the fact that this pitch is a pain in the ass to lead and clean, and a difficult on sight despite the 'lowly' sandbag grade of 24. Most folks will go for the on sight on P1, but if they fail, they will fix a rope to the start of P2 for their future redpoint attempts and ignore P1.

The pitch begins far to the right of the upper Serpentine Headwall on a pile of cheater stones. Gain the horizontal break and hand-traverse left along the break for 10m. Head straight up a difficult crux boulder problem that may involve some dynos. Easier ground and a slight traverse left leads to the belay below an intimidating roof. 25m to the ground from here (may want to fix a rope for jugging).

P2: 35m, 5.13b, The best pitch south of the Equator. Charge over the dramatic roof with feet flailing. You may recall a North Face poster of Lynn Hill surmounting this obstacle. After a good rest above the roof traverse right into the obvious scoop feature. Head up the scoop with extreme stemming and body tension. Exit the scoop on the right, and ascend the double-arete column. The column terminates in a blank 8 foot section of crux crimping. Barndoor maneuvers gain the huge horizontal crack and a stellar double-handjam rest.

Traverse left out the horizontal crack, and snake your way up the amazing headwall of brilliant crimps and jugs. Several good rests on the headwall split up desparate lunges to good holds, before a final mad dyno to the lip of the cliff. Like most Australian routes, there is no anchor. Some folks downclimb to the last bolt and lower off.

Center of the Taipan Wall

Don't read this if you want to preserve the on sight! The route has 8 bolts, and requires numerous gear placements. However, this line is rarely approached as a trad climb. Many, many locals rap-in to place the gear, although its not uncommon for un-witting foreigners such as myself to lead it ground-up. Once the gear is in (regardless of approach), it is rarely removed until after the send. 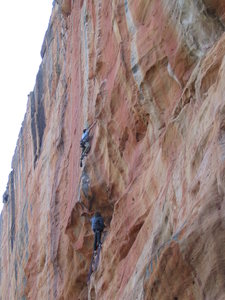 Hey Mono here is a shot where you were not "cro… 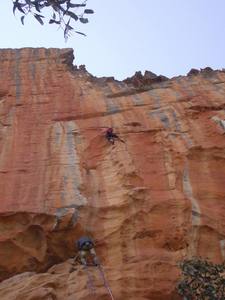 Atop the double-arete section, just below the c… 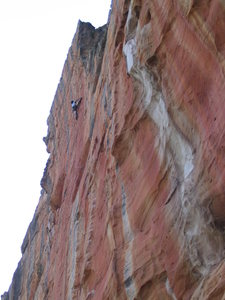 Climber on the upper headwall of Serpentine 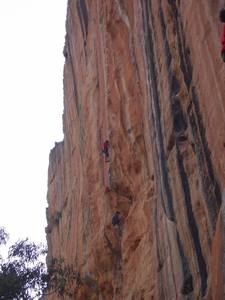 Just before entering the scoops on Serpentine's…