This secluded route must be one of the best of the many neglected routes in Smith's "Main Area". Located high on the Morning Glory Wall, above such crowded lines as Magic Light and Overboard, few Smith regulars are even aware of the route's existence, and even fewer have set eyes on this line's beautiful stone, despite the fact that its visible from the River Trail.

The climb is actually approached via Cocaine Gully. Head toward the "Crack Babies" area on the west wall of the gulley. About 40 feet down-canyon from Crack Babies, locate a black, moss-covered slab. Leave the packs here and only bring the essentials up the slab. A short boulder problem (do-able in tennies) gains the slab. Wander up 20 feet, then follow an obvious trail another 30 feet south, then west around the corner to an extremely exposed ledge (use caution!). Traverse the ledge 5 feet west to a two bolt anchor below the "Rolling Stones Wall", a 30 foot wide, 60 foot tall wall of beautiful pink tuff. The bolts at this anchor are a bit sketchy, so you may want a few 1-3" pieces to backup the belay. 'Exile...' is the left route on the wall.

Begin gingerly above a narrow ledge, on relatively easy moves to the first bolt. The exposure may make this feel a bit harder than it actually is. Climb with increasing difficulty to the 2nd bolt and a decent clipping stance. A few rest jugs lead off to the right, but you will eventually need to traverse back left to the crux and the third bolt. Several more bolts lead up on increasingly easing terrain to the top of the wall, where the angle kicks back and the pink stone disappears. 10 more feet of slabbin lead to the 2-bolt anchor.

Left route on the Rolling Stones wall, about 200 feet above the base of Magic Light. Approach via Cocaine Gully.

Bolts. Bring some long draws or slings to clip in the belayer, and perhaps a couple of 1-3" pieces to backup the belay bolts. 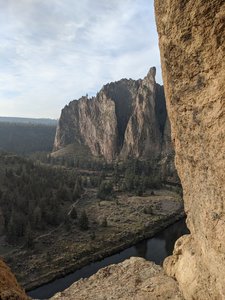 Exile starts just around the corner on the face…

More About Exile On Main Street