Onsighted to the last move on a top rope inspection run by Matt Birch, this route is now bolted and an open project. (Matt left for his V14 boulder projects in Flagstaff before he had a chance to red point it.) We're all working on it, so it's an open race for the FA. Matt's back in April and he will get it on his next run, so if you want it you better get after it!!

The 12d rating is subject to change, but it's several letter grades harder than anything else on the wall. Expect crimpy, technical, powerful moves, a couple of hard clips and the crux up high.

It's been redpointed by the irascible EFR. No more open project, no glory now. Just good hard climbing for all those who get on it.

Goes straight up the steep unlikely looking face between Armed Robbery and Crime and Punishment. 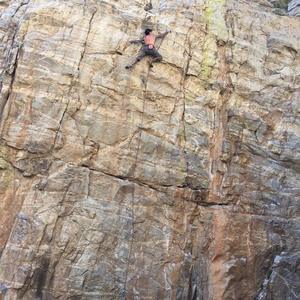 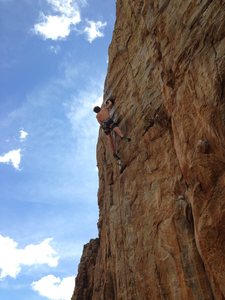 Dom trying to dry the route with his shirt in a…