Regular Northwest Face of Half Dome

This route has undergone changes since a significant rockfall took place in July 2015. At least two pitches (P11, P12) were removed entirely.

Additionally, the bivy site used for this climb and the Upper Death Slabs approach are directly under the unstable zone and are subject to higher risk.

For the most part, the first eleven pitches stay to the left of the rockfall line and the traverse on P12 heads across the top of the roofs that were a result of the rockfall. Traversing this close to the roofs can also be avoided by continuing higher before penduluming to the right.

That said, you still wanna feel like a hero? Here's how.

Get your gear and partner in order. Do an excruciating approach up thousands of feet, passing hundreds of knackered tourists from all over the world. Although a few will recognize you as a climber, most will look at you like you're a bit off in the head for shlepping an enormous, orange plastic backpack up the several million steps. And in many ways they're right, for you're about to pull off one of the most spectacular climbs on the face of our fair planet.

After you get your ropes and anodized knick-knacks settled at the base and take your last pee, cast off! A sea of rock; steep corners and blank faces; evening light and morning shadow; torn hands and no water to spare. Ledges that are just a little too small; gravity-defying rodents scamper about your face/head/neck and chest in the dark hours of the night looking for a wee delicacy.

At some point, you're near the top. They probably see you first, because They are always there, looking down, looking out. They exclaim in surprise and are honestly stunned. They cheer, and jeer, and all of a sudden you realize you're the center of attention like rarely ever in your life. You're a hero.

Then you top out. Your partner jugs. You haul a bag that is, finally, light. And the questions come. Food and water are offered, and goddamn it, it tastes GOOD. The light is amazing. The view incredible...the elation is darn near making you float, and the reality of the brutal descent isn't even enough to dampen it a bit. Congratulations!--wasn't it worth it?

Most of the climbing is very moderate--cruxes are short. Route finding is involved but not difficult, especially with a Supertopo. Difficulties are substantial but can be solved via smart thinking and tenacity.

The Routefinding Crux --For me it was pitch 22. As the topo suggests, there is a smattering of bolts all over the darn thing. Trick is, it's hard to determine which bolts to use and which to forego. Seems as though folks have bolted different variations and knowing which bolt to pendulum to and which to pendulum from is a nit bit tricky.

The Technical Crux--Color me stupid, but the 5.8 squeeze at the after the Thank God Ledge traverse is something that no man or woman should need to endure.

The Psychological Crux--The aforementioned Thank God Ledge Traverse lives up to its billing. You won't forget it. Watch your rope drag, too.

The Physical Crux--Let's just say it rhymes with "falling" and "crawling" and it sucks the life out of you even faster than it sucks out the energy. Go light, or suffer.

Follow the John Muir Trail for about 7.5 miles until you get to the shoulder. Follow the climbers' trail downhill along the base of the climb for about 25 minutes. Identify the base of the route by picking out a bay tree (looks more like a bush) about 70 feet up in the middle of the first pitch.

2 sets of nuts
2-3 sets of cams to a 3.5".
1 4.5"
Aliens are great on this route, but not as valuable as they are on many other Yosemite walls (there are less flaring pin scars).
There is fixed gear all over the place: ancient cams, stoppers, pins, and shiny bolts.

Most of the belays, especially down low, make use of fixed pitons and bolts and are pre-equalized with old rope as a rap-station. There are a few natural belays, most notably the top of pitch 7, which makes use of an oak tree that is a fair bit too small for comfort. It can be backed up though. 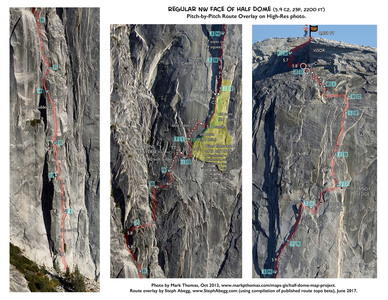 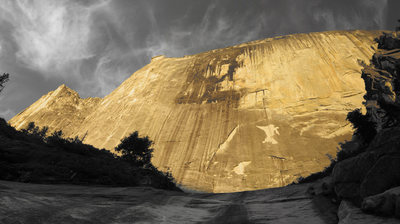 How I choose to remember Half Dome 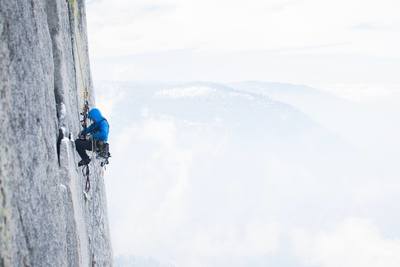 Partner jugging up our icy rope after an overni… 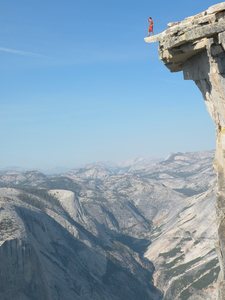 On top after climbing the Regular NW Face Phot… 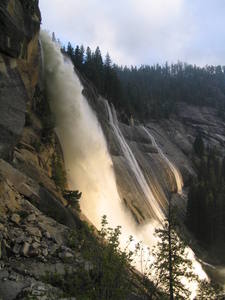 Nevada Falls on the Approach 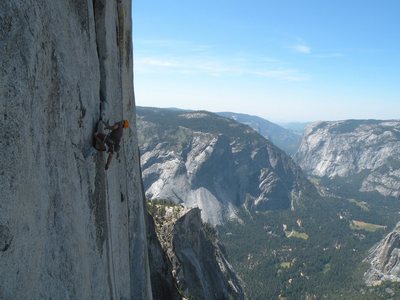 One of the pitches way up there photo by Scott… 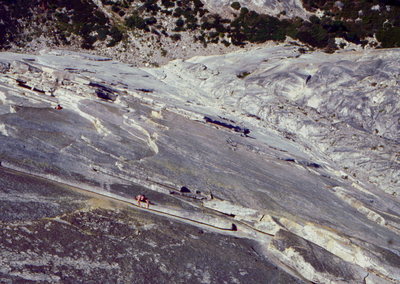 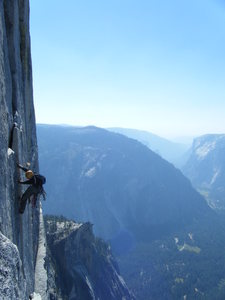 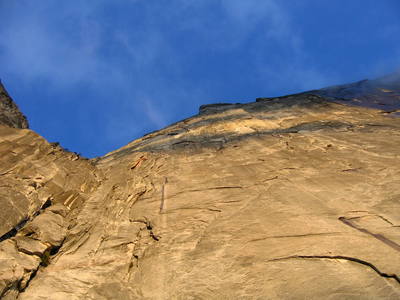 The NW Face in afternoon light. 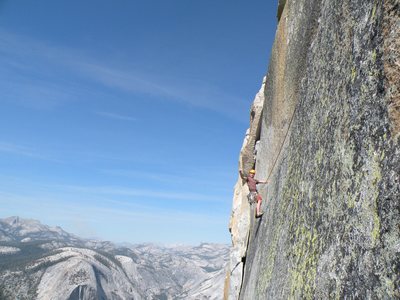 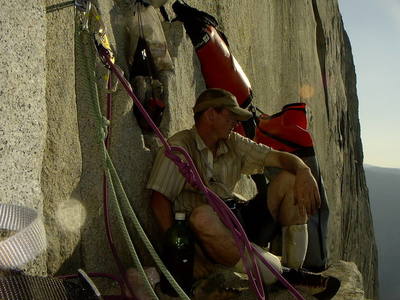 A lazy afternoon at Big Sandy. Big Sandy is pl… 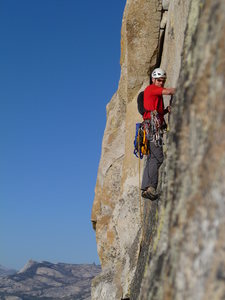 More About Regular Northwest Face of Half Dome