Routes in East of Peak to Peak - S. St. Vrain

This is a long, fantastic pitch of thin ice that forms up infrequently. It is located in the south fork of Deadman Gulch, which is a side drainage in the lower part of South Saint Vrain Canyon, 3.6 miles up CO Hwy 7 from the west end of Lyons (0.0 mile is the intersection of US Hwy 36 and CO 7). Parking is difficult after snow storms due to the plowed snowbanks along the hwy -- if the snowbanks are gone, it's a good bet the ice is as well.

When it's in, the first half is a narrow flow of 70-degree ice with little bulges; it ends at a stance beneath the crux pillar. Pull through this onto thicker, golden ice (75-80 degrees) and continue to a belay at 175 feet, next to a fixed rappel anchor (piton and wire). There's 25 feet of easier ice in a narrow channel above the belay that could be taken into the trees (you'll run out of rope with a 60 m cord if you try to reach the trees in one pitch). I would recommend this climb only to those proficient at WI5: the protection is slim in spots, and though none of the climbing is very difficult, a light touch is necessary due to thin ice.

Get a map (USGS Lyons Quad is a good choice) and find Deadman Gulch (about 1.5 miles east of Coffintop Mtn, and north of CO Hwy 7). Note the intermittent stream on the map: the route is located in the south fork of the gulch, above the left branch of the stream. It is not visible from the road. There's a 200-foot wall on the north-facing slope of the south fork; the climb goes right up the middle of the wall. This wall is the same rock band that wraps around a knoll to become December Wall on the opposite side.

The best method of approach takes the east ridge of the knoll for a few hundred yards to an old fence, hops over the fence, contours along the hill to its north-facing aspect, and then angles up to the base of the climb. However, unless you know the terrain well, you'll end up wandering in the woods trying to find this thing, and you'll wonder whether it really exists -- the ice is not visible on this approach until you're right under it.

A better method for first timers: either follow the stream in Deadman Gulch, or hike the hillside to its right (better), and continue up the main gulch. Somewhere around 1/3 mile into your hike, you should get a great view into the clandestine south fork of the gulch (it is from here that the photo was taken). Once you locate the ice, it shouldn't be much trouble picking out a line to reach its base. The direct approach described above is probably only 1/3 mile, though it takes about 30 minutes. Bank on an extra 10-15 minutes if you take the detour to locate the ice and discern its condition.

Short and medium screws, a light rock rack, and several long slings. The rock protection is not obvious -- search left and right of the route. Most of the ice was 3-8 inches thick in the conditions we found. A long screw is useful for the belay. You may want Screamers for the stubbies. 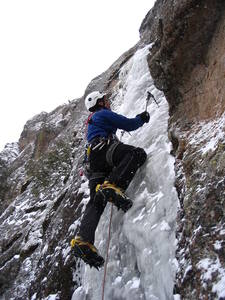 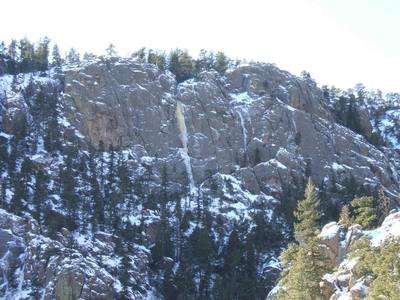 Deadman Gulch Ice -- the fat line up the middle… 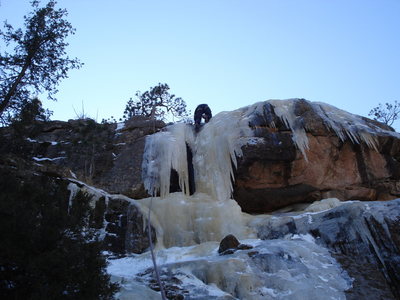 One of the several worthless heaps up and right… 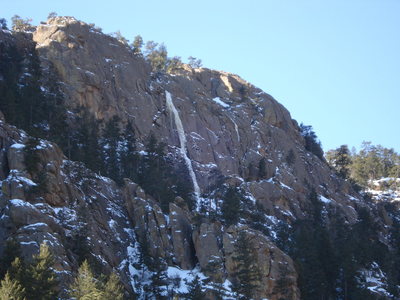 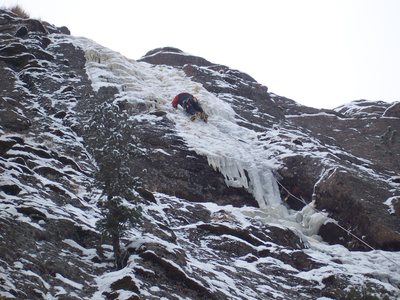 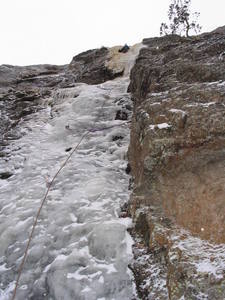 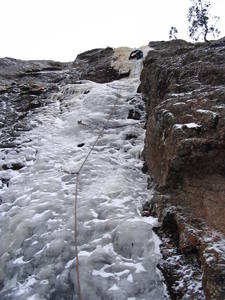 Dougald just above the crux. 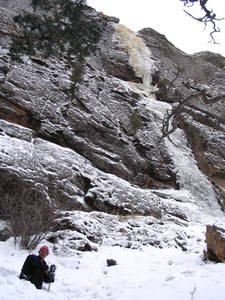