There has been only one reported ascent of this route - Russ Clune climbed it over ten years ago, placing three pairs of two pitons (six pitons total) to protect the roof moves. It's unknown if he placed the pitons on lead or not. Regardless, the route is impressive.

If you look carefully, you can still see the remains of the rusty pitons under the roof. It's unlikely that this route will see a second ascent.

Start at little arete in center of wall under roof, follow holds up tier to small dihedral and out left to tier in roof. Climb seam in roof out left and over.

On the first ascent (either on lead or on rappel), Russ Clune placed six pitons total to protect the roof moves; they are likely no longer viable, as the area seeps quite a bit. Do NOT TR this route; the pendulum is severe, and the awaiting trees are always hungry. 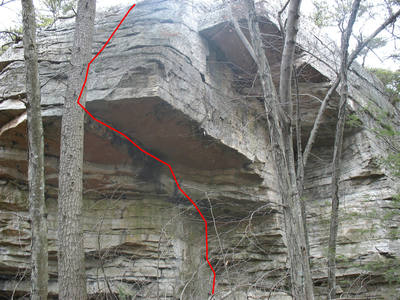