This is a fun, little pitch that caught the eye of a pair of dufi who thought that A Very Ament's Slab might be climbable without crampons in December after a snow storm. It turns out, we were just following in the footsteps of a pair of better climbers. This lies on the huecoed south face of the lower cliff seen on p. 200 below route 21 along Approach III in the Flatirons guidebook by R. Rossiter. Theres probably plenty of room for FAs on this cliff band for average blokes or lasses.

It may have been climbed previously...it was. However, no mention of this exists in the Flatirons guidebook or this database...until now.

Stop reading if you don't like beta. Start up an obvious line of little resistance up slightly-overhanging, jugs, huecos, and a tufa of sorts. You can use an orange & yellow Alien before you commit. Then a #3 Camalot fits decently in a hueco for the committing overhang. After 15 feet (the best part), it eases to less than vertical. You can fit a #3.5 Camalot in a hueco above the overhang. Move left to a slot for a #0.75 Camalot. From here, you basically go up easy, neat huecos all the way to the slab edge top of the lower cliff band. You can move left to a natural thread. 130.

To descend, move left then downclimb a couple overlaps to a rappel tree with 2 slings & a fat mallon ring. The rappel tree is visible in the photo on p. 196 Flatirons guidebook by R. Rossiter. Rappel 80 to the ground over 2 overhangs. Alternatively, you could go to the top of the gully which puts you near the base of Saturdays Folly, me thinks.

On the south side of the Third Flatiron, along the Approach III, this ascends an obvious, short overhang to a very huecoed face. This may climb what is called the Outer Wedge in Rossiter's guidebook. 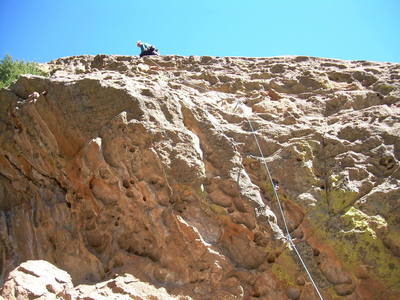