Routes in The Wedge

This climb can be done in 3-5 pitches, depending on the comfort level of the climbers. The ridge breaks itself up nicely into several shoulders which make ideal and stunning belay ledges. The start can easily be picked out from afar by noting two huge parallel grooves about halfway up the west ridge.

P1: 5.6-5.7. Climb up a corner system to the north of the two grooves. There is some vegetation here, as well as loose blocks. Stretching a 60m rope to its maximum allows you to reach a nice belay stance on the ridge next to a conifer tree. Otherwise, look for a convenient belay below said tree. 175'

P2: 5.7. An amazing pitch, that meanders slightly, and has some great exposure. Starting from the nice belay ledge with the tree, step out left to the north side of the ridge. Then climb straight up 15 ft into a crack that is almost directly on the knife-edge. Place some gear and then step over onto the south side of the ridge, onto good foot-holds. You are now directly above the conifer tree maybe 25 ft. Traverse to the right about 10ft, looking for a piton in a small horizontal lip. Then climb straight up from the piton and onto the next shoulder, where a spacious belay can be set-up. 80'

P3: Tackle the obvious weakness up the next headwall (5.6). A short ways further is another large shoulder and spacious belay. 75'

P4: Another weakness with an awkward block and wide pod must be overcome (5.7). Continue up the corner until it broadens. The slab above can be climbed directly to the summit (5.8), but does not protect very well. The regular finish traverses about 20 ft to the right onto the south side of the ridge. Then it follows a shallow crack system up to the summit. 90'

P0: 5.8 but a bit scary. The original start which is often skipped by climbing up a chimney in the gully between The Wedge and Lost Peak. It tackles a short slab straight up from the large bushy ledge. The slab is turned easiest on the left side, about 15 ft above the last pro and with a bad fall potential. Once this hurdle is passed, easy climbing gains the normal start.

While obvious from below, getting to the start of the climb may be one of its greatest difficulties. While approaching The Tooth, look for a way to traverse the tree-filled gully to the north and gain the grassy saddle directly below the last cliffs protruding down from the west ridge. From this saddle, keep left of the cliffs (Ingraham calls them Gendarmes) and scramble up the path of least resistance until you can see into the narrow gully between Lost Peak and The Wedge. Continue up this gully until you reach a chimney with a large boulder that forms a roof. A hole behind this boulder allows you to easily scramble up the chimney. From this point, traverse out right to a large ledge below two huge grooves on west ridge. This is the start of P1.

Climbing up the hole/chimney allows you to avoid the original start as done by R. Robbins. To find this start, traverse out right before about 100 ft before the chimney to a broad ledge.

Standard rack. A few long slings are useful for setting belays as you can sling large rocks. 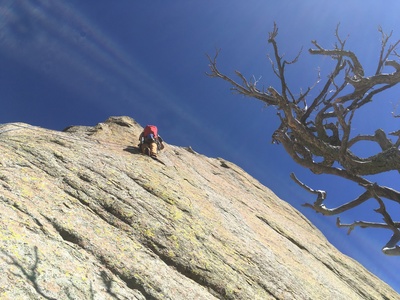 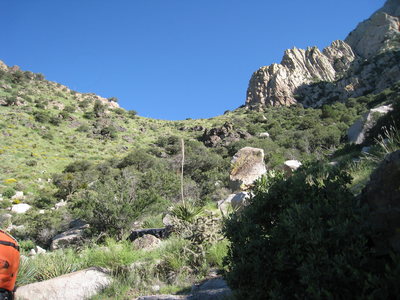 Ingraham's guide describes two saddles in his a… 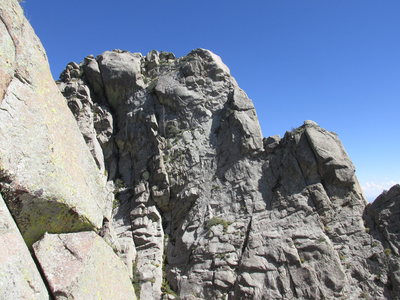 North face of the Wedge as seen from the West R… 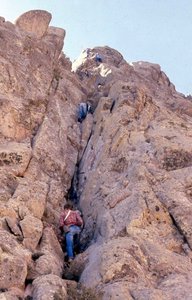 SWM climb on the West Ridge of the Wedge circa… 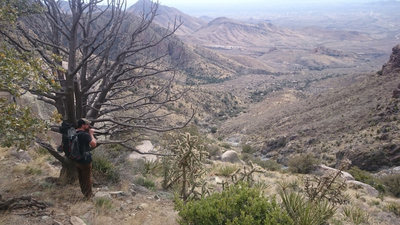 Looking back at the approach nearing the turn-o… 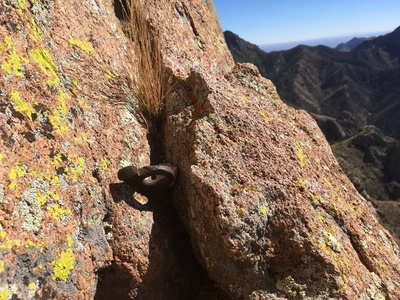 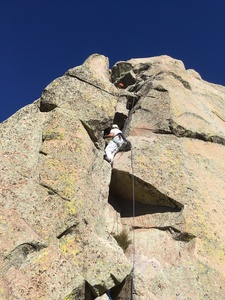 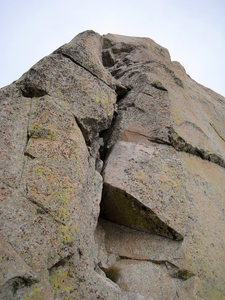 Pitch 4 of the West Ridge route on the Wedge 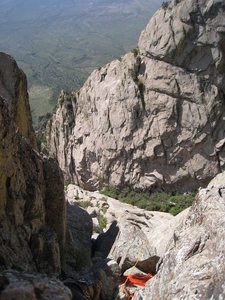 Looking down on P1 from the P2 belay. 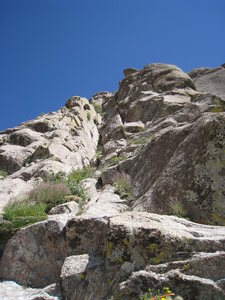 Looking up at P1 of the West Ridge. The leftmo… 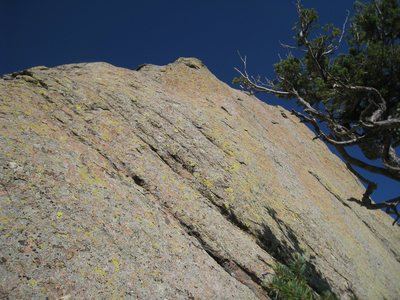 Looking up from the P2 belay. 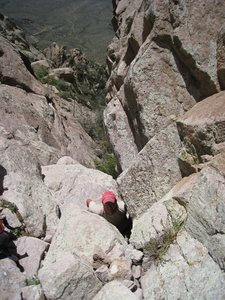 Zack coming out of the "birthing hole" at the t…

More About The West Ridge