Per JF M: as of May 2022, there is no signage on-site, nor information on the USFS webpage for the Cameron Peak Fire (nor on their published map of closures) that indicates the area is closed.

Per Bruce Hildenbrand: it appears that the Forest Service has closed access to all the climbing areas accessed via Storm Mountain Road (Monastery, Cedar Park, Combat Rock, etc.) until they can clear all the dangerous dead trees from the Cameron Peak fire.

It is confirmed by looking at Larimer County Land Information Locator (maps.larimer.org/lil/?xCent…)

Sylvan Dale Ranch confirmed that they do not want people climbing on their land for liability reasons and safety reasons - they have a horse trail above the cliffs on both sides of the canyon and expressed the worry of a climber topping out and spooking one of their horses while guests of the ranch are on a horse ride.

These climbs lie on private property, and are not open to the public. Please do not climb here.

I don't know who did the first ascent and if they gave it a name, but I think I saw it refered to as The White Dike in Tim Toula's Rock 'n' Road. If this is the right name, it's fitting since the route follows an obvious light-colored vertical band of gneiss from the river all the way to the top. This is probably the longest, most striking line in the Narrows.

I wish I could describe how to get there more accurately, but I'm in North Carolina at the moment, and I climbed it back in '98 or '99 (before even knowing if it had been climbed) so it's been a while. I do know, however, that it's not far before the tube when driving from Estes. It's located across the river, and we did a Tyrolean on a cable just downriver and scrambled across the opposite rocky bank to get to the base. On the way back, we decided the scramble and Tyrolean was too much trouble so we found a shallow spot and waded back across.

It's an enticing feature, a cool position, and the climbing's pretty good, but the rock is exceptionally loose. The dike itself seemed more solid but was difficult to protect, so we stuck to the left side of it. I lead the 2nd pitch which seemed looser than the first, and remember being constantly on my toes to avoid killing my belayer. At one point I put a TCU in a splitter crack only to realize it was behind a 6 foot detached flake just a tilt away from separating from the wall.

I'm giving this climb an R rating, both because of the loose rock and because if you were to climb the dike itself, which is safer than the left side, it's hard to protect.

I'm giving the route only one star because it's loose. Otherwise it's a really cool climb.

Eds. Please do not climb here. This is on private property. The landowner has confirmed that they do not want anyone climbing here.

Between the route and the Beige Siphon Tube is a long pullout on the river side of the road. There are two cables crossing the river here. Either clip a biner you don't mind ruining to the cable and do a Tyrolean traverse, or go a little bit upstream and find the shallowest spot to ford.

Right off the deck you'll find some long rusted bolts sticking out of the rock every few feet horizontally along the river (they probably used to hold electrical lines a long time ago). Sling one of these as your first piece (and back it up) and head up to the middle of the route where there's a decent stance and maybe even some old webbing and fixed gear (for the rappel). From here, head up to the top being extra careful not to knock any rocks onto your belayer. We used double 50 meter ropes and each pitch almost stretched them out.

I remember the first rap being a little sketchy. We found several slings either around a potentially loose boulder or an insecure-looking constriction. Rap back to the first belay, double checking the fixed gear or adding your own if need be, and rap back to the base. 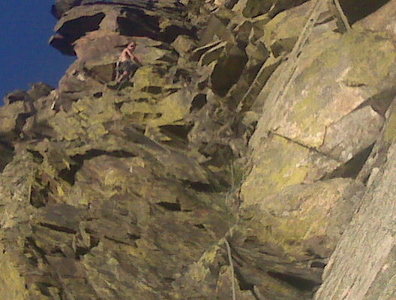 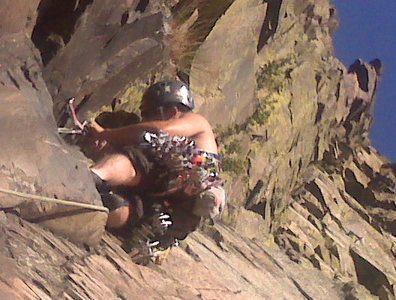 Scotty lookin' for a piece on the first pitch! 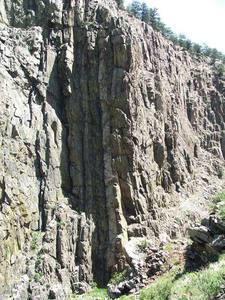 The White Dike-river out of view at bottom.

More About The White Dike