Routes in Hallett South Side

Chaos Couloir is the beautiful snow gully that curves from Chaos Canyon up Hallett's east ridge. Perhaps it already has a different name, but I only know a few people who've been up there and have never heard it refered to by a name. It's a moderate snow climb much like Dragon's Tail, but not as steep at the top, and a good ski descent.

The first couple times I went up there, I accessed it from the couloir that goes up Hallett from the south side of Emerald Lake, which spits you onto the east ridge and makes it a bit of a mixed climb. From the top, scramble around the south side of the ridge staying just below the cliffs. You won't see the couloir until you're almost upon it. This drops you off at the upper half of Chaos Couloir. I initially took this route thinking it would be quicker than negotiating boulder-strewn Chaos Canyon, but after the Park gets a decent amount of snow it's faster and more straightforward to go up the canyon. It does make for a fun variation, however.

To get there from Chaos Canyon, take the Lake Haiyaha trail from Dream Lake. This may not be as easy as it sounds since, for me last May, it involved steeper and icier slopes than the couloir itself (literally), and which, for a friend who tried to head up there to do some bouldering a week later (in May!?), involved some thigh-deep post-holing. Because of this, it might actually be quicker and easier to take the "unimproved" trail which starts near the junction of the Mills Lake and The Loch trails. Once you get into Chaos Canyon, take the path of least resistance (starting from the left side of Lake Haiyaha) to the base of the route, which becomes obvious as you go further up the canyon. This approach allows you to do the entire couloir from the bottom up, although the upper half is steeper and more interesting.

However you start the route, once you top out, you can either downclimb (or ski if you brought 'em) or continue up the broad rocky ridge to the summit, which requires one more short climb up the summit snowfield. The easiest descent from here is down the Flattop trail, but Tyndall Gorge would be a more fun option.

It's a good route to solo, but if you want to protect it, bring either pickets or a light rock rack for the sides of the couloir. 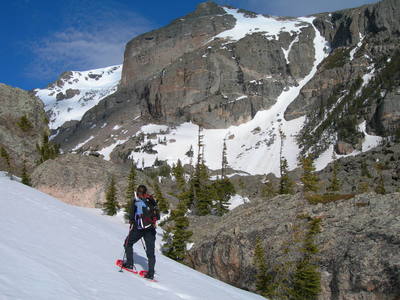 Nancy Bell stops to look at Chaos Couloir on he… 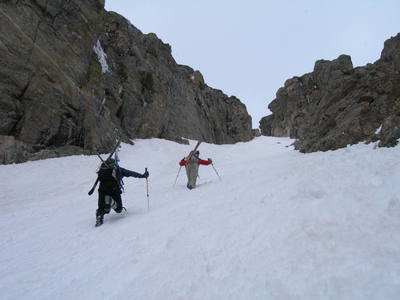 A couple of skiers head up Chaos Couloir. 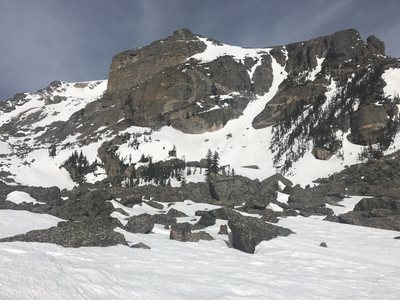 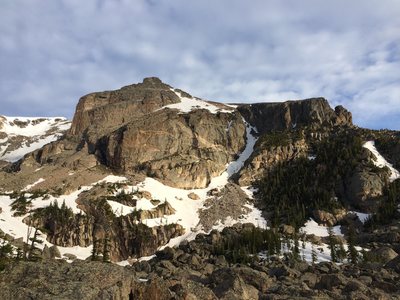 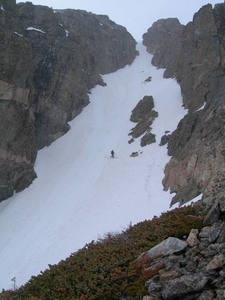 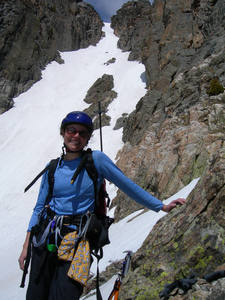 Nancy Bell with the top half of Chaos Couloir i… 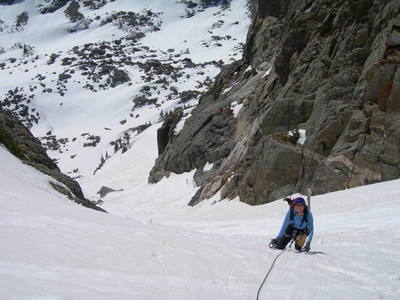