The Mount Nebo Wilderness boundary parallels approximately 100-200 yards south of the Santaquin Canyon road from the mouth of the canyon to Tinney Flat Campground. Wilderness rules blm.gov/wo/st/en/info/regul… apply within the wilderness area (nothing mechanized or motorized allowed, including power drills).

Usually done in two pitches. The first pitch is a steep curtain of ice about 40 feet tall. In poor conditions there is a bolt ladder on the left to bypass the first curtain. The 10 bolt ladder is a route called Martini (A0, M8-9).

P1 (WI4): Usually lots of water running down the first curtain and lots of air pockets. Hopefully good screw placements can be found. Pull over the top to low angle climbing for 30 feet, then walk up a short distance to a scramble to chain anchors on the left.

P2 (WI3): Another exciting pitch. Climb the narrow formation for 50 feet to a low angle chute. Chain anchors are up the chute on the left.

Rappel the route, or continue on to Backoff. To get to Backoff, scramble up the rock/snow above Squash Head's top anchors to the top of the ridge to rappel chains. Rap down the other side of the ridge using a single 60m rope to reach the bottom of Backoff.

Name History: Squash Head was an indian chief that saved the lives of local settlers when he heard of an impending indian raid. Squash Head warned the settlers and told them to leave or they would be killed. After the incident the settlers wanted to name the town after him. Squash Head instead asked that the town be named after his son Santaquin.

Pro: Bring long ice screws for the first curtain. Shorter screws may be needed over the top.
Rope: 60m (1 rappel to Backoff, or three rappels back down Squash Head)
Anchors: chains

Under the right conditions avalanches can rip down this gully. 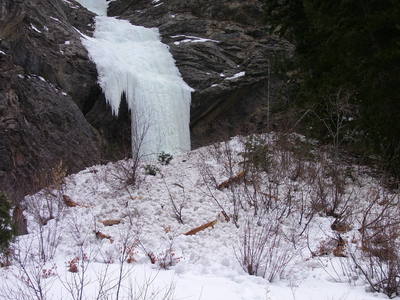 Avalanche debris at base of Squash Head (Jan. 07') 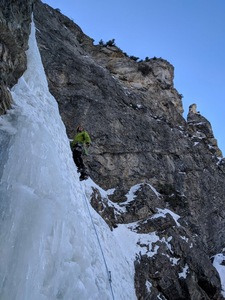 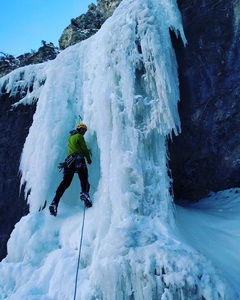 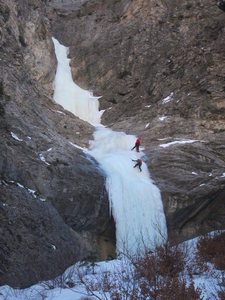 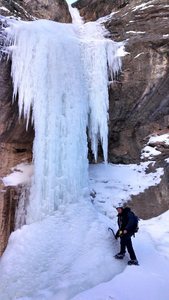 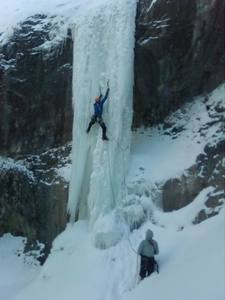 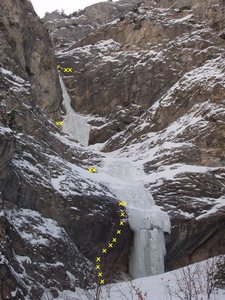 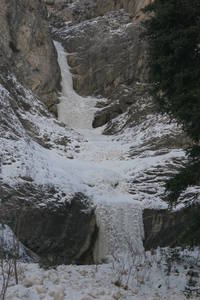 Squash Head from the road