Routes in The Whale

Bony Fingers features an incredible 90m finger crack! If it weren't for the knobs, this steep, beautiful splitter would be 5.12 instead of 5.9.

Located on "The Whale", approach by turning off of the main road to the north onto a dirt road opposite the group campground. This can only be followed for about 100 feet to a gate. Park here. Hike past the gate towards the east until the road makes a sharp switchback up and left (back to the west), and a secondary, lower, road continues east (this is actually the trail). Follow this sandy/gravely path for a good 10-15 minutes until reaching an obvious swath of large, white talus. This talus field leads up to The Whale, which does indeed look like the head of a breaching whale. The route is on the left-hand margin of the formation, and the crack is difficult to make out from the trail itself, but no more than two minutes up the talus it becomes apparent just right of a brown water streak.

P1: The original first pitch heads up past a modern bolt, then right and up to another modern bolt (and an old relic), then straight left to the start of the crack. This looks pretty bad in terms of both rope drag and protection for both leader and follower, but supposedly goes at 10c. Alternatively, climb straight up to the finger crack via three modern bolts on 5.11b face/slab - the climbing is actually quite good! There is a 5.8 move to reach the crack that would likely result in a groundfall, but the very tall can slot a wire in for toprope pro before this move; at 5'10" I girth-hitched two wires together to extend my reach and was barely able to slot a wire in overhead. This section may be R for anyone shorter than that, but a tiny RP or the smallest, blue BallNut might provide pro before the crucial placement. Once in the crack, pro improves. Climb up via knobs and thin jams to an obvious belay stance on a large, black knob that is split by the crack.

P2: A 70m rope is required. Follow the immaculate splitter up and around the arete to a bolted anchor. Shorter ropes will require an intermediate belay or simul-climbing. 5.9.

If you don't want to carry two ropes on the climb, fix one end of the rope, send one person down over the left-hand shoulder of the formation on a single strand, have that person fetch the second rope and tie it to the rap line so the second can pull it up and then do a standard double-rope rap. Alternatively, if you have an 80m rope, you can rappel down and swing over to the intermediate anchor on Killer Whale, then do a second rappel to the ground. This would eliminate the need to bring two ropes, but bring a pair of quicklinks and 'biners to equip Killer Whale's anchor.

Lots of wires and small cams up to 0.5 Camalot. A single 0.75 and #1 Camalot is all you need at the big end of things. A 70m lead line and a second rope for rapping (or a single 80m and a couple quicklinks and 'biners). A two-foot stick-clip to slot a wire in at the start of the crack might be a good idea unless you're very tall. 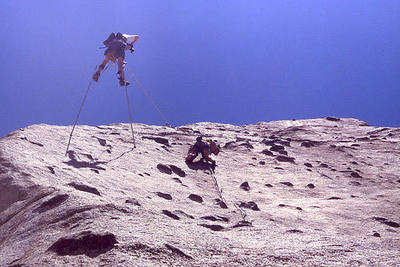 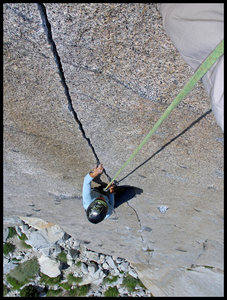 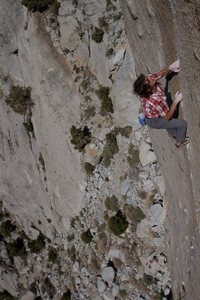 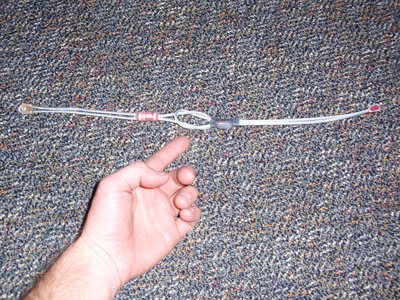 Use a set-up like this to reach the constrictio… 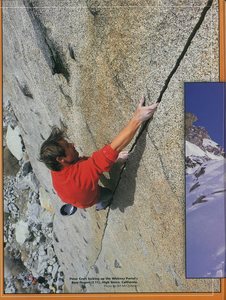 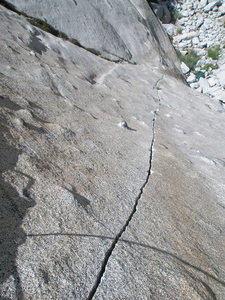 View from belay to base. A great vantage point… 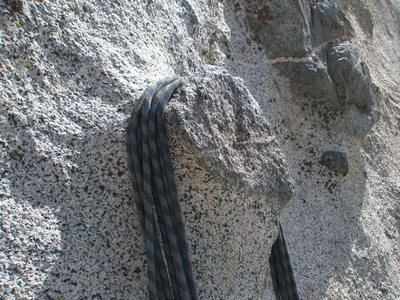 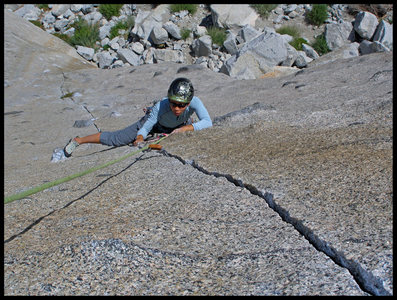 Angelina following P1 of Bony Fingers. What an… 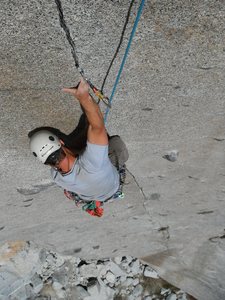 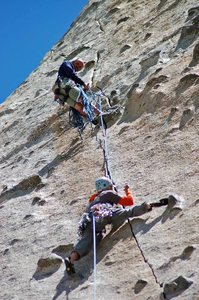 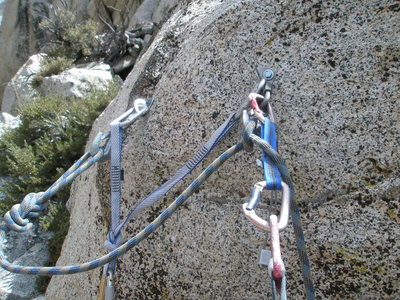