This climb is also on the south side of King (to the right of the off-width/dihedral), but is much, much more difficult. The descent is over the overhanging portion of King Rocks prominent southern prow, causing a definite risk to ones rope. While being lowered, once past the overhang, one has to pull oneself inward to the rock so one is not out in space. The climb itself, however, is very aesthetic. The rock looks almost black  from what, I cannot tell  and is slippery and not nearly as heavily featured as the Sioux quartz Im used to seeing. Once past the overhang is a series of passable hand and foot ledges which get blockier as one ascends.

South side of King Rock (to the right of the off-width/dihedral).

Top-rope only. Right over the water. 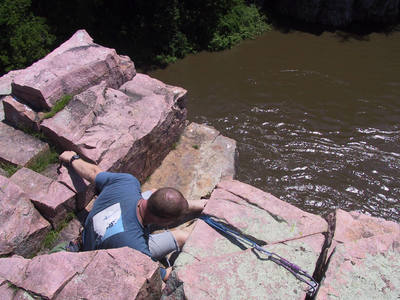 Go down from here.