Royal Arches is considered by many to be one of Yosemite's all-time classics. Commonly done at 5.7 A0 with a point of aid off a fixed line, the route is easily freed at 5.10-. While the route weaves its way up an impressive band of rock at a relatively easy grade, there are other moderate climbs of superior aesthetic quality, but perhaps it earns it's classic status due to the history behind the climb, first negotiated in 1936, or the easy approach combined with an accessible grade, or the simple fact that it serves as the most effective approach to North Dome that makes the climb so popular... don't expect to be alone on this route.

Approach Royal Arches from the Ahwahnee parking lot. The most heavily traveled trail, well right of Serenity Crack, is likely to be the correct trail. The start of the climb is in a chimney in the back of a huge left-facing corner. The highlights: Climb up the chimney past a chockstone (5.6). Make a long 3rd class traverse on ledges to the right. Climb a steep, polished ramp/groove (5.5). Once again, traverse right on 3rd and 4th class ground -- do not be tempted to start climbing up the face or corners, continue right as far as possible. Eventually head up on a 5.7 finger crack. At this point, follow the chalk and clean rock up various crack and ledge systems for several pitches, eventually ending up in a left-facing corner system. At the top of this corner system there is a bolted anchor on the face from which a 30' length of fixed line is attached. Clip this for pro, and either pendulum left or climb left (two moves of polished 5.10-) to a ledge system. Follow this way to the left. Climb up either side of a giant hollow flake, then step left to some tree climbing to a belay alcove. Step around a corner to the left and continue up on low angle 5.6-5.7 terrain. Just below the headwall and roof systems, continue traversing left following the line of least resistance. One pitch climbs through some dirt mounds. Shortly after there is another traversing pitch with a two bolt anchor -- make note of this if you plan to rappel. One more traversing pitch finishes the climb -- this one can feel a bit sketchy compared to the rest of the climb. Traverse high for gear in a dirty undercling, or traverse low to clip a lone bolt. Either way beware of pine needles on the slab. This pitch is strange in that it seamlessly merges into an actual trail into the woods... kinda cool.

*Topping out involves following the trail left and then up.

*Right where the climb ends there is a great spring with water that is safe to drink -- you can't miss it.

*Sleep in! There are numerous places on the climb to pass or be passed.

*The rappel route is fast and effective and can be done with one or two ropes. I highly recommend consulting with the SuperTopo guide for specific details on the locations of the rap stations.

*The walkoff is via the North Dome Gully. For parties only doing Royal Arches (and not doing another climb on North Dome), the raps are the way to go. For parties continuing on to North Dome (or for climbs on the Washington Column), the Gully would be much faster.

The start of the climb is in a chimney in the back of a huge left-facing corner.

1. 5.6 100' Climb up the polished chimney past a chockstone to an awkward move up and over a small bulge to a belay stance.

Pick up your ropes and scramble up along the groove until a short steep wall is reached.

2. 5.6 120' Climb the slabby terraced face until a steep move gains a left facing groove. Follow this up to the belay. This pitch is the first of many where pins scars are very evident.

3. 4th 160' A long wandering pitch of easy climbing and scrambling. Belay at the tree to the right of a polished groove.

4. 4th 80' Move left from the belay and start up a wide groove. Move right half way up and move up to the belay at the top of the groove.

Pick up your ropes and move the belay 160' to the base of a pin scarred crack. Now the climbing becomes more sustained and certainly more enjoyable.

5. 5.7 130' Start up the polished pins scared crack with a couple of good finger locks. At the top of the cracks move right then back left up towards a good belay ledge. Make sure you belay on the left end of the ledge.

6. 5.7 160' Move up left from the belay but quickly move back right and continue up perfect cracks and liebacks. This is a great pitch.

7. 5.5 100' Continue up the steep steps until possible to move right towards an obvious off width crack. Belay at the base of the crack.

8. 5.6 120' Climb up the off width. At the end of the off width move directly up the obvious flakes to the large ledge with a tree. The large hollow sounding flake near the top can be disconcerting so plan accordingly.

Note: It is possible to link pitches 7 and 8 with a 60m ropes and good rope management.

9. 5.7 or 5.10b 125' The pendulum pitch! Climb up the chimney and then step right up a crack system. Move back left into the groove and place high gear up right. You now have a choice, traverse the slab leftwards free at 5.10b, or grab the fixed rope and pendulum across. Either way it is fun. Belay on the flake at the end of the traverse.

11. 5.7 100' This pitch is relatively short, but feels sustained. Start directly above the belay and head up a pleasant crack system. Continue up leftwards into the corner with good face moves before an awkward section allows a tree and belay to be reached.

12. 5.7 110' From the belay make an awkward move left around the arete and then climb directly up the steep hand crack. At the top of the crack make a couple of extra moves on the face to gain a good belay below a shallow groove.

13. 5.6 130' Looks can be deceiving and this pitch is true to the saying. Climb the easy angled grooves to a good belay stance at a large pine tree.

14. 5.4 150' Steep down from the belay and make a delicate traverse leftwards. As the end of the traverse approaches move up to the right of the tree. Continue up and left to belay on the blunt arete.

15. 5.3 150' Delicate slabby climbing up and left eventually will lead to the triple bolt rappel station at the top of the slab.

16. 5.4 170' Move left and then down towards the bottom of the slab. Gear can be found at the lowest point of this traverse. Step up left onto the slab proper and climb the solitary bolt. Now make the crux moves across the slab. Stay low and traverse leftwards towards the pine needles. The traverse gets easier the farther you are form the bolt. It is only 5.4, but it comes at the end of the climb and offers maximum exposure.

Note: Due to the position of the bolt seconding this pitch is scarier than leading.

17. 5.4 170' (optional) If you want to make the rappel descent you must now reverse the last pitch (16) to return to the rappel station. This time the leader has the harder time! 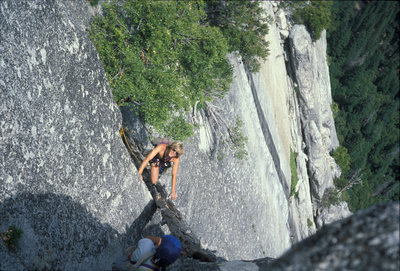 Back in the day...when the "rotten log" was in… 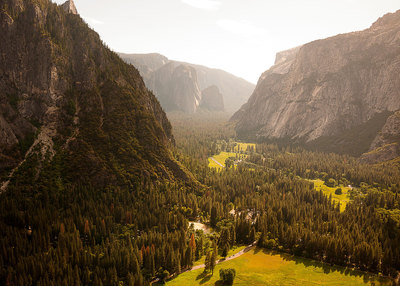 Looking down valley from Arches. 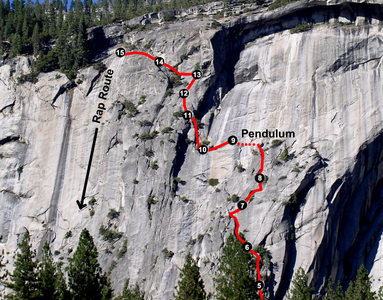 Topo showing pitches 5 through 15 of the Royal… 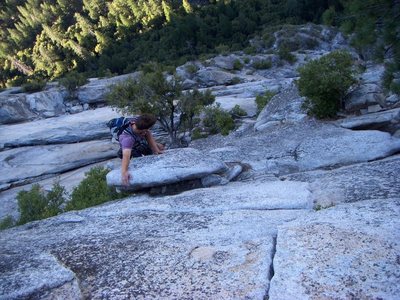 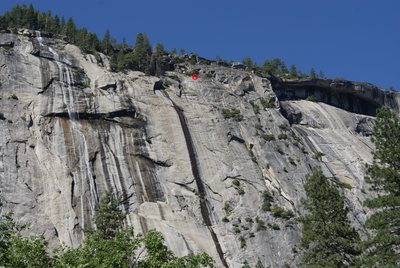 This shows the scale of the climb. Inside the… 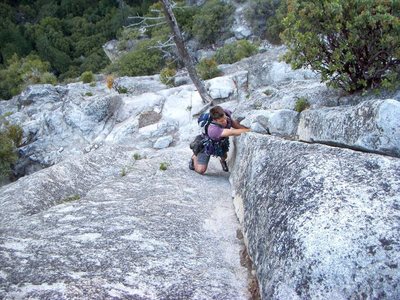 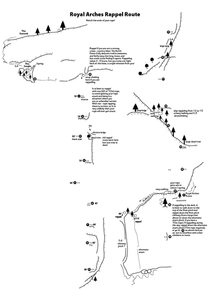 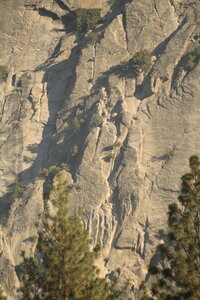 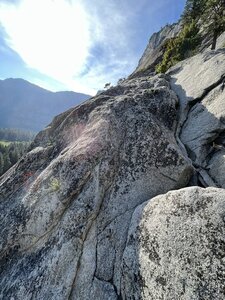 This is a photo of the 13th rap station that is… 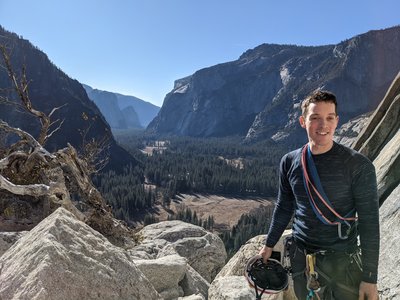 Glad to be on Pebble Beach after leading the pi…