The Steck-Salathe truly deserves its status as one of the "Fifty Classic Climbs of North America". Everything from the climbing itself to the many stories of adventure had on the north face of the Sentinel makes this climb a must-do for any aspiring Valley climber -- if not a route to be repeated again and again, it certainly should at least be seen as a rite of passage. The climb's reputation for being long, wide, and physical is well deserved, but the quality of that climbing, the position one achieves, and the overall sense of adventure the route offers should not be understated.

On the first ascent in 1950 Allen Steck and John Salathe reached the top of the Flying Buttress (the first half of the route) in two days, and took another three to reach the summit (Royal Robbins made the second and third ascents a few years later). Today the route is commonly done by free-soloists in the lesser part of a morning; but this is also the climb that nearly resulted in the deaths of Dean Potter and Timmy O'Neill (a fantastic account of their antics appeared in one of the climbing mags a few years back), and did take the life of beloved Derek Hersey. Most parties should expect a very full day even with a first light start, but fast parties could certainly make it down for dinner if they move efficiently and link pitches. Originally rated 5.9, the route has been upgraded to 5.10b which is much more like it. Nevertheless, the 5.10 sections aren't too bad -- it's all those 5.8 and 5.9 wide pitches that present the true crux of the route. There are many ways to pitch out this climb; this description describes my experience on it.

Approach by parking at the Four Mile Trailhead. Follow this trail for a long half-mile to a point on the trail where a narrow, tree-shrouded talus slope heads up into the woods. This is sometimes marked by a cairn, but it is fairly easy to find: if in doubt, continue east on the main trail for a minute or two to an obvious stream bed (sometimes dry late in the season) and then backtrack 100-200 feet to the talus. Head up a well-defined climber's trail in the talus until it eventually dead-ends at the base of the Sentinel at a steep, wide, west-trending ramp. This is a convenient place to rack up and stash the packs. Follow this ramp up until it eventually turns into a narrow system of catwalk-like ledges that weave back and forth up the north face of the Sentinel. This amazing passage (reminiscent of the approach to Hobbit Book in Tuolumne) gains about 1/3 of the height of the Sentinel via simple 3rd and 4th class scrambling. It's hard to get lost on this ramp system, and eventually it opens up to a small, loose area near the western edge of the face. Continue scrambling up until you reach the base of a significant right-facing corner with, yes, a wide crack. This is the start of the route -- you can't scramble any higher.

P1: A 60' right-facing corner with a wide crack in it. This can be negotiated with squeezing and OW skills, but I found it easier to lieback. 5.8, strenuous. I was glad to have a #4.5 Camalot (#5 C4). This leads to a belay stance which I skipped. Step right and continue up some 5.8 cracks to another stance and belay -- a long pitch.

P2: Climb a touch more 5.8 past some fixed gear, then easier terrain, then a brief finger crack, then wandering climbing up a gully system to some final wide cracks and a belay below the base of the Wilson Overhang. Another long pitch, 5.8.

P3: The Wilson Overhang. Climb up an ever-steepening chimney/corner system with a difficult to reach hand crack in the back. Eventually one must commit to either jamming and squeezing awkwardly or stemming out a ways with little pro. There are good face holds for doing the latter. Pull the overhang and climb easier ground up to a belay on a pedestal. This pitch is accurately rated 5.10a but is not the crux of the climb.

P4: Climb up an absolutely horrendous 5.9 squeeze and then traverse right and up to a belay at the base of a huge gully/chute system. Alternatively (highly recommended), skip the squeeze in favor of an unprotected 5.8 flake out right. The squeeze may very well be the crux of the route -- UGH.

P5 & P6: Climb one of many crack systems for the next two pitches up the gully/chute until it is possible to tunnel through the tip of the Flying Buttress to the left. This is a good area to simulclimb or pass other parties as there are many avenues. 5.8-5.10 depending on how you go. Belay at a rap station on the east side of the Flying Buttress -- this is the halfway point and after this retreat becomes more difficult. Do a short (40') rap off the anchor to another anchor at the base of a steep crack system. I guess you can also downclimb this section? Looked difficult.

P7: Ascend the steep and difficult crack system up to an obvious belay -- this is an interesting and challenging pitch. 5.9.

P8: Face climb up and right, then wander sharply back left and up to a belay below a long corner/slot that leads up into The Narrows. There are several fixed pieces protecting this pitch, but small/medium wires work well too. 5.9 and a somewhat heady change of pace from all the thrutching thus far. Don't worry -- its all thrutching the rest of the way from here.

P9: This corner to flare to chimney is rated 5.10b which would lead one to believe its the crux of the climb, but it goes quite well, especially if you're willing to leave the security of the gear in the corner and stem and chimney your way up it a little to the outside. The pitch links very easily into the next pitch, the Narrows, and this is what we did.

P10: The Narrows. If you skipped the 5.9 squeeze after the Wilson Overhang in favor of the 5.8 flake, then this is the unquestionable crux of the route. The Narrows was originally climbed by aiding up a bolt ladder on the outside of the slot, but ever since Robbins' ascents, the way to go has been right up into that hole. Approaching it, unlike Astroman's Harding Slot, is relatively easy. In fact, you can get most of your upper body into the Narrows while your lower body is still comfortably back-footing in the wider chimney below. The problem is advancing the next yard or so: One must drop one's feet and figure out some way to make upwards progress in a squeeze chimney using only body parts from the hips up. I managed this by using the back of my head on the back wall to pull my body upwards while simultaneously exhaling, then taking a deep breath to hold that position while I groped for a higher purchase with the back of my head. Hey, it worked. Gear for inside The Narrows really isn't necessary, but a fist-size cam (#3.5 Camalot/#4 C4) works well to protect the initial moves. For most of this you feel pretty alone with only the sound of your own gasping, and the tinkling sound of the hangers on the old aid bolts blowing freely in the wind on the outside of the slot, for company. Perhaps you'll wish you were out there hanging from those bolts, but perservere -- eventually things will start going a little more quickly. At last you can stem up out of The Narrows to an incredibly exposed position high on the upper face of the Sentinel. Peer down at the old bolt ladder, and the valley floor two thousand feet below. A few more feet of easy climbing leads to a nice belay. 5.9? Yeah, sure.

P11: At this point a stout looking pine tree appears way above. This actually is the location of the final real belay on the climb. Not much further, huh? Continue up a fun 5.7 chimney to a very cool belay at bolts on top of a chockstone.

P12: Continue up the chimney until forced to pull out left through a steep section at a hangerless bolt (plenty of gear to back it up). Belay where convenient. 5.8.

P13: Aim for the tree. Head up and left through a very steep, but short, section of hand or fist cracks (switching between them where necessary). Some of this rock is fairly low quality, but after one last little mantle into the dirt and pine needles, you can taste victory. Belay at the big tree.

P14: An easy pitch continues up the east-trending ramp at low 5th class, then steps around the corner and belays just below the summit.

Descent: Before attempting this descent for the first time, take into account the amount of daylight you have remaining. If it's dark already, consider waiting it out and beginning at first light. You should try to do at least the first two thirds of the descent in the daylight. Part 1: Follow a passage east through manzanita and boulders until it turns into a huge gully that heads down to the east. Follow the obvious trail along the southern (right) wall of this gully until it eventually begins switching back down the center. This gully is often loose and very steep at times and requires much care to follow the trail, which is the easiest path. At one point a rappel is reached, but this is not necessary -- there is a 4th/low-5th passage down just before reaching the rap, but it appears improbable from above. Eventually you will reach a stream which must be crossed. Note: This stream is the one that crosses the Four Mile Trail just after the talus on the approach; it is also visible (as water streaks/wet sections of rock) from Camp 4 when looking up at the valley wall just left (east) of the Sentinel. The stream is spring-fed and safe to drink from -- a good thing to know when planning for how much water to carry on the climb. Part 2: After crossing the stream, begin heading north (left) on steep slabs. You want to stay in the middle of the slab or western 1/2 of it (near the Sentinel). The base of the slabs terminate in dense trees. Part 3: Continue scrambling down and east (right) along the base of the slabs to a non-descript point at which you enter the trees. Find the path of least resistance -- expect some bushwhacking. You can more or less head north and west to reach the climber's trail and the Four Mile Trail, but if you left equipment at the base of the ramp, you'll have to cut sharply back west to reach that point. 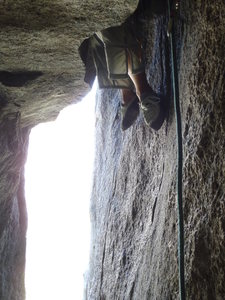 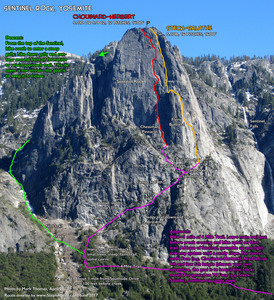 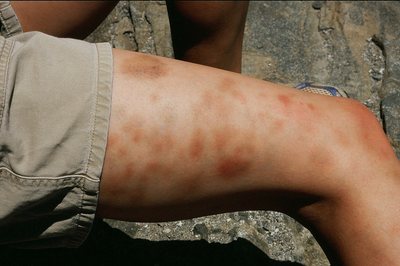 Leg bruises on an anonymous MP.com friend after… 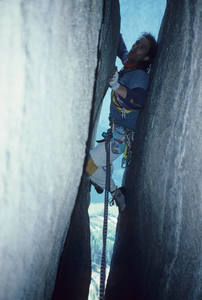 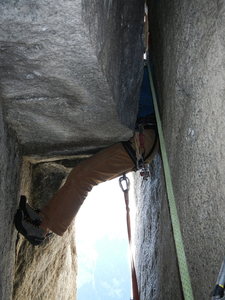 This is where things get interesting. Tom past… 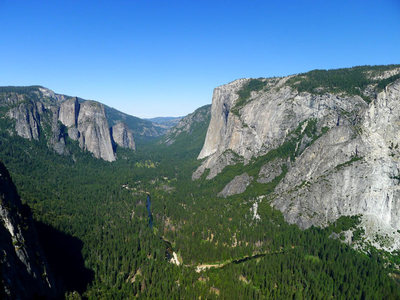 El Cap from the Sentinel

Last pitch before summit: you made it 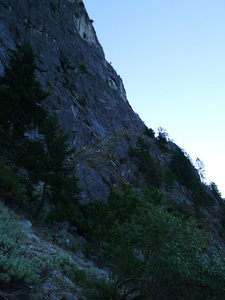 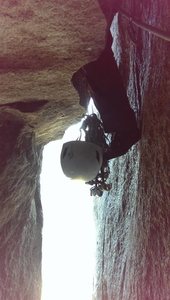 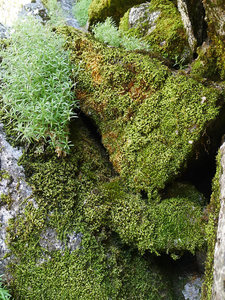 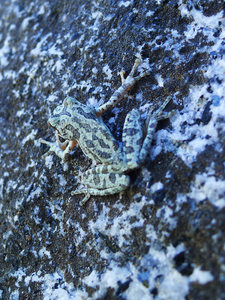 resident route frog (one of several we saw) 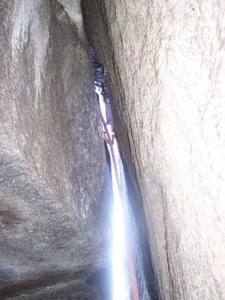 The Narrows, taken from the belay ledge at the…