This pitch was a temporary remedy for the chronic itch of finding new routes, as well as, the situation with the abandoned, old timey glued holds on the steep face right of the route. A very nice line with two distinct cruxes. Start on scruffy rock to reach the first bolt, then out onto the main face. The first crux comes at the third bolt and is a mix of sidepulls and deadpoints.

At the middle of the route soak up the rest as the top half is quite steep by WI standards. Climb jugs on the arete past two bolts. The third bolt on the arete is a hard clip and right at the begining of the second crux. Cranking on some small holds and divots will set you up for the throw to distant jugs. Enjoy the easier climbing to the top.

When you are lowering off take a look at the rediculous botch job to the right. Four ugly glued holds were abandoned by their creator. Probably out of self loathing. One of these holds is close by at the crux, though I didn't use it on the FA. These holds are a good example of what not to do when developing routes. There isn't even a line where they are at. It’s just too stupid. Anyhoo, I ripped the one bolt that was over there, and whoever is responsible for this mess should be ashamed of themselves.

Middle of the north wall. 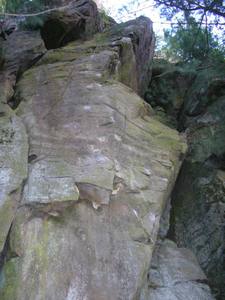 Remedy. Photo doesn't do it justice. I will g… 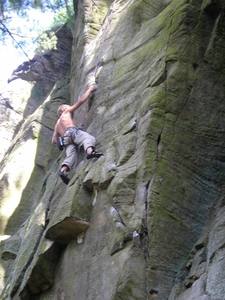 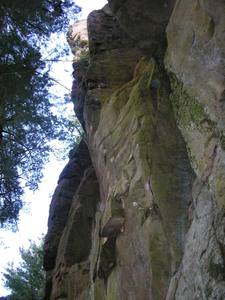 Side view of remedy