The Serendipity Arete, approximately the west ridge of Mt Owen, is much better characterized as a mountain adventure rather than a rock climb. Most people will probably find the approach and descent more demanding than the climb itself. The climbing generally consists of short, steep sections with lots of scrambling in between. Retreat from the route would probably entail much downclimbing.

Approach: Cross Jenny Lake somehow, then walk up the Cascade Canyon trail for about three miles, until past the Valhalla streambed. Ford the river (< 12" deep in late August) and head steeply up the west side of the Valhalla streambed. If you're lucky, you'll find a pronounced trail; otherwise you'll probably follow intermittent trails. Either will get you to the lower reaches of VC where the trail ends and the slope eases off.

Note: We were able to find water in the middle part of VC (while still in the basin, before scrambling up onto the slopes of Owen itself) late in the season. We didn't see any convenient water source above this.

The crux of Serendipity is probably finding the start. We lost a lot of time by convincing ourselves that the route started lower than it did which resulted in a lot of completely unnecessary scrambling. The key to avoiding this mistake is to identify a large, very prominent, orangey left-facing corner with a square roof at the bottom of its right side. Identify this corner from the basin and then accept the fact that the route starts about a pitch below the large corner, surprisingly far above you. A secondary landmark is a long, shallow black roof below and slightly right of the large corner; this feature is passed to its left about 25M into the first pitch. From the middle of the basin, don't beeline for the corner. Instead, continue up VC, toward the Grand, until almost the end of the canyon. Now go left/E, up scree towards the Gunsight, gaining several hundred feet. At some point, trusting your instincts and judgement, cut left/north when it seems like you could traverse more or less horizontally to a point about 25M below the long black roof. Eventually, you'll encounter a descending slab below a roof/cave which will take you to a small, stamped out area at the base of a 5M right facing corner. This is the start. Getting to the start from west side of Jenny Lake took us almost seven hours. A quick party should probably allocate at least five hours without mistakes.

P1. Go straight up for a ways, passing the long, black roof on its left, then traverse right on slabs, eventually encountering some FPs. Try to traverse all the way around the arete, to a good stance at the base of a chimney. ~5.7, 75M. (To break this pitch up, find an intermediate belay before the traverse, maybe on a pedestal left of the black roof.)

P2. Go up the chimney, probably using a slippery hand crack, then continue up, trending left, on easier ground to the base of a slab with a 5" crack on its left side. ~5.7, 50M.

P4. Walk across the "knife edge" (it's a pretty blunt edge), climb a couple of moves up a block, then diagonal down right for about 10M and belay beneath broken, black rock. Easy, 30M

Note: this area around the notch btw the 3rd & 4th ledges offers the best bivy spots on the route.

P7. Pass through the notch to left/NW side of the 4th Tower, then descend a ramp for a little ways until the rock above you looks climbable. 4th class, 20M.

P8. Climb up for most of a rope until you reach easier ground. ~5.7 50M. Rossiter indicated this section was easier so maybe we were off route.

P9. Wander up, aiming for the right side of the ridge. Keep going, past the 4th tower, until a notch btw the 4th tower and the next difficult section. 4th class 60M.

P10. Up past a warm up chimney type move to the base of a short, smooth, bulging 7" crack. Either free climb this (allegedly 5.9) or aid up a thin crack just to its right (FP, red or green RP probably helpful) for a move or two. Continue up easily until beneath the summit block. 5.7 C1 50M.

P11. Scramble rightwards until at the base of the Koven chimney, a passage which goes all the way through the summit block. 4th class 50M.

Unrope, and scramble up the chimney the remaining 100 feet to the summit.

Descent: I can't speak entirely from personal experience since we kept going to the Grand, but the best bet seems to be descending the West Ledges back into Valhalla Canyon. The general idea here is, starting from the base of the Koven chimney descend the east side of ridge running from Owen to the Gunsight (possibly 1 rap) until the obvious "U notch" where you crossover to the west and descend with a fair amount of downclimbing into Valhalla Canyon.

We took: 1 ea 1-8 Rocks, 1 ea green Alien through Blue Camalot, 1 ea 4 smallest Tricams, several long slings and biners. Rossiter recommends a 4" piece but we didn't see where it could be used. Something smaller than a #1 Rock would have been useful for the aid move at the chimney. 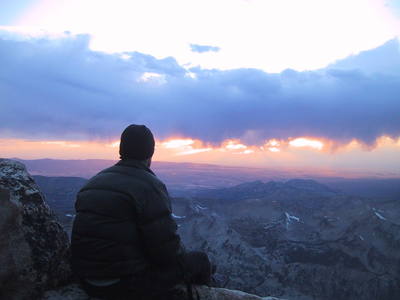 Sunset over Idaho from the third tower. 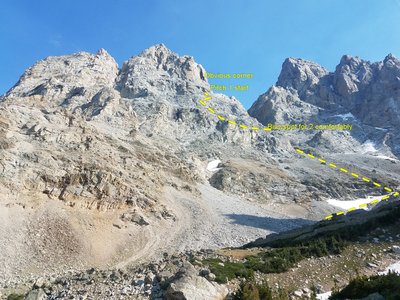 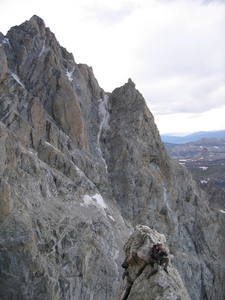 The 3rd belay, on top of the first tower. Encl… 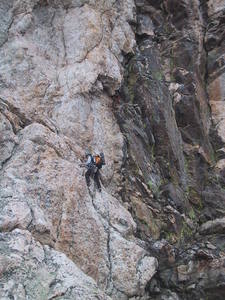 DM near the end of the downclimb on P4. 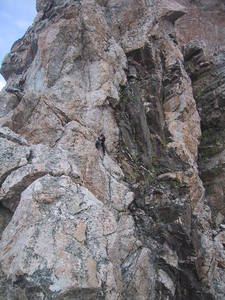 Dougald MacDonald, on the fourth pitch, above t… 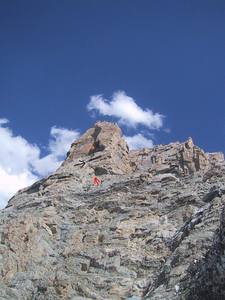 Locator photo. This photo is foreshortened and… 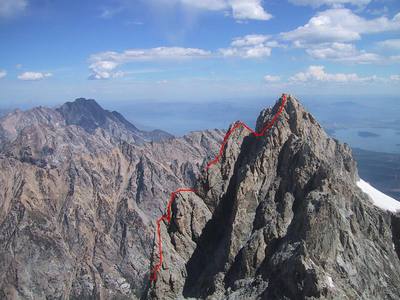 The Serendipity Arete from the north side of th… 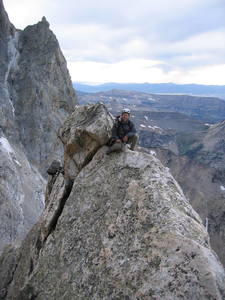 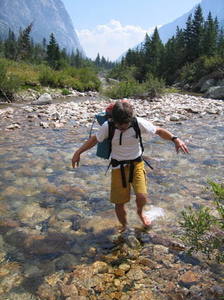 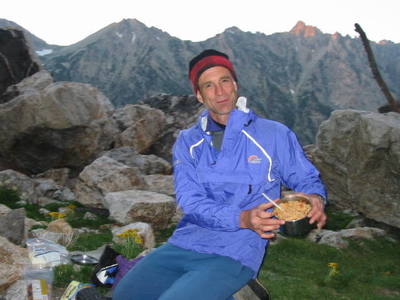 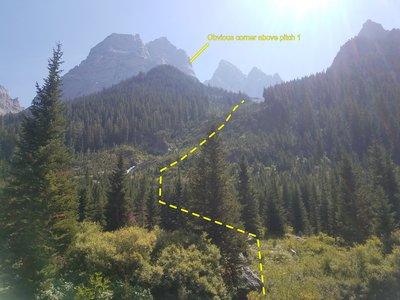 Approach from creek crossing up to Valhalla canyon