This addition to the Second Buttress on Hallett combines a few old pitches with some new ones to create a striking line up this classic alpine rock face.

The 110' long second pitch is the crux as it ascends increasingly steeper, striped rock to a 5-bolt protected, pumpy section on the left side of the striking arete just 50' right of the classic Culp-Bossier. These are the only bolts on the route, not including the two originals encountered on the last pitch that is the finish of the Jackson-Johnson.

P1- 5.9 (20m) Climb the initially steep dihedral past some grassy sections then into a short offwidth corner which can be laybacked then from the first grassy ledges, traverse right to a 10' long splitter 0.75" crack which makes for a nice belay- the horn above has a sling on it as well. There is a green double sling as of 5/16/12.

P2 - 5.11 (35m) Climb straight up from the belay, past some loose rock into a wide section under a ceiling which is bypassed on the right by a quartz handrack. Follow this narrowing fissure to the end then left 10' and past a lost arrow which protects balancey moves up right onto the face and the first of 5 bolts through the crux climbing. Two 0.3 cams protect the slabby finish to the bolted anchors (60m rappel to the ground).

P3 - 5.7 (50m) Climb straight up from the anchor past a thin pin and then easier ground to intersect with the Jackson for a few feet, then continue straight up into a wide groove where the Jackson goes right.

P 5- 5.10a (55m) Traverse left out of the belay on loose rock to an arching, right-facing corner. Pull the roof into the corner and follow this up then head straight out of the top of this crack where it arches right then 15m up to the start of the 61 meter ramp (This is probably P6 on the "Dark Side" route- Rossiter guide).

P7 - 5.9+ (60m) Climb a steep quartz crack out of the ramp end then back left into an obvious right-facing dihedral which is the Jackson-Johnson finish with two ancient bolts.

This route starts just right of the Culp-Bossier, in the second small dihedral to the right (about 50') of the CB start, which is the same as for the Love, Englishman's, and Jackson-Johnson routes, also. The second pitch climbs on the east aspect of an obvious and striking prow with the belay ledge right on top of the prow. The direct start to the JJ starts in the major dihedral system 100' to the west of this prow. Recommended descent is down the east ridge to the rappels. No fixed anchors other than the 2nd pitch are available, so retreat could be a costly endeavor.

A standard rack to #3 Camalot, doubles of all sizes down to a 0.25 Camalot and extra shoulder length and double-shoulder-length slings are helpful. Five bolts and two pins protect the crux second pitch which ends at a nice ledge on a prow- this is the only pitch with new fixed hardware other than one pin on the start of the third pitch. 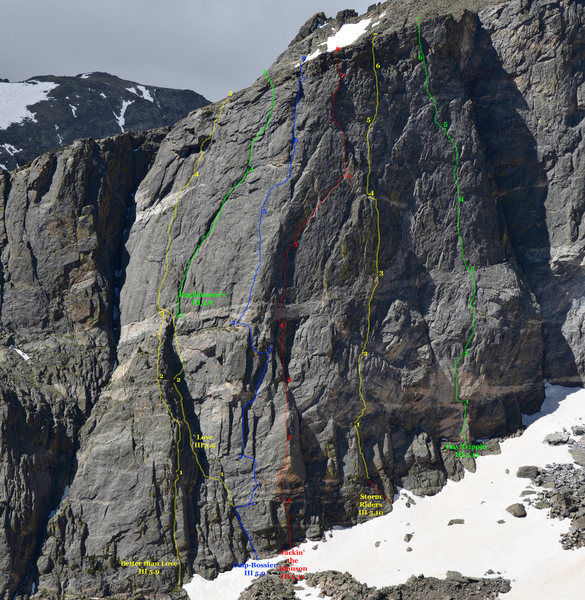 [Hide Photo] Topo of the second buttress on the north face of Hallett Peak, RMNP. 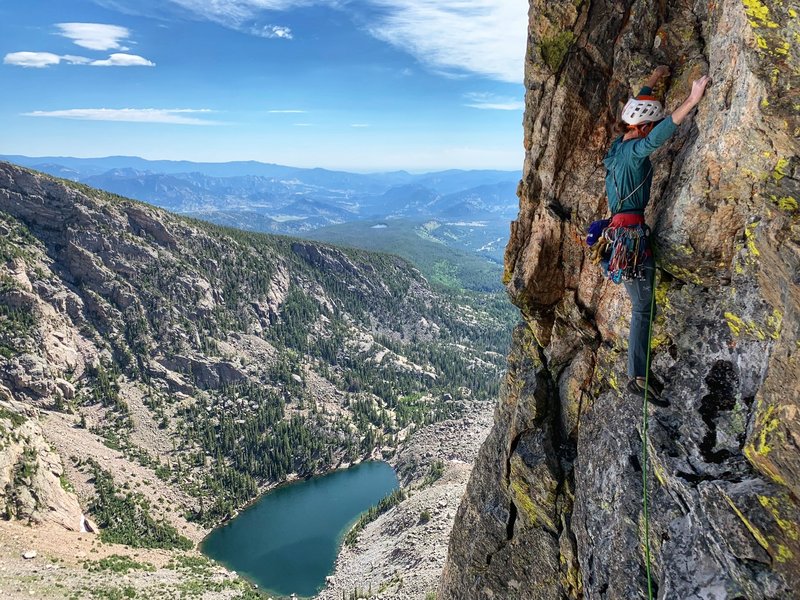 [Hide Photo] Daniel starting up the corner on pitch 5. 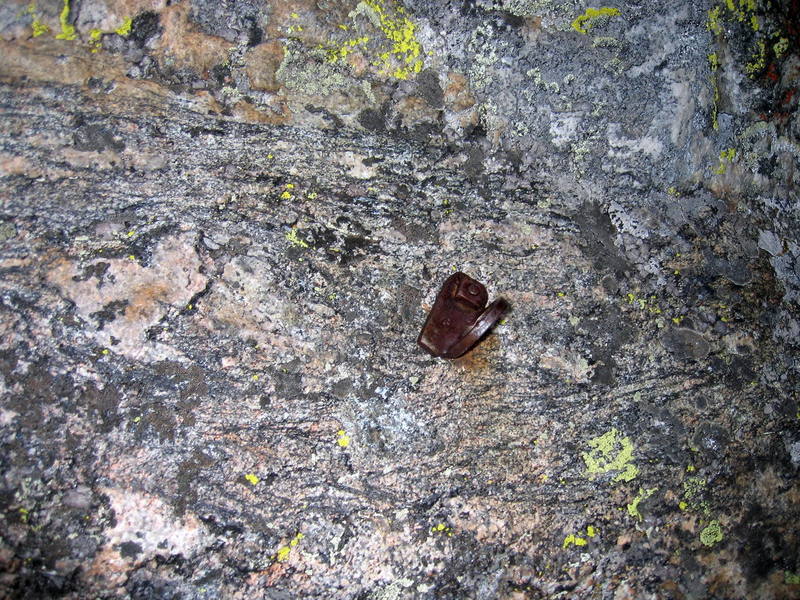 [Hide Photo] One of the original bolts from the Jackson-Johnson. Notice the hanger is a lost arrow piton cut in half with a hole drilled through for the bolt. 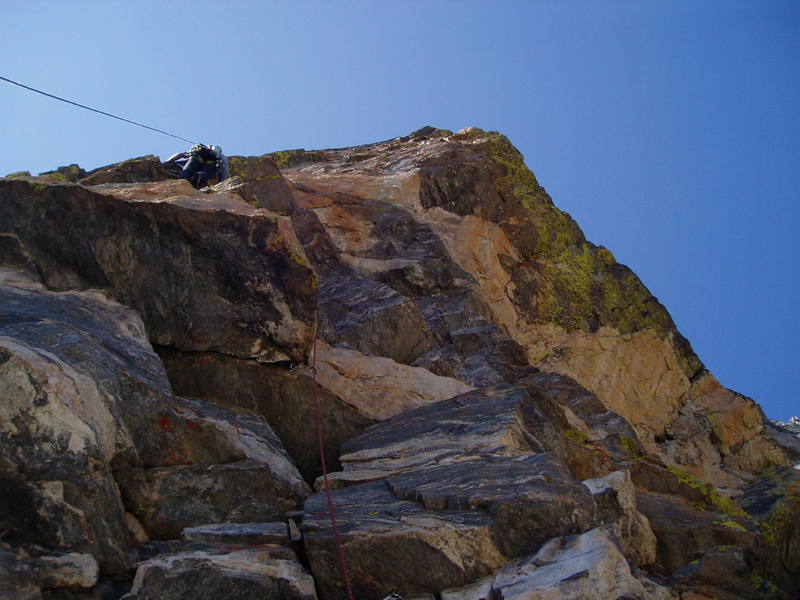 [Hide Photo] Heading into the business on P2. 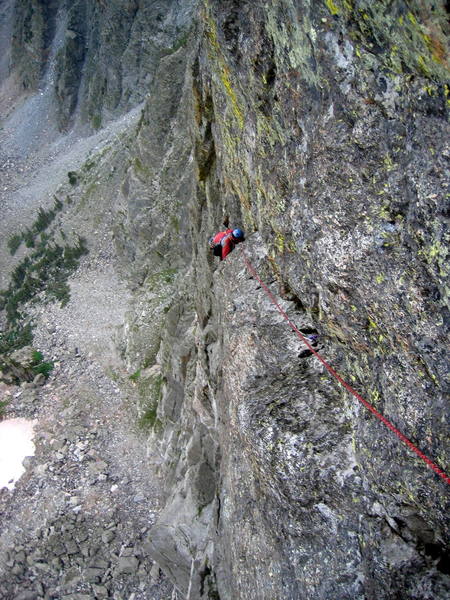 [Hide Photo] Near the end of the 61 meter ramp. 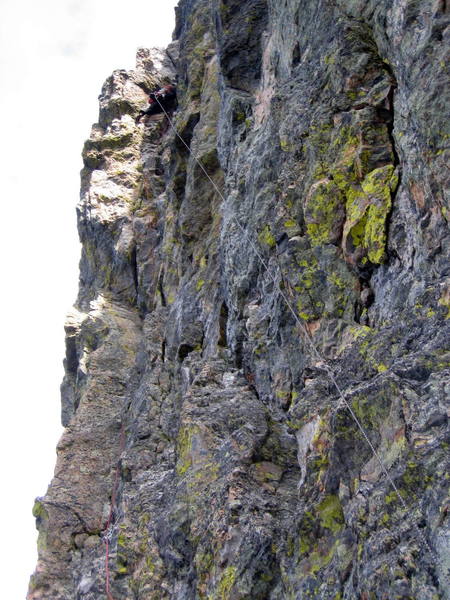 [Hide Photo] The crux pitch on the Jackson Johnson in evening light. 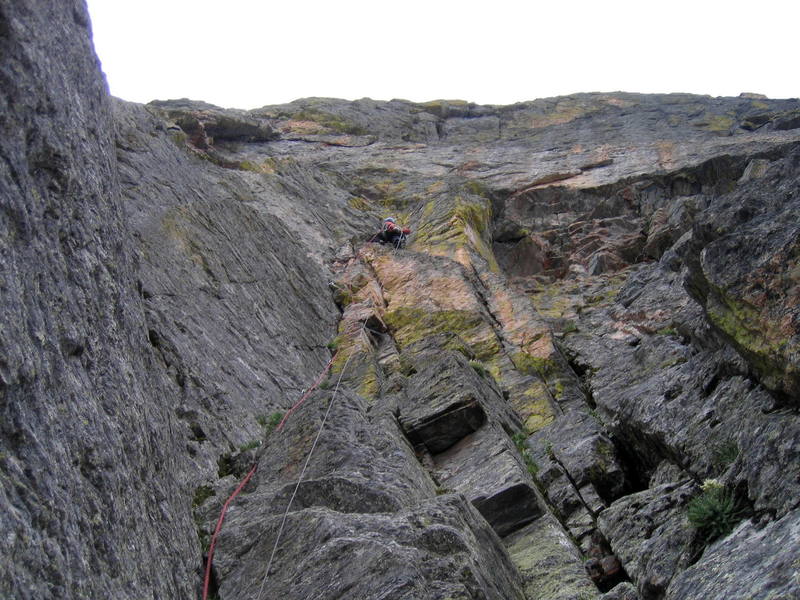 [Hide Photo] The quartz cracks of pitch four with the right-facing, 10a corner of P5 looming above on the left. 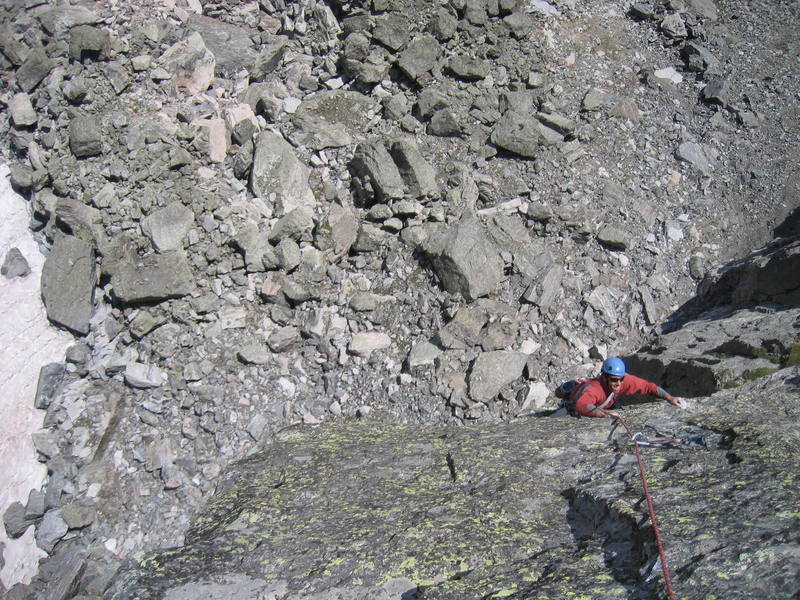 [Hide Photo] Shane pulling the final bulge onto the slab of the 2nd pitch. 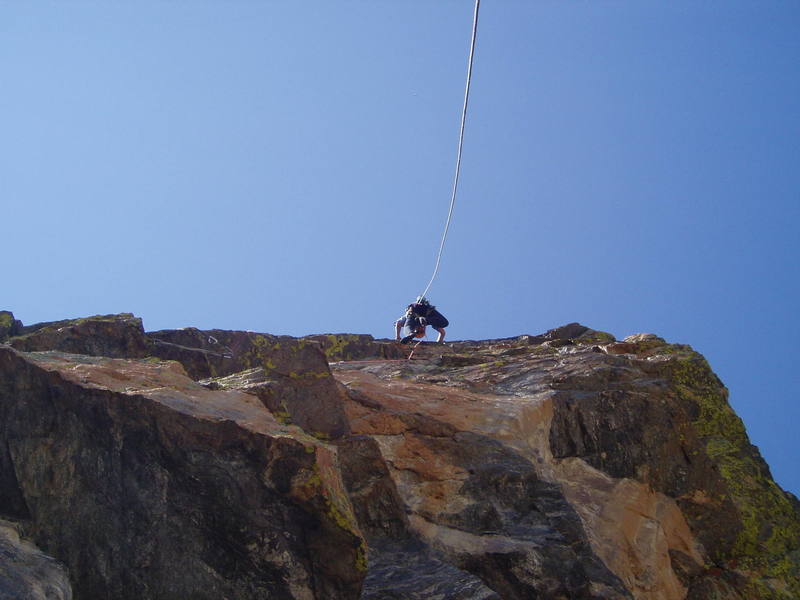 [Hide Photo] On the crux second pitch - long runners below the roof and through it make the rope-drag on this pitch reasonable.