This route goes up the knife blade east ridge of Wolfs Head. To get on the ridge there are 2 different options. IMO the easiest way to gain the ridge is to scramble 4th and 5th class up the gully in between Pingora and Tiger Tower. Summit Tiger Tower, then do two, 40ft raps on to the east ridge of Wolfs Head (see picture on wolfs head page). The other way, is to scramble 3rd and 4th class up the south face then up to the ridge.

Once on the Ridge the climb goes at about 10 pitches but many of these can be combined or simul-climbed. The description below is what worked for us.

1.) Start by moving west along the ridge aiming for a 30ft slab that's about 3ft wide with a 30 degree slope. Scamper across this beautifully exposed bridge (5.2), then run the rope out for 195ft until you find a belay. (mostly exposed 4th class)
2.) From here its roughly 3 pitches of easy 3rd and 4th class climbing along the ridge. This can be easily simul-climbed and highly recommended. End at a ledge 10ft down to the south (left) of the ridge, just before the first tower.
3.) This is the first of the tower pitches. Pass this tower to the south by making a exposed step around a boulder. After this look up and you will see a chimney in between the towers, go through this chimney (tight squeeze) to gain a ledge on the north side of the next tower. You can belay here, but I recommend to keep climbing to link this pitch with the "piton pitch". Follow 4 or 5 pitons for some delicate exposed face climbing (5.6). After the last piton go straight up and belay on the nice ledge.
4.) The best pitch of the climb. From the belay move straight up the layback flake for 20ft. Once on top, go up a finger crack for 10 feet to gain a beautiful hand crack traverse 5.6(still on the north). After the traverse move up to the top of the knife blade ridge for some beautifully exposed climbing. At this point you should be eye level with the "Darth Vader Tower". Belay in an overhang on the south side of the ridge under the tower.
5.) From the belay move out on to the south face to traverse a 4in crack. Going feet in the crack is easier but hard to protect. You will see a chimney down left, your aiming for this. Follow a slanting hand traverse using "black nubbins" to gain the chimney. Climb the chimney until you see a hole that you can dive through to bring you back to the north side of the ridge. Belay on a ledge on the north side of the ridge.
6.) From here you can simul-climb to the summit staying mainly on the north side of the ridge. (mostly 4th and 5th class)

Descent: There are many ways to descend, the goal is to rap to the west until you can hike south to the gully in between Wolfs Head and Overhanging tower. All the raps can be done with one 60m.
1.) Find the slings on the West side of the summit, rap down 80ft to a ledge.
2.) Walk 10ft to the west to find another group of slings in a boulder alcove. Rap 70ft to a ledge.
3.) Walk to the south west along a climbers trail to locate the next set of slings on your right. Rap another 90ft to a ledge.
4.) Carefully scramble down the trail to the next set of slings. Rap another 95ft to a ledge.
5.) If my count is right, here you will walk along a trail for about 400yds to the south toward Overhanging tower. Do another 90ft rap to the saddle in between Wolfs head and Overhanging tower.
6.) Follow the cairns for a while still heading south. Eventually this takes you to a station that will allow you to rap into the gully formed by the saddle. It looks like it should be a double rope rap, but one 60m will be fine. After rapping scramble up the gully to the east bringing you back into the cirque lake basin.

There are many options, and this may sound confusing, but the trails are well worn and marked with cairns, and all the stations were very easy to find.

Standard alpine rack. Doubles of everything to #2 camalot. A single #3 is very useful and recomended. 1 60m will suffice, but being an alpine climb having 2 ropes will make it much faster to bail in event of a storm. I brought 2 ropes and was very upset to only use 1 the entire climb. 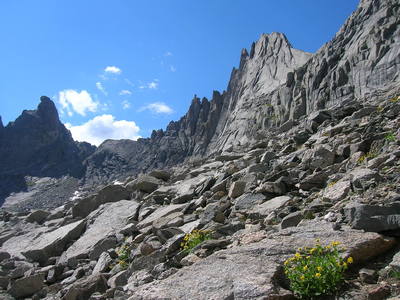 A view from the south of the knife blade ridge. 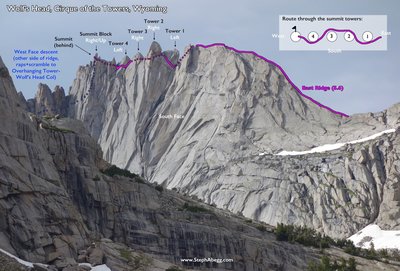 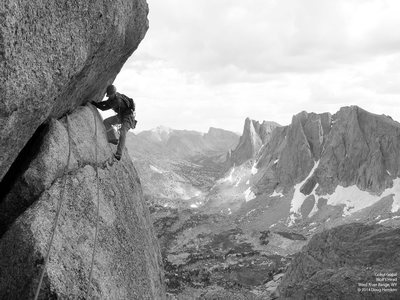 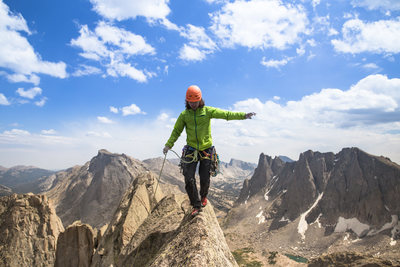 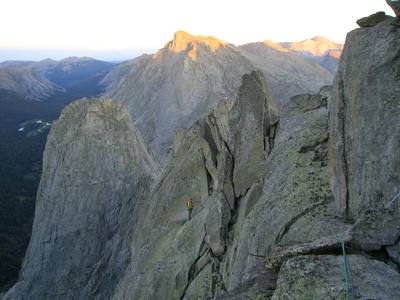 The view looking backwards from one of the last… 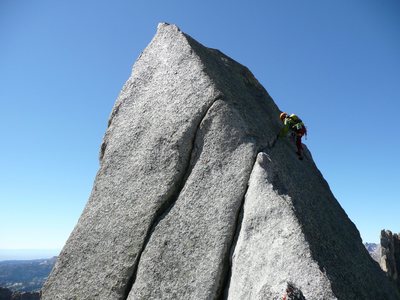 Tobin, up high traversing on the north side. 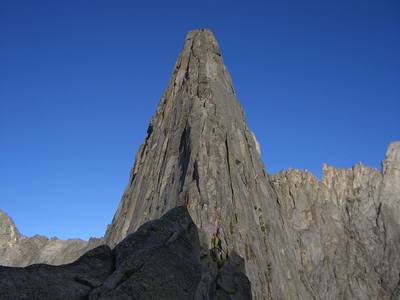 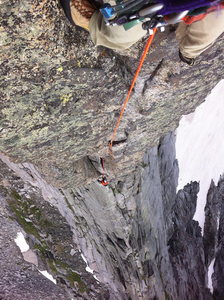 Looking down from the 1st tower pitch 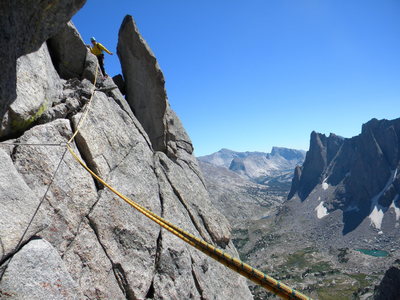 Exposed step around the boulder pitch 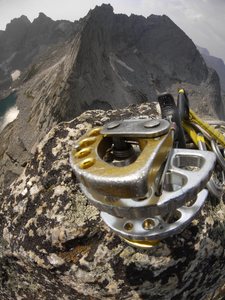 The East Ridge of Wolf's Head as seen from the… 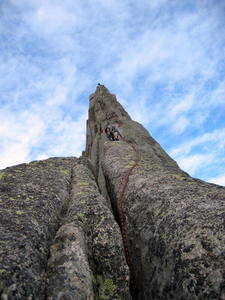 Starting out on the ridge. 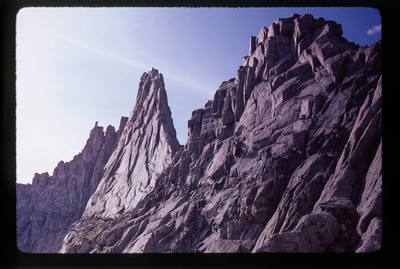 A view of the East Ridge.