Not the best rock in Sedona, though the line does have a hard to define allure when you first lay eyes on it. Maybe that’s just the masochism kicking in. Or it could be the pull of the neighborhood vortices and world class views. The route was named for the many large blocks which took extended flights during the ground up first ascent. This process of shedding death blocks is a transformative one taking a mere human and turning them into a force of nature. Trundler’s Club is an adventurous, heart kicking route. The line cleaned up pretty well for Sedona, with the middle three pitches standing out as the highlights. Onsighting the steep and intimidating fourth pitch is a true test of Sedona skills for many. The formation faces south east.

Pitch 1, 5.8?, 140’~, Start up the slab to big hueco. Continue up casual terrain until a small bulge which is more awkward to pull than difficult. Small to medium cams and bolts take you to a comfy two bolt belay. The true definition of an “approach pitch”.

Pitch 2, 5.10+, 100’ Work your way up the stembox past some decent gear and bolts. At the little cap roof, shuffle right and make the "cross to the choss" move and then up the long, steep crack which gets wider as you go. A two bolt belay awaits you in the fairly spacious, though a bit dingy Bat Cave. At the top of this pitch keep an eye out for the lone pocket on the right wall to avoid too much offwidthing... Bolts and doubles to #3 and a #4.

Pitch 3, 5.9, 40’ Stem out the cave on the climber's right past bolt and up to a fingery layback/stem system. Look for crimps and moves leading left around a corner to a hidden ledge and two bolt belay. Small medium cams, bolt. A short, exposed, and fun little pitch.

Pitch 4, 5.11-, 85’~ Thee money pitch for sure with very airy exposure. Somewhat intimidating steep lay backing up the featured crack will eventually lead you past a bolt and up to a small roof feature. Bust a gut on the cruxy mantle move. Follow unique face holds and bolts up to a two bolt belay.

Pitch 5, 5TH class, Traverse gingerly to the climber’s right past bolts, delicate rock, suspect gear placements, around corner, and down to a nice ledge with belay bolts. This is the Party Ledge, of course, and the top of Mind Trick. Also your point of ground return. Hope you enjoy.

The rap route descends on the Mind Trick anchors. Bring a 60, or preferably a 70 meter rope. All stations are steel.

Rap 3: 90' or so to a slopey ledge. NOTE- pay attention when pulling the cord!

​​​​See the description on the main page. This line starts below a giant heuco which is roughly 8' off the ground, and you climb up to it, and pass it.

Bolts and a standard Sedona rack of doubles up to #4 Camalot. 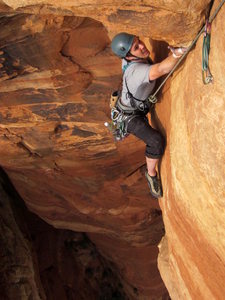 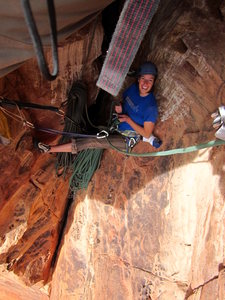 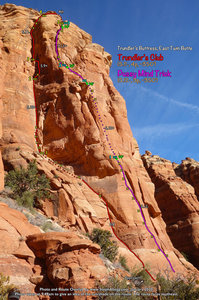 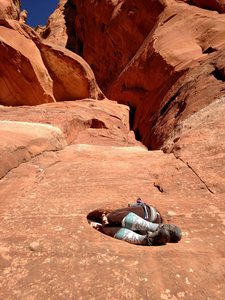 When starting the route, watch out for the huec… 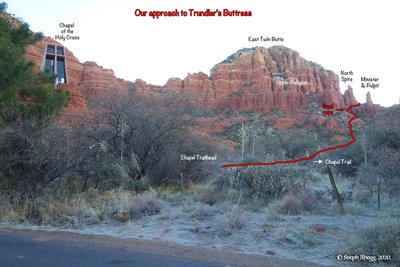 Our approach route to Trundler's Buttress. 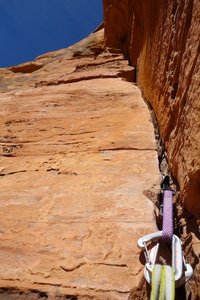 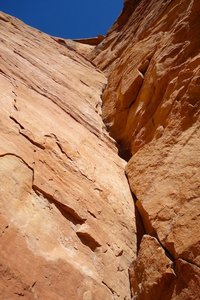 Looking up Pitch 4. The crux is near the top. 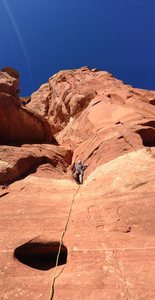 A little ways up pitch one 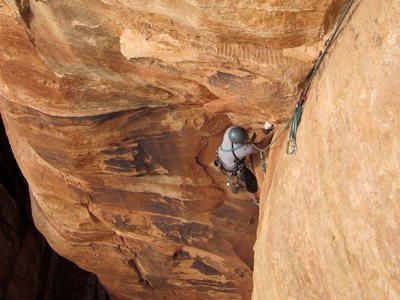 Roman busting a gut up the weird mantle 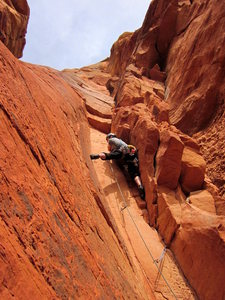 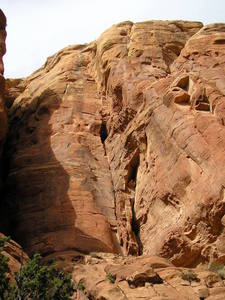