Much more demanding as a cardio undertaking than as a technical one, this climb is a must do for the inspiring views it provides. The ascent probably does not merit four stars, but the abrupt view from the top does.

From the north end of the Lupine Meadows parking lot, take either of two trails (they quickly merge) which head towards Teewinot. The trail is quite smooth and well graded. Encounter the first of the 18 infamous switchbacks after about 1/2 an hour then follow these, mostly through steep, open meadows (no shade, lots of flowers in mid summer) for about a thousand feet of gain. My experience was that the SBs go faster if you count them. At about 9000' the trail hits a ridgeline along which are the only reasonable potential bivy sites (check w/ the rangers about the availability of water). Around 10500', just below two spires, The Idol and The Worshipper, you will likely encounter snow. Somewhere around this point it would be a good idea to get your bearings and study the configuration of the summit ridge -- routefinding is straightforward if you do this, but plenty of people get lost anyway. The general idea is that you want to aim for the tower immediately to the right of the central drainage/gully/chimney system the upper reaches of which in early to mid season will have snow to the skyline. Higher on the mountain the snowfield can be hidden from view so try and pick out a couple of distinctive features on the high on rock towers to maintain your bearing. From the 10,500' point, go right/north around the I & W -- we followed steps up easy snow (~30 degrees?) for about 300' gain; in the conditions we encountered it, crampons were not needed for this section, but an ice axe was nice to have. Once the snow ends, scramble for several hundred feet. I ascended to the south of the central gully and descended to the north. The trail, hard to find with snow, seemed to be on the north which was at any rate the easier way to go. Finding the easiest line involved a fair amount of zig-zagging. The crux was just below some red rap slings on the south side. The scrambling was less enjoyable than I expected due to the slopey and dirty nature of much of the rock. About 500' below the summit, follow easier (mostly class II) ground on the north side of the drainage to the top.

Your exertions should be amply rewarded by the summit views from Mt Moran down to Buck Mountain with a particularly compelling vista of the north side of the grand.

Helmet, ice axe, crampons, harness, 30m rope, small rack.  Routefinding and steep ice/snow can be the crux of this route.  It may be rated 4th class, but the Tetons are notoriously sandbagged.  Even the "easiest" rock route has a few slabby 5th class moves.  The snow/ice in the steep Narrows section is NOT easy and several falls from here have been fatal. 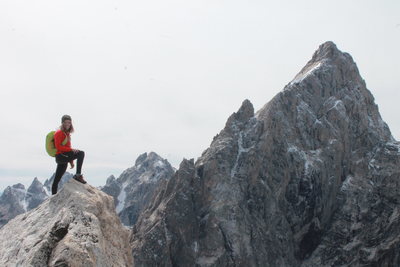 On the exposed summit with the grand just south! 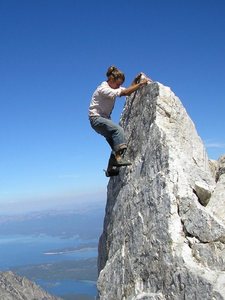 Good photo op on this exposed block near the su… 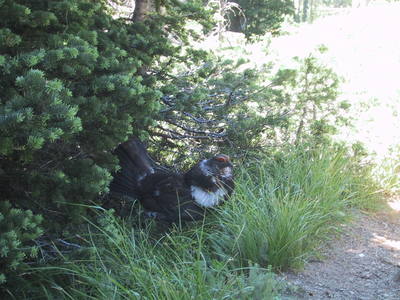 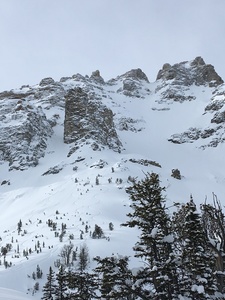 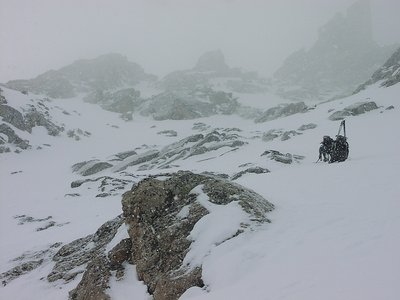 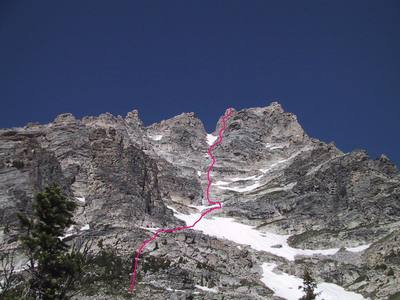 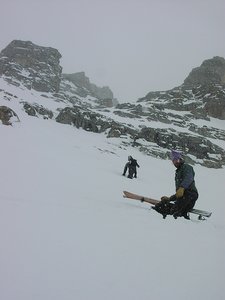 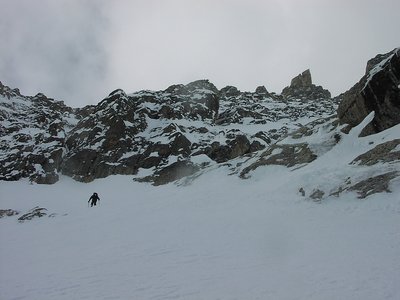 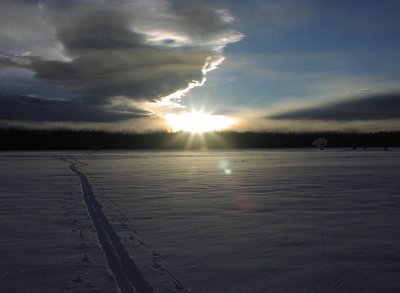 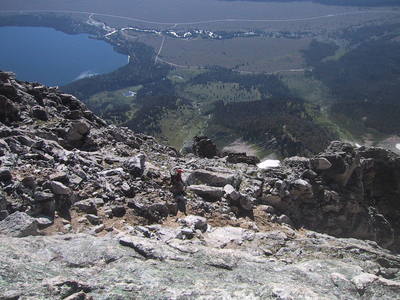 View from near the top back down the route. Wit… 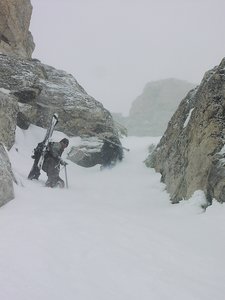 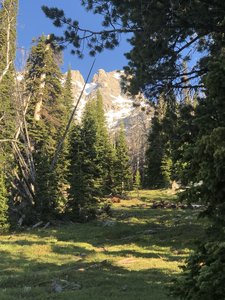 Zoom in to find my friend Mrs. Grizzly. Unexpec…