This is the easiest route to the classic summit of Lone Eagle and in reverse is also the descent from any route summiting Lone Eagle (including Solo Flight itself). While "only" 4th class, it is very exposed and features devious route finding on terrain that quickly exceeds 4th class if a wrong turn is taken, which can easily happen despite the numerous cairns en-route, especially when climbing the route for the first time in reverse after an ascent of the N. Face route. I won't say anything else about that other than if going in reverse, look in every direction for the next cairn, and don't misinterpret a random pile of rocks!! I excerpt here almost verbatim (differences in []'s) from Gerry Roach's description of Solo Flight, from the 1989 Indian Peaks Wilderness Area Guide. The differences are mostly because it seems to me that some of the directions were off. Also because if you try to follow directions too carefully on this climb, you have to enjoy being totally confused, so I'm trying to confuse you even more (e.g. just follow your nose).

Stay below the cliffs and continue south to a point where you can look down on Triangle Lake. It is 0.5 miles from the base of the north face to this point. It is not necessary to go to Triangle Lake, only to see it. The cliffs of Lone Eagle finally start to relent and the route ascends southwest up a ramp bordered on its north side by a dwindling cliff band. Look sharp for a good place to leave the ramp and climb northwest (right) up through this cliff band. There are at least three places to ascend this cliff band with 50 feet of Class 3 climbing. Some cairns mark the upper two places.

Once you are above the dwindling cliff band, traverse north on a broad ramp. You are finally headed toward the summit instead of away from it! After 200 yards of traversing, do an ascending traverse northwest up broken ledges to a pair of small notches in the convoluted ridge. This ascending traverse follows the path of least resistance and involves an occasional Class 3 move. The two notches are [along a spur from the north-south ridge].

The view north from the [south-east] notch can be disheartening at first, but at least you can finally see the summit. It is 250 yards north and below you. The summit is not the highest point on the ridge, but it is the farthest north. Climb [south] through the [south-east] notch and descend 20 feet on the [south-west] side of the ridge (Class 3). Turn [north-west] (right) and climb 30 feet into another notch with a curious chockstone in it (Class 3).

From here on the route is exposed and more serious. There is a steep gully descending north from the notch with the chockstone in it. Get on the west side of this gully, traverse north and descend slightly to a series of easy ledges 100 feet north of the notch (Class 3). There are at least two ways to accomplish this maneuver. These ledges are on the east side of the ridge running north toward the summit.

Traverse north 100 yards on the ledges (Class 3). When the ledges bump into cliffs, descend 70 feet east down a south-angling Class 4 pitch to a lower series of ledges. This pitch is the crux of the route and can be downclimbed or rappelled. If desired, a rope can be left in place on this pitch to aid the return trip.

This is a complicated route, but take heart. It follows the path of least resistance, consists mostly of easy Class 3 scrambling, is festooned with cairns and, most important of all, leads to an incredible summit.

Located in Lone Eagle cirque, above Crater Lake in the Indian Peaks Wilderness. Approach from the East via Pawnee Pass (park at Long Lake TH, 9.25 miles), or from the West from the Monarch Lake TH (7.8 miles). Easier from the West than from the East, but we did it from the East and this was nice too. Camping permits easily obtainable for $5 at the Forest Service office in N. Boulder or elsewhere. Camp either around Crater Lake, or, possibly better, above Mirror Lake. Regular folks like me will probably hike in, camp, climb, camp, hike out (e.g. 3 days), but some people do it in a day - you know who you are. 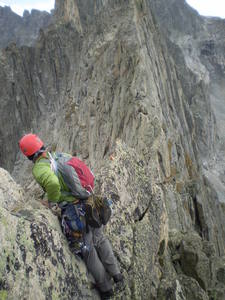 Dane"ger" Johnson scouting out the descent of L… 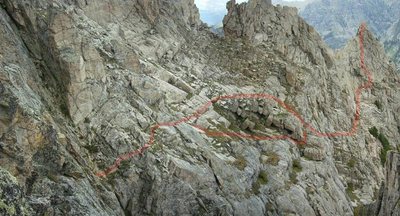 Ridge north to Lone Eagle, from the first notch… 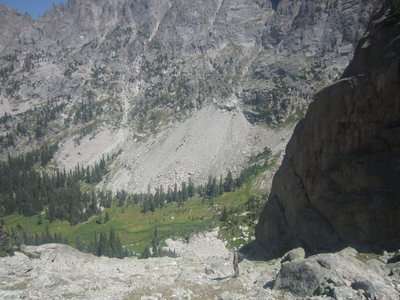 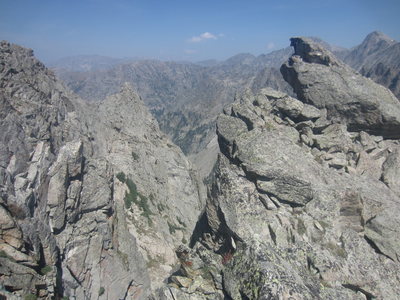 The top of the shaded buttress facing back. Lon… 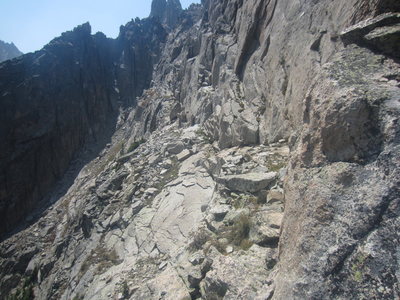 Looking back along the ridge, notice the shaded…