Start out on chalked-up but not-so-positive holds to some decent holds for clipping the first few bolts. After the third bolt the climbing becomes steeper and a bit run-out to a difficult clip at the fourth bolt with a fixed chain draw. Chalked up holds around the fourth bolt look appealing but don't offer much for a good clipping stance. Figure out the clip and punch it to better holds past one more bolt and the anchors.

This route is on the southeast side of the Beer Block at the top of the narrow passage between Beer Block and the Big Pine Wall block. 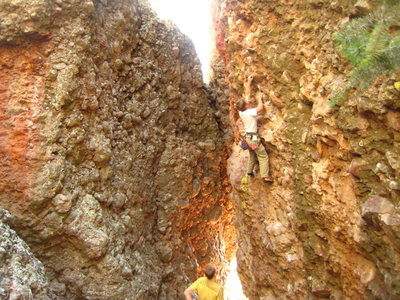 George getting ready for the business on Villag…