Chicken Lips is a good route. It has friction, thin face, hand crack, layback, and chimney climbing spread over a logical line up a very cool piece of rock. However, it is solidly in the 'adventure-climb' category and will stay there until it gets re-bolted. If your experience on a climb is tarnished (or inflated) by poor protection and face climbing on hollow flakes, you may adjust the quality rating of this climb accordingly. There are a lot of bolts on this route, most of which are rusty 26 year-old 1/4"s. Occasionally, there is a 3/8". Most hangers are the dubious SMC hangers, although there is the occasional "JU" homemade hanger for nifty historical context. Unfortunately, you can not rely on trad pro to bail you out in most bolted sections.

The route gets a lot of sun, as it is a similar south-facing aspect to the Eagle Wall. The upper couple pitches will be shady earlier as they are in a chimney system.

P1. Follow awful bolts up thin face and friction (can be very sandy!) to the ledge under the obvious left-facing dihedral. ~100' 5.10-

P2. Climb up the fun dihedral crack until it bottoms out and you can escape right to a broken section above a tree visible from the beginning of the pitch. Then head back and left to a belay in the right-facing corner. ~130' 5.10- (The Urioste guide mentions a 5.7 variation that escapes right from the belay and then goes up to the tree. However, the crux dihedral on this pitch is the only 5.10 climbing you'll do where the pro is good, so enjoy it!)

P3. Continue up the corner ramp-handcrack until you can see the crack bottom out above you. When it looks easiest, step left onto the varnished face of the corner, and then out onto the arete! A few bolts take you to a stance with two bolts. One is a 1/4" rust-a-thon. The other is a 3/8" spinner. SMC hangers, but no visible cracks. There is no real back-up pro, although I put a couple awful small nuts in sandy flares for the fun of it, and it's possible that a ballnut might be slightly more secure. But still awful. ~130' 5.8 (with a 70m, you could *probably* set up a trad belay in the main corner before the step left to the arete, and then link the remainder of this pitch and the pitch above, thereby avoiding the anchor.)

P4. Go straight up the arete, past many bolts, to a large ledge with an enormous pine tree. There is a little pro in horizontals to back-up the bolts. Generally, you step to the arete, or even reach around it, for the path of least resistance. A lot of the rock is delicate on this pitch. ~150'. 5.10-

P5. The clean varnished dihedral above you is the last 'hard' climbing on the route. Layback the entry moves, and clip (or don't clip!) the bad bolts. Good gear can be found in the back of the crack, if you are willing to peek around the corner. Continue up into a notch past easier (but mandatory runout) climbing to another stance. The Urioste guide says to belay at 120', but I liked the stance and the gear better at around 180', which is about 20' below a white overhang guarding the rest of the chimney system. ~180'. 5.9

P6. Continue up past one bolt and the slightly rotten overhang, and keep running it out on slabby sandy ramp-chimney to a stance. at least 100' (?) 5.7/5.8

P7. Keep going up. Eventually you will punch out into the sun on a little sandy 4th class with a big mostly-dead tree. For me, it was ~200' to the tree. This pitch is awkward 5.6 chimneying, or provocative face climbing outside the crack on delicate holds. From the tree, scramble a few hundred feet to the ridge crest.

The descent is much trickier. You could walk all the way to the main eagle wall descent and come down that. it would require leaving your pack way down in the drainage, and is a great descent but long and potentially wet and fugly if the canyons are running.

the Urioste guide describes a scrambling/rappeling descent that takes you to the high point of the Black Orpheus formation, which is a hop, skip, and a jump from the base of the route. I don't want to quote the Urioste guide. If you are interested in this kind of route, you probably already have it anyway. However, their description was a little unclear to me, most likely my own failing, and i spent a little time trying out different exposed 4th/5th class descent gullies until i found one i really liked. based on the Urioste description, my descent gully sounded a little less technical, so i will describe it here.

From the top of the route, walk up/east to the local summit (the high point between higher summits a long ways down the ridge to the east and west) and take some photos. Then head straight down a couple hundred feet to a terrace, and shuffle down into a bowl of broken rock with gullies angling down and skier's left. If you look over the ridge, you can see a red rib of rock a long ways down. That is the the rock that creates the gully you scramble down to get back to the upper painted bowl. Above that is a large ledge with a very large pine tree (and other bushes) and a prominent water-run. You are headed to this ledge. You will see many gully/ramp/ledge systems angling down to this ledge from the ridge. The one I really dig starts here, scrambles down past a big tree and raps off the second one (both visible from beginning of gully). The angle on this gully/ramp was much slacker than the ones further along the ridge to the east. At about mid-point, a platform with a very large live pine tree (the second one, just mentioned) provides a very convenient rap down a 5th class step. I left two slings and a biner here, and encourage you to bring a bit more tat to better establish this painless descent. After this short rap, walk down a few yards, and traverse on pink slab a few yards away from the face. then 3rd class down easy slabs, past a butt-slide move, to more ramps to the big ledge. the gully right next to the cliff here is bushy and more difficult than the chill (but slightly exposed) 3rd/2nd class ramp to the ledge. from the big ledge with the huge pine tree, scramble down and right to where the water run is, and peek down around the corner to the left. Hidden under an overhang is an established rap station (2 old 3/8" bolts on SMC hangers with plenty of webbing/rings). 100' rap here (or slightly left of fall-line to keep rope out of water) to a notch where you walk left on a red ramp. A 60m rope is fine for this rap. A short 4th class step at the end of the ramp takes you down to the top of the black orpheus formation. choose your favorite way to get down from here. (hug the face down a gully past slippery 4th class to regain the base of the upper painted bowl, or head down the slabs to the better single-rope descent into the lower painted bowl)

i built a bunch of cairns at the beginning of the descent gully/ramp on 4/11/06 leading into the gully. they are not visible from the ridge crest. you need to descend to the lower terrace to find them. i will also post a picture of the descent.

i have gone into great detail with this descent description because it is a useful descent from the eagle wall and upper painted bowl. its really quite cruiser and doesn't take much time at all. it has no hard/scary sections if you hit it right. you could consider building a couple critical cairns while you're there so folks are not wandering all over the place, and i imagine it will become a standard descent in a few years.

I would bring a good selection of nuts, from tiny to large. The route does not wander much, but extending slings are definitely nice to take advantage of the pro you can get. Double cams green alien to #3 are good, particularly because a number of the belays require hand-sized pieces if you are into the classic three-decent-pieces thing. hand-sized hexes are just as good at all but one belay, although you still might want an extra cam or two. a blue alien wouldn't hurt, either. If the route has not been rebolted, seriously consider bringing a drill and a bolt to replace at least one of the anchor bolts at the bolted station. and screamers. bring as many screamers as you can get your hands on. 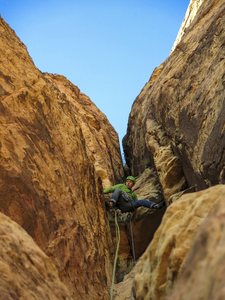 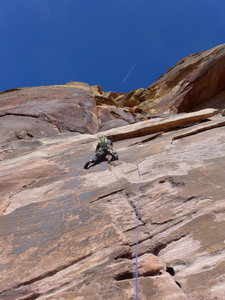 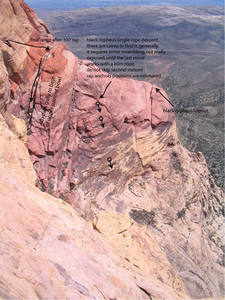 the second half of the chicken lips descent. 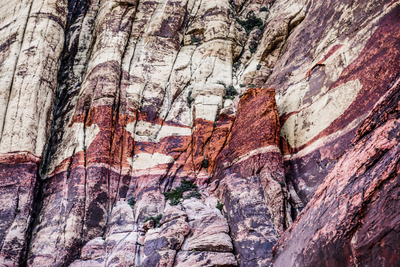 You'll know you're getting close to Chicken Lip… 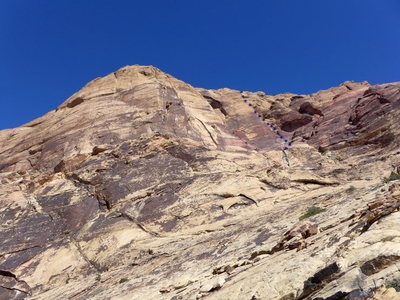 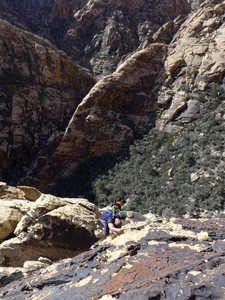 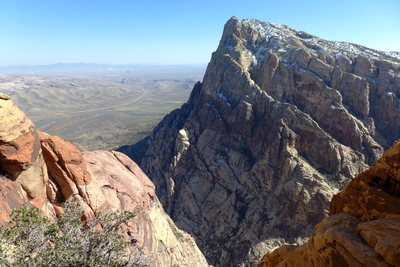 Mt Wilson from where the route tops out on Rain… 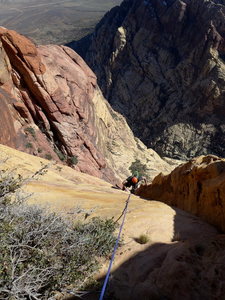 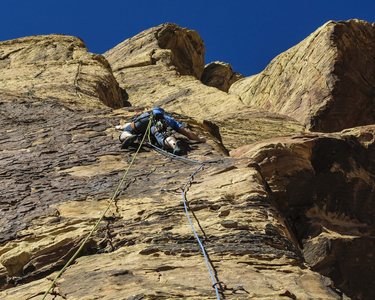 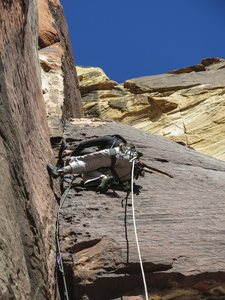 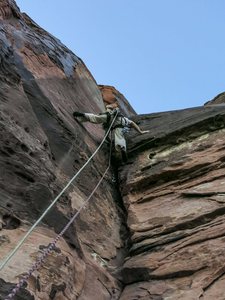 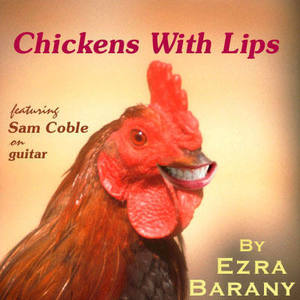