Moving from the west to the east, Route #6 on Ridgeline is listed in Fazio-Rhicard's StL II as "Wind of Change." A dead ponderosa pine marks this line if you wish to try a direct, "plumbline" approach. But, be warned, the moves are thin, and reachy (they felt 5.9b in difficulty) and there is a full 15 feet of "unprotectable" rock separting the leader from the first bolt. This is not the original start, and most people opt for the saner 5.6 start that is found 4 to 5 feet further to the west (left) even though this brings one very close to the bolts for "Never to be the Same."

The "fun" really starts above bolt #6, where the line of the route bends some 20 degrees to the left as it runs up to the chain anchors. Here, I have some major problems with the ratings assigned to "Wind of Change." This route is rated in FR's book as a flat 5.7, while an older book by Trent Baker ("Select Sport Climbing/ Toproping Guide to Mount Lemmon" 1996) actually demotes it to a 5.7-. As I remember it (from about 1994) "Wind of Change" once ended on the same set of anchors used for "Two Birds with One Stone," so, back then, it may indeed have been a simple 5.7. But now, the finish has apparently been altered (some time after 1996?) so that "Wind of Change" currently ends some 10 feet to the left (west) of the anchors for "Two Birds."

This seems a small alteration -- but one that has upped the difficulty of Route #6 considerably. Nowadays, the 10 feet at the top, between bolt #6 and the anchor chains, is rather more annoying than its appearance might suggest. Although the rock is highly textured here -- and it even slants favorably inward a bit -- the majority of its knobs are shallow, rounded and not particularly comfortable for either hands or feet. After just having led the 5.8+/ 5.9- "Glowing in the Distance," I had expected "Wind of Change" to be a more reasonable ascent -- it was not. In fact, on this particular day, I felt less secure on "Wind of Change" than I did on "Glowing." I certainly was forced to pay much more attention to foot placements here on Route #6. While there are some serviceable holds in this finishing section of "Wind of Change" (even a few 1/4 inch pockets for single digit placements) they are not readily apparent and it requires a good deal of effort to find them. Also, there are no real bucket rims like those on "Glowing in the Distance." Climbers expecting a genuine 5.7 experience will probably be surprised to find that this altered crux section for "Wind of Change" is at least a solid 5.8, and as I dragged my way to the chains on arthritic fingers I was mumbling (under my breath) that it felt more like a 5.8+. Good, sticky, shoe rubber is a definite plus on this finishing sequence!

Bolts and top-anchors updated by CASA in 2016. 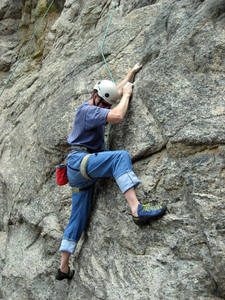 Starting moves on Wind of Change 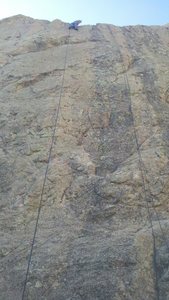 Topping out on Wind of Change

More About Wind of Change