Named after Suntoucher guiding services in Albuquerque, NM, this four pitch route is a mixed bag, with a combination of both good and bad rock. Despite the questionable quality of rock on some of these pitches, I did enjoy the route. But, as with many Diablo routes, WEAR YOUR HELMET!. I was not completely thrilled about the first two pitches, however, the third pitch is STELLAR and on beautiful rock, and the crux section (very top of the climb) is on immaculate rock with awesome exposure (formation called The Shield)! I would give this route four stars, but the first two pitches, and the first section of the fourth pitch, bring the star rating down just a little, in my opinion. So 3 stars.

P-1 (5.11a)*: Climb up mediocre rock (appears crumbly but nothing came off! Looks like dragon scales) to a ledge with a belay anchor.

P-2 (5.10a): Climb suspect rock up a right trending ramp (tread lightly here!) up to the next set of anchors. The climbing is actually easier than .10a, but I gave it a higher rating because it feels harder due to the crappy quality of the rock.

P-3 (5.10d)****: This pitch has great moves with nice exposure climbing on great rock! Beautiful sustained climbing. The route can be made easier or more difficult depending on exactly where you climb it (climbing directly up to bolts vs going off to the side a little.)

P-4 (5.11b/c)**: Starts on suspect rock through the first few bolts, and continues up toward The Shield. There are some rather large boulders along this pitch, so watch out! Will climb go a crack to the left of the headwall. Will not move onto the actual headwall until around the second to last bolt on the route, where you will traverse to the right, EXPOSURE! Clip the final bolt and find the hidden hold (hint, high and right), and pull yourself to glory. DO IT, the fall is completely safe! (NOTE: In JM Beverly's book, this route is listed as 5.10 b/c. THIS IS AN ERROR! I contacted him to confirm the rating.)

At the bottom of the Sun Devil crag, and to the right of the Solar Cave and Sun Devil (the climb).

All four pitches have bolts to anchors (I took 15 draws, and had enough for all pitches). Rap for the decent. Can use one 60m rope for this climb. 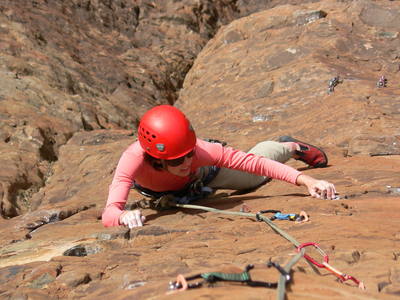 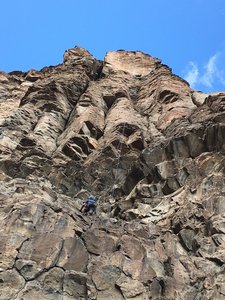 Heading up to P2 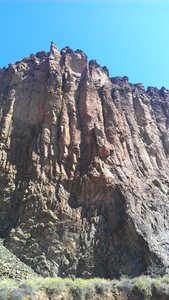 Ben Alford belays Andy Purdy from the second be… 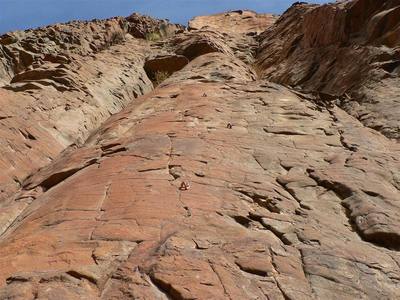 Looking up the enjoyable third pitch of Sun Tou… 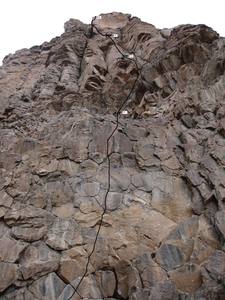 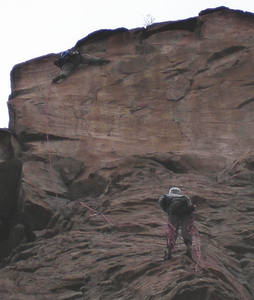 Pulling the crux (the "van dam" move, according… 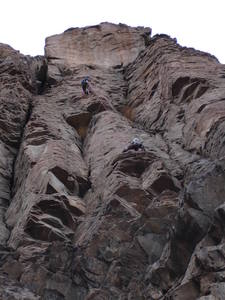 Third pitch of Suntoucher(Kevin and Tony). 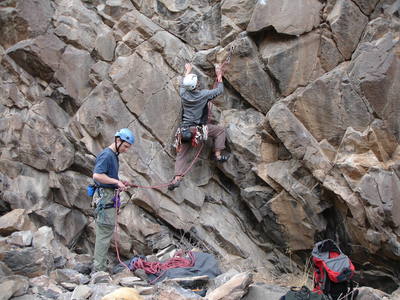