The route takes the ridge at the rear(west) end of the Sphinx, then along a very narrow ridge to its head that is climbed up an open groove on its north side.

Descent: One rap from the summit to the north.

From the parking area at the end of the mile long dirt road, hike up the talus to the west towards a prominent outcrop overhang, and then scramble up right(odd cairns) until the level part of the mesa is reached. Now traverse around the large formation to its left passing walls to the far end. Hike around the end of the walls, and then traverse back around the south side now heading south towards the north side of the Sphinx. Scramble up ledges on the east side of the Sphinx, then along ledges to the right to reach the foot of the ridge and the start of the climb.

The hiking descent from the Sphinx is shorter than the approach. After the climb head south towards the parking area that will be in view to a narrow gully above a black wall of smooth rock. Here are rap anchors. Rap down 80' then head down and across left(east), and after about a quarter mile one will locate the top of an open gully. Head down this and then more easy walking back to the parking area. 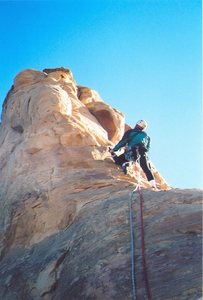 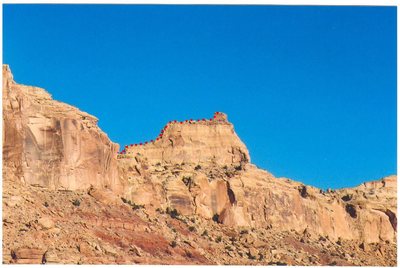 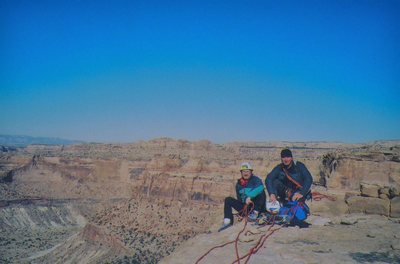 Ross and Potter on the summit of the Sphinx wit…

More About The Sphinx.