Routes in e. The Mac Wall (Something Interesting)

Star Action was my first first ascent (FFA?). See the comments for my version of the story. It's since become very popular--an easier version of Coexistence just to the left. Dick Williams' recent guides call it 10b. Todd Swain calls it 10+. I have no idea, but it's easier than Coex, and likely harder than 10bs in most climbing areas.

P1: Climb the face and up a thin crack at 5.7 or 5.8, with not much gear, to a horizontal. Protect the second, then traverse left and up to the right edge of the ledge. Most parties will belay here.

P2: Follow a thin crack past a few short, thin horizontal cracks to a ceiling. On the FA, we placed a pin in one of the horizontals and one at the ceiling - I don't know if they are still there. In his latest Trapps Guide (aka the Gray Dick), Dick Williams has the crux nailed: "Work/dyno up to a jug (physical crux), then move left into the corner (mental crux) ..."

The move over the ceiling was always at the limit of my finger strength for doing it statically. But the move left into the corner was always the crux for me - you have to extend left from the jug, with not much for your feet, to a layback. Transitioning into the layback is spooky. Once you're there, it's easy. There's another way, though. From the jug, if you're strong enough, you can reach straight up to a positive hold and then just step up to stand on the jug.

Above the ceiling, move up and right to a bolt anchor (obviously not there on the FA; in those days, we would traverse left to the Coex pin anchors to bail after P2 of Star Action).

P3: Rarely done; continue up the right-facing corner to a large roof. Roll over the roof at a break, a la beached whale, at 5.9. Todd Swain's guide says this roof had been done previously.

P4: There is apparently an easy pitch leading to the top. In those days, Dick Williams wouldn't put a climb in the guide if it didn't go all the way to the top; hence many routes included less-than-aesthetic upper or bottom pitches just to ensure getting in the next guidebook.

The Mac Wall access trail is about a 6-min. walk from the Uberfall, and a 2-min. walk from where the East Trapps Connector Trial meets the carriage road. 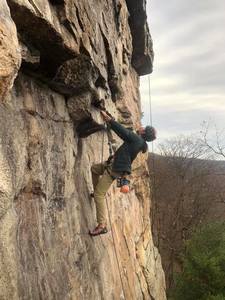 Photo of me contemplating the crux (photo taken… 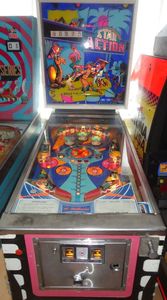