This is a high quality route near the center of Southern Comfort Wall and just left of Black Velvet, although the two routes start in the same spot. From the central pack-leaving area , scramble north and slightly left into a grassy nook and flake rope near a few small yuccas. There used to be an oak tree here, but it died long ago and then finally fell down the hill around 2016. Whereas Black Velvet veers right a few tens of feet above here, the first pitch of Lowenbrau Light follows a more or less straight line up a left-facing corner system to the horizon.

P1 (5.8, 150ft): One of the better pitches in the Organs, with sustained+varied climbing on good granite. The first crux (5.8) is about 30ft off the deck and involves moving left around the first lichen-covered roof encountered. Two more cruxy parts (5.7) are encountered around 50ft and 75ft, with the second of these also turning a roof to the left (look for a clear gap in an otherwise dirty+vegetated crack to the left).  Gear placements are generally abundant and there when you need them. End at a two-bolt anchor on a comfy ledge. From here you can either rappel down (double 60m ropes) or continue to pitch 2. Note: this pitch can easily be split in two by building a gear anchor about halfway up the pitch, just below the second lichen-covered roof.

P2 (5.7, 80-130ft): Also a good pitch, but if you didn't like P1, P2 won't change your opinion of the route. Climb up the corner at the left edge of the P1 belay ledge and mantle over the top. Enter a 40ft right-facing corner/dihedral that gobbles up hand- to fist-sized cams. After exiting the dihedral, either scramble 10-20ft higher and slightly left to a two-bolt anchor (from which a single rope rap reaches the P1 anchor), or else bypass this anchor, build a gear anchor higher up, and then scramble to the old (crappier) rap line.

Start at the dead oak on a ledge. This climb follows a left-facing corner system directly up the face from the tree. It deviates from it only where it follows a vegetated crack to the left to avoid an overhang with a seam at the base of it. Once past that, stand up in the crack and continue up the corner. There are a few chossier blocks, but otherwise it is an excellent route on good rock.

The crux is encountered at an awkward spot only 10m from the oak tree.

UPDATE: the dead oak is gone. It fell down the hill. Start from where you start for Black Velvet.

Folks typically bring a double rack up to #3, a few cams smaller than #0.25, a set of nuts and/or ball nuts, and ~10 shoulder length slings for extension. 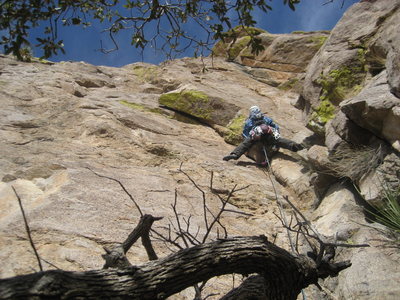 Scott Jones at the starting crux of the route. 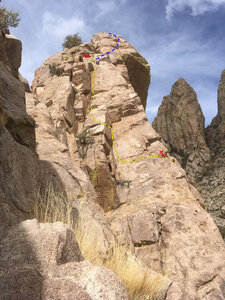 Pitch 3 of Lowenbrau Light as viewed from the I… 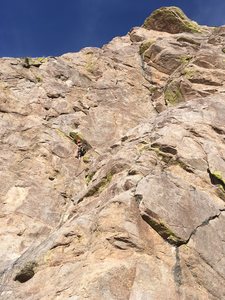 One more photo of a climber (Jojo Matson) leadi… 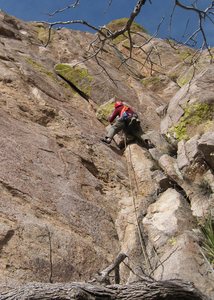 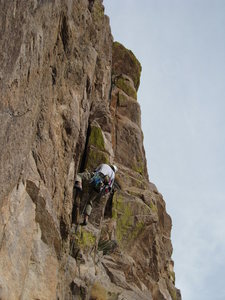 Zack Libbin leads out on Lowenbrau Light. (the… 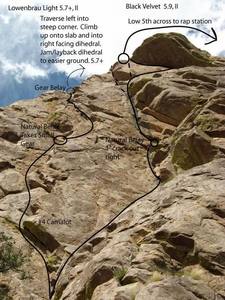