The West Bank / Wild West / Secret Crag has been problematic for years due to access concerns. There have been negative encounters with gun-toting landowners who have alleged that the entire mountain is on private property. Typical approaches involve brief crossing of railroad property which appears to be prohibited.

Exact demarcation of property boundaries are not always clear. When in doubt, be discrete or polite.

Do not park your vehicle near the railroad tracks near Plainview. It is a well-known irritant to Plainview residents.

Access Issue: Closed for raptor nesting from February 1 through Aug. 12? - each year Details

Update from the Flatirons Climbing Council: due to late nesting of peregrine falcons this year (2021), this area is projected to be closed until ~Aug. 12, 2021

This eye catching crack which looks better than it climbs, is so obscure that it was omitted from Rossiter's Eldo guide even though he had included in it Boulder Climbs South.

HH is on the SE face of the North/West/climber's-left mouse ear, starting at about the height of the top of the standard rappels; the full approach is a doozy, requiring the hike to Mickey Mouse and at least three pitches of climbing. All but its first few feet are prominently visible when scrambling west to the raps from the top of Perversion or Captain Beyond. Even though the route starts w/in 50' of the raps, it is a slight pain to get to from there, requiring some scrambling over an intervening fin. The easiest way to get the start of HH is by climbing all of Beagle's Ear, the 3rd pitch of which deposits one within a few easy feet of the start.

The climb itself is about 30' of continuous crack, starting with overhanging sub-tips and widening to hands, followed by 20' of lower angle slabbiness. The crux is in the first 15'. Oblivious to the implications of the route's name, we didn't bring tape which detracted considerably from whatever enjoyment it might provide. If I ever get back on this, my right pinkie will be taped.

Descent: after the crack ends, veer left to reach adequate, but not brilliant, sling anchors. 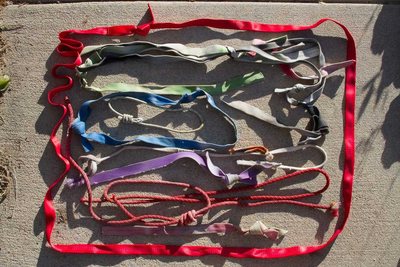 Tat cut off the rap anchor. Replaced all the ta…